One of the largest distribution centres in the UK required a sophisticated and highly accurate steelwork design, one which also needed to include an extremely quick erection programme.

Situated on the ProLogis Park Bradford, the 92,000m² Marks & Spencer distribution centre measures 512m × 176m and is said to be one of the largest warehouses ever built in the UK.

Work on site began in early 2009 and the facility was officially opened in July 2010. Speed of construction was always of the essence for this project and the steel framed structure was erected in 12 weeks.

“We needed to erect approximately 30,000m² of steelwork every week to achieve our target,” says Barrett Steel Buildings Joint Managing Director John Brennan. “Feeding the project with sufficient steel was a logistical challenge, while on site we had to have nine erection gangs.”

In order to achieve the required erection programme meticulous planning was also called for and Barrett Steel Buildings – the steelwork design and build contractor –  undertook a risk analysis to minimise the effect of any potential errors.

One of the main challenges associated with the steelwork design arose, unsurprisingly, due to the shed’s size and proposed usage. The client wanted to maximise internal space and to that end no internal cross bracing was permitted. 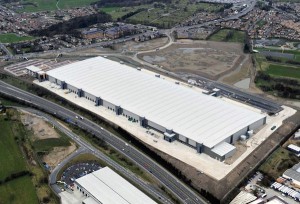 Barrett had to design a complex system of roof bracings which allow the wind loads to be distributed to a series of side bracings, positioned to miss doors, offices and windows.

One of the project’s main features is the roof which includes a series of rafters which are all preset for vertical deflection between the ends of the haunches. This maintains a positive slope for the entire steel roof structure. Although the roof is curved there was a client stipulation that there could not be any negative slopes, as this would create ponding.

Barrett also quickly identified that the combination of a very shallow curved roof over a huge span added up to a few unique design issues.

Firstly, the cold rolled purlins had to run straight, avoid rotation between supports, be pitched at differing points along the rafters, and had to be set vertically at exactly the correct level.

“This meant that every purlin cleat was unique and had to be individually numbered. This unique reference was scribed into the rafters during production to once again minimise the effects of assembly error,” adds Mr Brennan.

Future expansion and adaptability also played a big role in the design, as BWB Consulting Project Engineer Dom Ginty explains: “The steel frame has been designed to accept an additional four levels of mezzanine tied to the portal frame at first floor level.”

Summing up the project, the judges say the exterior conceals the sophistication of the engineering design, fabrication and erection for economy and speed. The extremely slender columns, at wide spacing, soar upwards to support a very light curved roof, avoiding valley drainage. The steelwork is outstandingly light and may well become a benchmark for such projects.