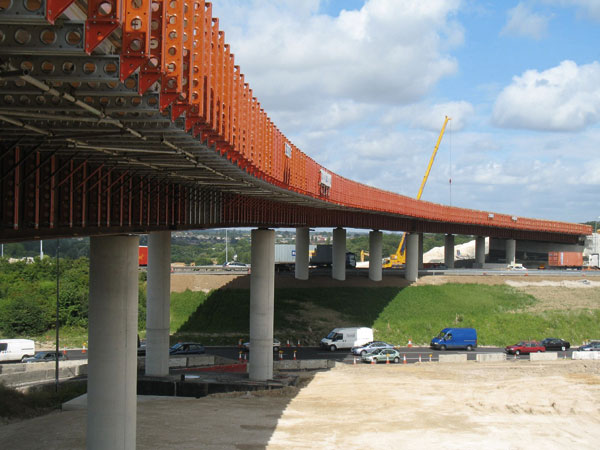 More than 4,000t of weathering steel was used for the construction of four new bridges on the busy A2/A282 junction in north Kent.

Approximately 200,000 vehicles use the A2/A282 intersection in Kent every day, creating considerable congestion, particularly during peak hours. In order to improve the severe traffic flow problems the Highways Agency implemented a number of changes.

One of the main drivers of the project was to divert traffic away from a roundabout that sits below the interchange. This was achieved by constructing new free flow links, one carrying traffic from the A2 westbound onto the A282 northbound, another from the A282 southbound to the A2 eastbound and a third dedicated lane for A2 westbound to A282 southbound movement.

These link roads required four new bridges to carry traffic over the existing highways and all of these structures were constructed with weathering steel.

“Repainting these structures at a later date for maintenance would have been logistically difficult,” explains Simon Reavell, Project Manager for Fairfield-Mabey. “That’s why weathering steel was chosen, it doesn’t need to be repainted and this meant safety, environmental and cost benefits for the client.”

The four bridges consist of a main east to north link flyover, which is a 420m long, nine span viaduct; two parallel five span bridges both 250m long, and smaller slip road bridge feeding traffic onto the A282 from the A2.

Work on the main 420m long flyover began in January 2007 and four weeks were needed to assemble some steel sections on site. Steel erection started in February 2007 with the majority of the steel lifted into place by a 1,000t telescopic crane.

Steelwork for the bridge deck consists of two braced pairs of girders for each span which were paired on site and lifted before being lifted into place. Each pair of girders consists of four steel sections which were bolted together on site and prepared for erection. The decision was taken at the design stage to fit the GRP formwork onto the pre-assembled steelwork at ground level.

“This cut down on crane usage,” says Robert Phillips, Costain Project Manager. “Otherwise we would have had to come along again and lift the formwork into place.”

Summing up Mr Reavell says by using modern fabrication facilities and forging a team comprising designers, principal contractor and steelwork contractor, the project was completed in December 2007, five months earlier than expected. The completed project now alleviates existing and anticipated congestion, improves safety and contributes towards an integrated transport strategy for the area.

The judges agree and say the innovative use of weathering steel on this scale is practical and appropriate.