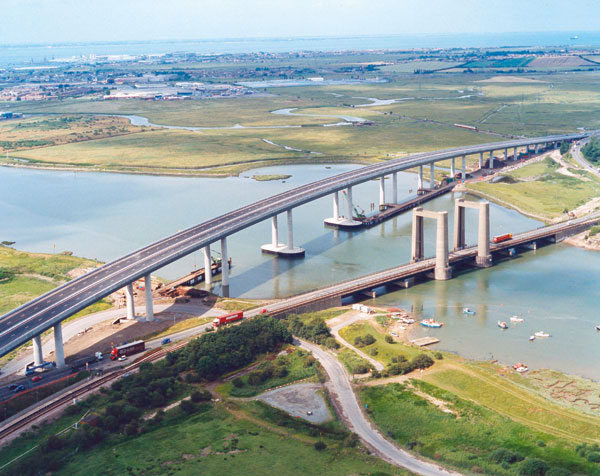 The construction team of this unobtrusive road bridge successfully dealt with some extremely challenging conditions.

The Sheppey Crossing has provided the first fixed link from mainland Kent to the Isle of Sheppey. The dual carriageway high-level viaduct carries the A249 over the Swale Channel and provides a disruption free alternative to the existing Kingsferry swing bridge that has to open approximately 40 times per week for shipping.

The spans grow in length gradually from the abutments towards the main central span, which is 92.5m long, while the structures depth also increases proportionately to a maximum of 3.6m at mid crossing.

The judges said this unusual arrangement produces a most elegant elevation which is enhanced by the sweeping curve of the highway. Because the structure crosses a shipping channel it rises to a crest that provides almost 30m navigation clearance, but the team achieved a solution which minimises intrusion into a flat tidal landscape.

Because of the structure’s location, craning sections into place was never an option and a sequential launch programme was used for the majority of the bridge length. 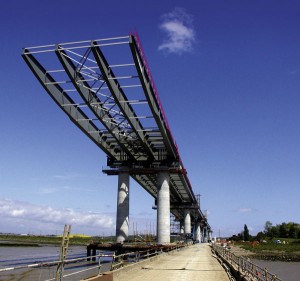 Alex Smale, Project Director for steelwork contractor Fairfield-Mabey, says: “A combination of marine plant and land based cranes just wouldn’t have had the reach or capacity.”

Launching 15 of the spans was the most convenient and cost-effective method. Fairfield launched six spans from the Kent coast, seven spans from the Sheppey side, and then one final section over the adjacent rail lines was also launched from the island side.

“All of the span’s steel members were transported from Fairfield’s Chepstow facility to site and then assembled on both shorelines with a combination of welding and bolting before being launched,” says Mr Smale. “However, the most challenging aspect of this job was to devise a low friction method for launching the spans which would allow the anchorage columns to take the generated loads.”

Once the launch programme was complete the final four spans were lifted into place using mobile cranes operating on the shorelines.

The spans four main girders, positioned at 5.5m centres, continuously vary in depth from approximately 1.5m at the abutments to 3.6m over the navigational channel. A series of 900mm deep cross members at 3.5m longitudinal centres were fabricated in long lengths and then cut to the required length to suit Fairfield’s automated processes.

Plan bracing to the central seven spans, located between the two inner main girders, ensured temporary stability during the launch and acceptable aerodynamic behaviour of the completed deck.

Mr Smale, adds that using modern fabrication facilities the bridge was erected within programme and budget. “More then 11,000t of permanent and temporary steelwork went into the project.”

“In order to cope with the extremely challenging site conditions the project team had to ensure permanent works and bridge erection design programmes worked simultaneously and to an exact plan. Having solved these primary challenges, we came to a successful conclusion with a very pleasing finished structure.”