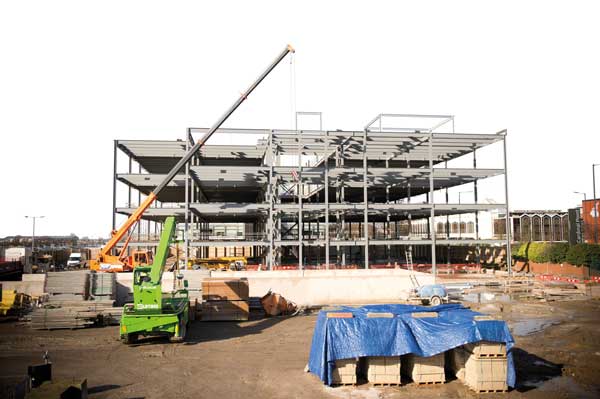 Steel offers the solution for the latest office block at the World Business Centre near Heathrow Airport.

Commenced in 1995, the WBC was designed to be implemented in phases; each of the buildings is virtually identical to give the impression of a continuous terrace.

The latest block (WBC4) has been designed to provide a contemporary take on the first three pavilions, including elements such as feature fins and solar glazing replacing the brise-soleil of the previous buildings.

Colour is used to give each building an identity without undermining the overall concept, with the central cores ranging from red in phase one to jade, ochre and navy blue.

The WBC is said to have pioneered the basic format for what has since become the British Airport Authority’s standard office product, for use at airports throughout the UK and in several other developments.

The first three steel-framed WBC blocks were constructed in phases between 1996 and 2001 and have flexible floorplates designed to be partitioned down to quarter floors offering suites from 270m².

Being built for the Arora Group, which also manages two of the older WBC blocks, the latest building is a four-storey structure, which will provide 7,900m² of CAT A office space and has been pre-let to airport technology group Amadeus.

Commenting on the project, Surinder Arora, Founder and Chairman of the Arora Group said: “With WBC4 we are building on our existing geographical advantage in the Heathrow area, and are delighted that Arora’s Grove Developments business is involved at this early stage of the project’s delivery as the group upholds its end-to-end development capability.

“It is still early days in this project, which is set to be the first stand-alone office building to be built in Heathrow since 2001.”

Explaining the logic behind the decision to use a steel-framed solution for the project, Shear Design Associate Darren Badham says: “Steel enabled the team to meet the required programme, this was achieved by fabricating the steel frame while the basement in-situ reinforced frame was being constructed, thus enabling the steel frame to be installed in a following sequence as soon as elements of the ground floor were sufficiently cured.”

The choice of steel also enabled the team to consider a value engineered approach to the foundations. All the adjacent WBC buildings were constructed on piled foundations and the original site investigation recommended a similar approach for this structure.

However, due to the teams’ experience of the area, having completed several buildings in the vicinity they believed a more cost-efficient raft solution was possible.

“Following further geotechnical assessment, we were able to achieve a raft foundation which can easily accommodate a four-storey steel-framed structure,” adds Mr Badham.

Following on behind the groundworks team, Apex Steelwork Structures’ erection programme was also dictated by the height constraints imposed by the adjacent airport. 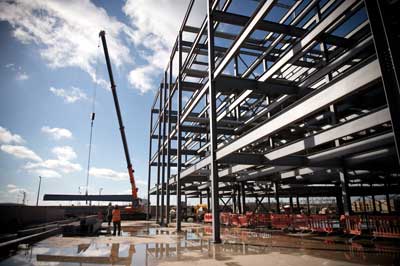 Installing a tower crane on this project was out of the question as no piece of equipment can be more than 30m-high on this site. Consequently, Apex had to carefully plan which type and size of crane would be best suited for this job.

“We used a 30t-capacity crawler crane and erected the structure one bay at a time, to the full height of the building,” explains Apex’s Project Director Peter Gillespie. “In this way, we kept the depth of the steel erection area to a minimum and consequently the height of the crane’s jib was kept to an allowed height.”

Due to the sequencing of the erection, and in order to help the follow-on trades, Apex also lifted the packs of metal decking into place once each bay of steelwork was up.

Constructed around a regular 9m × 7.5m grid pattern, the structural steel solution has allowed the team to meet the client’s requirements for a spacious and open office, with minimal impact from the structural frame.

Stability for the steel frame is derived from braced bays which are positioned within the two central cores, as well as diaphragm action of the floors.

Because of the building’s proximity to one of the busiest airports in the world, the consideration of how to demolish the structure was also an important consideration during the design stage.

Using steel proved to be the right choice as it can easily be dismantled when its lifespan is completed. “This is a great benefit with reference to its location, close to an airport, and the approvals that will be required,” says Mr Badham.

Summing up the project, RGB Group Construction Director Ian Thomas says: “We are pleased to be involved in the project for Grove Developments at WBC4. It is an exciting opportunity to be an integral part of the newest addition to the World Business Centre along with our Design Team partners Maith Design and Shear Design.

“The project represents a fantastic opportunity for RGB Group and we are pleased to be working in conjunction with our key supply chain members to deliver this stunning office. We hope to further develop our relationship with all parties involved and deliver on time and to the most ardent of standards.”

Aiming to achieve a BREEAM ‘Very Good’ rating, WBC4 is scheduled to complete by the end of this year.