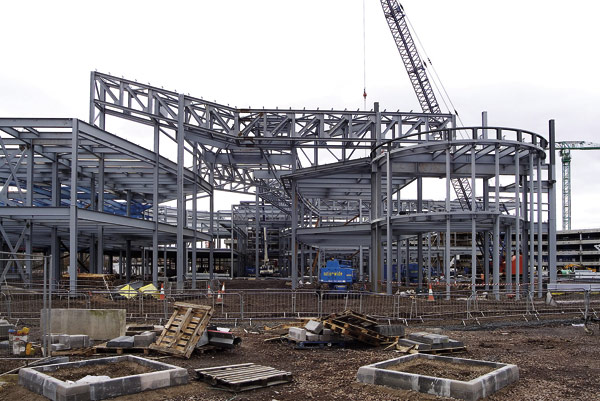 Severfield Reeve will supply more than 10,000t of steel for the construction of the £70M Silverburn shopping centre in Glasgow.

Working for main contractor Bovis Lend Lease, Severfield began steelwork erection in January for the 1 million m² project which is due for completion in late 2007.

Situated on the site of the former Pollok Shopping Centre and the South Pollok playing fields, the development consists of a braced steel framed building, split into independent areas along its 600m length, curved in plan and two-storeys high.

Joe Stuart, Director of Stuart McTaggart, the project’s structural engineers, said the centre will have a dynamic sculptured roof profile that will be illuminated at night, highlighting the roof shape and the supporting complex steelwork frame.

To provide environmentally friendly and cost efficient air conditioning, Stuart said a series of 6m-high ‘roof pods’ will run the length of the mall.

The pods will be supported off a series of long-span shallow depth steel trusses and Fabsec deep beams spanning the mall.