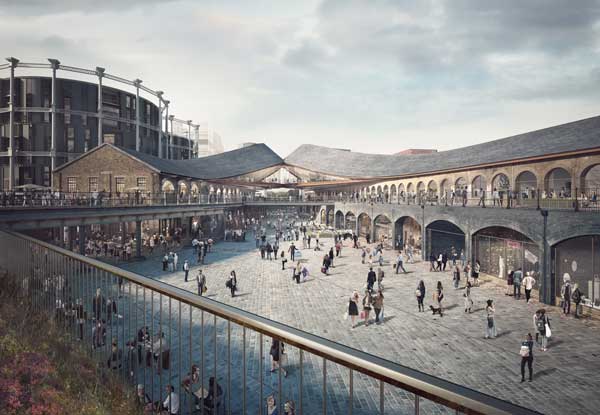 In the midst of a high-profile renovation project, a highly bespoke steel-framed roof structure will provide two restored buildings with a new crowning glory.

Located in the middle of this development is the Coal Drops Yard, which was built in the 1850s for receiving and sorting coal as it arrived from the north of England by train.

Consisting of two long brick and cast iron buildings, they each originally carried four high-level railway tracks from which wagons dropped coal into storage hoppers below. Horse drawn delivery carts, positioned at ground level, would then load up with the coal.

The Victorian structures were used as warehouses for most of the last century before being turned into workshops, studios and night clubs during the 1990s.

In the latest twist in the building’s story, the Coal Drops Yard is now being converted into what has been described as a world-class retail destination. The renovated brick arches will house a collection of shops, with a focus on fashion, craft and culture. 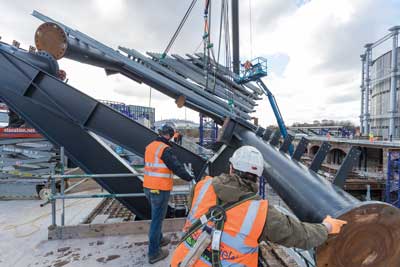 Eight individual and bespoke truss sections are lifted into place 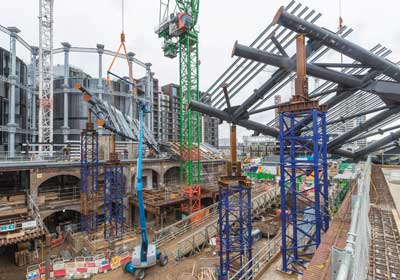 Each truss section is supported on temporary trestles 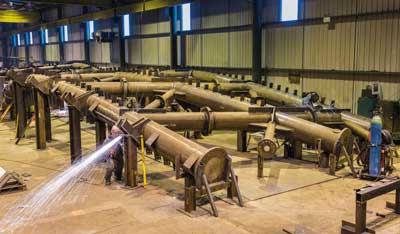 Fabrication of the trusses

There will also be places to eat and drink, while the wide open cobbled forecourt between the two buildings will be used as an outdoor performance space. Something akin to London’s Covent Garden is to be expected of the completed scheme.

Main contractor BAM is employing an array of different skills for this conversion project, from specialist restoration work of the brickwork and ironwork, to repairing the original timber roofs.

However, possibly the most challenging aspect of the project is the construction of a steel sculptured roof, which will straddle some of the area between the two original coal drop buildings.

The buildings, known as East Coal Drops and West Coal Drops, are approximately 150m and 120m-long respectively, and sit side-by-side while splaying outwards in a southerly direction. The roof structure is positioned towards the northern end, creating a feature element, where the gap between the structures narrows to about 30m-wide.

The trusses are fabricated from 610mm CHS members with 508mm CHS verticals and bracings made from 219mm CHS sections.

“The truss depths are maximised to be as deep as possible within the available roof void, and so range from about 7m in the middle to 5m close to the ends,” says Arup Engineer Stuart Chambers.

According to the design team, the curve of the ribbon trusses was heavily influenced by the architectural form of the roof, although it was rationalised where possible.

For example, each chord was rationalised onto a flat plane to make bending of chords easier, and there is a constant offset from the upper cladding surface to standardise, as much as possible, the cladding bracketry.

To form the segments, 20 individual components were brought to site by steelwork contractor Severfield, and then bolted together before being lifted into place by a 500t-capacity mobile crane.

In order to minimise the amount of working at height, Severfield also carried out paint touch-up and purlin installation on the ground.

A series of temporary trestles was installed to support the truss segments during the erection sequence. The trestles will remain in place until the roof structure and its supporting steelwork is complete.

Model highlighting the steelwork. The support steelwork is in red, the new floor and giraffe beams are in blue and the trusses are green.

This is supported on new steelwork at each end within the east and west buildings. The compression aspect of the system is made up of four fabricated box ‘giraffe girders’ (they look like giraffe necks in 2D elevation).

The tension is taken through a single tie (made of a series of plated steel elements), that is connected to the bases of the giraffe girders.

At the middle point of the roof, there is a large kink where the two sides nearly meet. This area has been dubbed the ‘kissing point.’

“As you can imagine, huge bending moments are generated in the steelwork here as the compression finds its way through. As such, there is a correspondingly huge, almost 100t, steel node positioned at this point,” adds Mr Chambers.

The ‘kissing point’ node, that resolves force through the kink at the centre of the roof is tapered from 900mm to 1,300mm deep at the centre, and has 80mm flanges.

“It may seem oversized, but its stiffness had a significant effect on overall roof deflections as it transfers the majority of roof load across the zone where the two halves of roof meet, and hence it had to be so big,” says Mr Chambers.

As Severfield Project Manager Dominic Charlton explains: “A new suspended floor is hung from the bottom chord of the ribbon trusses. It is constructed from tapered composite beams, with a 150mm slab over the top.  At one end the floor beams are supported on new structure within the footprint of the existing Coal Drops buildings.

“At the other end, it is supported by solid steel hangers.”

The steelwork programme for the Coal Drops Yard scheme is expected to be completed by August, and the new King’s Cross retail destination will open in October 2018. 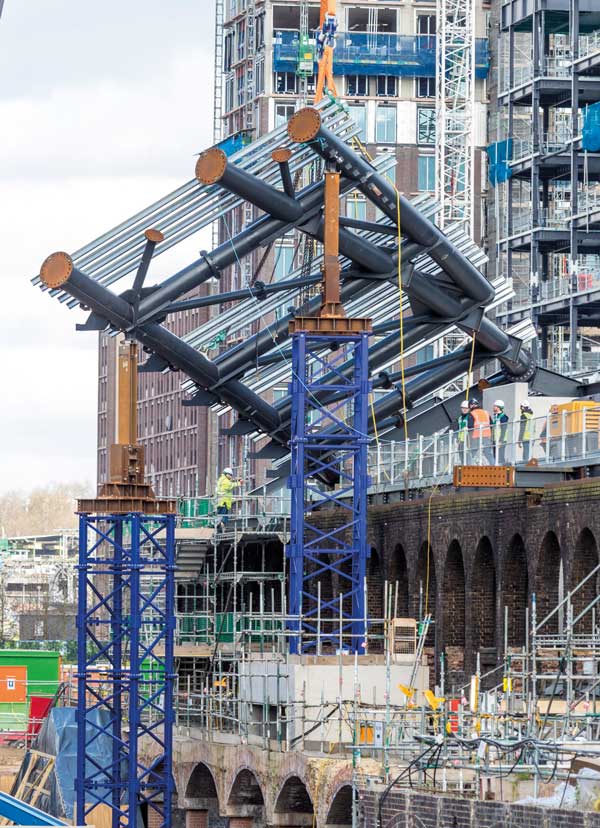