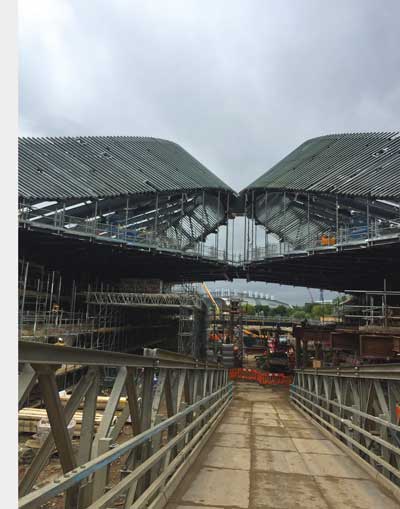 Severfield has completed the steel erection for the Coal Drops Yard retail destination, located in the heart of the Kings Cross redevelopment scheme.

The Coal Drops consist of two long brick and cast iron Victorian buildings, once used to carry four high-level railway tracks from which wagons dropped coal into storage hoppers below.

The buildings, known as East Coal Drops and West Coal Drops, are approximately 150m and 120m-long respectively, and sit side-by-side while splaying outwards in a southerly direction.

As part of the programme to convert these buildings into a world-class retail destination, a steel-framed roof structure has been erected between the two buildings at the northern end where the gap between the structures narrows to about 30m-wide.

The trusses were fabricated from 610mm CHS members with 508mm CHS verticals and bracings made from 219mm CHS sections.

The Coal Drops Yard is scheduled to open towards the end of 2018.