The redevelopment of London Bridge Station and the Macallan Distillery and Visitor Experience, both which made extensive use of structural steelwork, have made the shortlist for this year’s RIBA Stirling prize.

RIBA, the Royal Institute of British Architects, will announce the winner of highest accolade in October.

London Bridge  is one of the UK’s busiest railway stations and reopened last year following a £1 billion redevelopment programme. 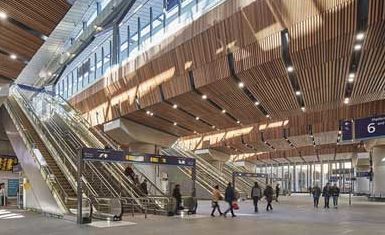 The Stirling Prize jury said its voluminous spaces and impressive new concourse had significantly improved the experience of those who use it daily.

Two major steelwork packages were undertaken on the project, one for the new bridge decks, which was awarded to Cleveland Bridge and another for platform canopies and associated areas, which was completed by Severfield.

The £140M redevelopment of the Macallan Distillery in Speyside, Scotland, has created a new facility with an undulating grass-covered roof.

The Stirling Prize jury said the distillery is futuristic, but also blends into the rolling hillside environment.