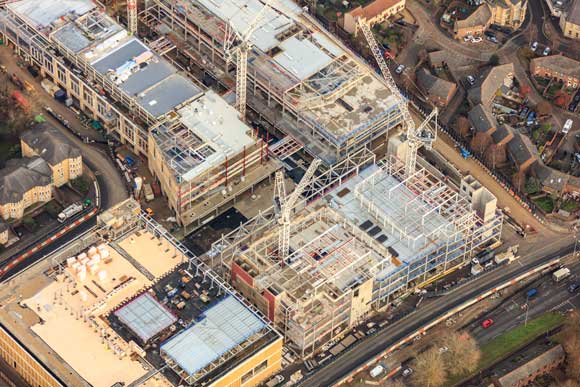 Main contractor Laing O’Rourke began work in January 2015, and its 30-month contract encompasses the construction of the new elements, which are predominantly sat atop a 1,000-space underground car park, as well as the extensive remodelling of the existing Westgate shopping centre.

This 1972-built reinforced concrete shopping mall has been partially demolished, leaving approximately three quarters of the three-storey structure to be integrated into the new scheme.

Fronting Bonn Square and Castle Street, this retained structure will provide one of the main entrances into the new Westgate and more than 1,000t of the project’s overall 7,000t steel tonnage has been used for the remodelling.

The rear portion of the structure, formerly occupied by C&A, was demolished, with the cut between what stayed and what went being made along an existing movement joint. 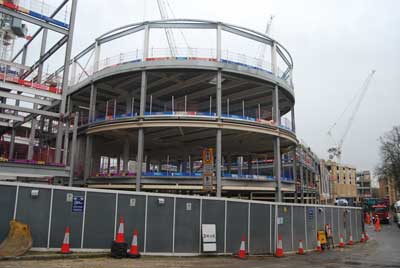 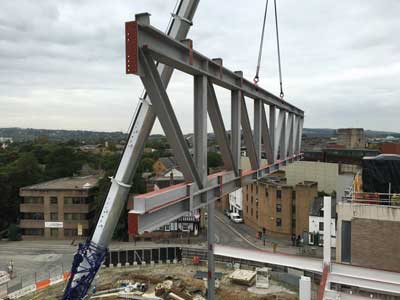 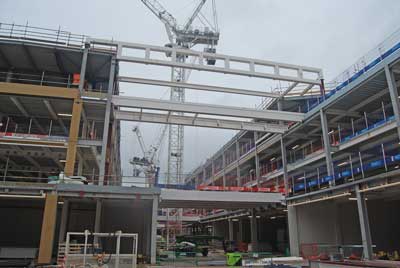 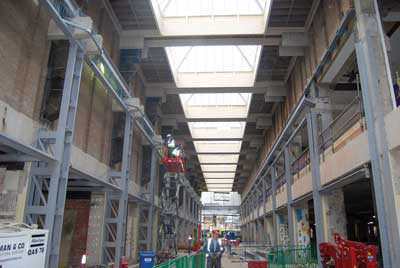 “A new entrance has been created, but most of the new steelwork within this building has been used to form new and more prominent shop fronts along the central pedestrian mall, as well as infilling areas that previously accommodated lift and stair cores and creating structural support around new tenants opening requirements,” explains Waterman Structures Project Director Karen Telling.

“Steelwork supporting metal decking is ideal for this kind of infilling work as it is quick and relatively easy to install in confined spaces.”

The remodelled and revamped mall will connect directly into the new covered shopping street, which, similarly to the older mall, will be spanned by a glazed roof.

To help the existing building fully integrate into the new scheme, it was cut back approximately to the structural movement joint line and a new steel-framed extension, comprising two independent bespoke buildings, has been connected onto the reinforced concrete frame to create a transition zone.

The steel extensions include a basement which will be used as a service yard. As delivery trucks need a large column-free space, three large steel trusses weighing up to 33t and measuring up to 25m-long have been installed.

BHC, the project’s steelwork contractor, has predominantly used the site’s tower cranes for its steel erection, but some of the larger and heavier elements, including the trusses, have necessitated the need for mobile cranes to be brought to site.

For the new build part of the scheme steelwork is playing a leading role in the construction programme.

Excluding the concrete-framed John Lewis store (known as block 1), the project includes three other steel-framed retail buildings: block 4 which is the remodelled building and its new extensions, Block 3 which is in fact two buildings sat either side of the shopping street and block 2 which is another three-storey retail building positioned at the 90 degrees to 3 and 4, and sat at the top of the street where it turns at right angles towards the John Lewis store.

A series of steel bridges links the blocks at second and third floor levels, with the longest of these structures spanning 22m across the main covered street.

The majority of the new build parts of the scheme are founded on a suspended concrete slab which sits atop of a two-level underground car park.

Prior to the steelwork starting on this area a large enabling works and excavation programme was undertaken by Laing O’Rourke.

“An archaeological dig was also undertaken and a number of interesting objects were discovered as there was once a priory on the site,” says Laing O’Rourke Project Director Chris Rafferty.

The new steel-framed retail blocks are predominantly erected around a 7.5m x 7.8m grid pattern, while below in the car park there is a larger 7.5m x 15.6m grid. As not every steel column has a subterranean member to sit on, a series of transfer beams is incorporated into the suspended slab.

Explaining why steel was chosen for the retail blocks, Ms Telling says: “The steel buildings offer flexibility as tenant requirements may change over time and columns can be removed to create larger stores. Steel was also chosen to minimise the overall structural weight.”

Each of the three-storey steel-framed retail blocks is an independent structure, gaining its stability from a combination of discreetly positioned concrete cores, bracing and moment frames.

All of the steel frames support a precast twin wall cladding system that has a brick exterior face. The concrete-framed John Lewis store also has the same cladding, which was chosen for its likeness to the existing Oxford city centre buildings.

As with many city centre projects, logistics is playing a key role on this job.

“There are numerous sub-contractors working on site simultaneously and so sequencing the programme and making sure the project’s eight tower cranes are used by everyone as efficiently as possible is vitally important,” sums up Mr Rafferty.