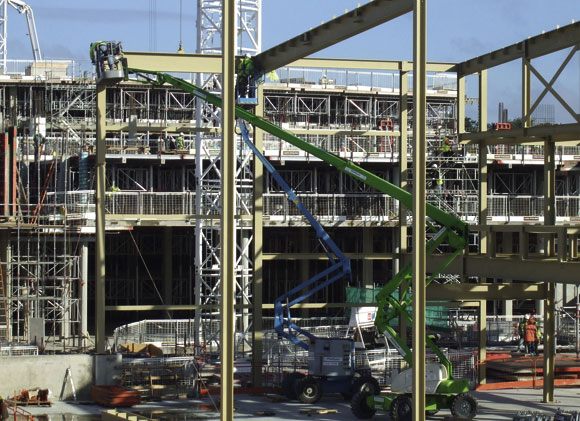 The three-storey steel frame of the retail block A under construction.

Steel and concrete each have their part to play in a major new retail, leisure and housing development in the South East, as Margo Cole reports

The Surrey town of Camberley is the latest to place its faith in retail and leisure development as a catalyst for regeneration. Crest Nicholson Regeneration and Standard Life Investments are spending £130M on a large mixed use development, called The Atrium, which is currently emerging from a former car park on the edge of the existing shopping area. 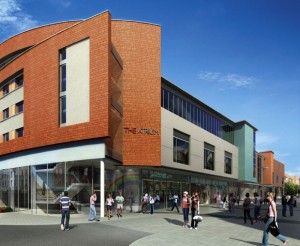 The Atrium will transform the centre of Camberley.

The Atrium has been designed to attract major retailers by offering them larger units than have previously been available in the town. These retail units are built in two blocks on the east side of the development. Between them is the entrance to the open space that gives the development its name and acts as the entrance to leisure facilities, including a nine-screen cinema, bowling alley, gym, cafes and restaurants, with parking for 683 cars.

Also associated with the 23,000m2 development are 217 apartments, 55 of which are for shared ownership. The apartments are being built in three areas: a terrace, known as Centro, The Courtyard and a corner block called Aspect.

All the different elements of the project are being constructed as separate buildings, with all the apartments and most of the leisure facilities built in concrete frame construction. However the two large retail areas (blocks A and B) are steel framed, as is the cinema, which sits on a slab 6m above ground.

In addition, all the apartment blocks have steel framed roofs, and there is a roof structure linking the cinema to the bowling centre that is formed from curved tubular steel ribs spanning between the two, supporting ETFE “pillows”.

Billington Structures is responsible for fabricating and erecting the steelwork – a total of 2,000t. The firm has been on site since April, and hopes to have the bulk of the erection complete by Christmas. Already finished are the terraced apartment block (Centro), the two frames for Blocks A and B, and the southern section of the courtyard development. 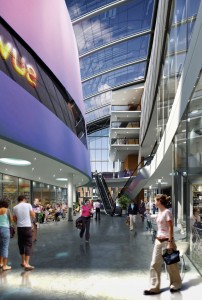 Curved tubular beams will support an ETFE roof over the space linking the leisure facilities.

The entire project is due to be completed by October 2008, although phased handovers will see the first retail units handed over for fit out before Christmas this year. The terrace block (Centro) has already been completed, and residents have started to move in.

The two retail blocks – each 16m high and containing 500t of steel – have been designed as composite steel frame structures, with the main beams designed to act compositely with the concrete floors. Some frames are braced, while others act as sway frames.

“Bracing is not always possible because of the restrictions created by the glazed shopfronts and requirements for future flexibility,” explains Paul Jarvis, Associate with structural engineer Thomasons.

Most of the steel in these two structures is of fairly standard sections. However, there is one large transfer structure at the south end of block A that spans across a goods entrance to give delivery vehicles access to the back of the retail units. Billington fabricated a 4.5m deep x 21m long girder truss for this transfer structure and lifted it into position during the summer.

“We used mobile cranes for most of the steel on blocks A and B and for the courtyard and terrace roofs,” explains Steve Worner, Billington’s Project Manager. “But we’re using the tower cranes for the cinema and atrium.

“We did look at using mobile cranes because of the possibility of tower cranes not being available,  and even thought of bringing in mobile tower cranes, but so far it’s been fine.” Erection of the cinema steelwork started in September. This frame springs from the first floor over the retail units, and will eventually house nine screens and associated facilities. 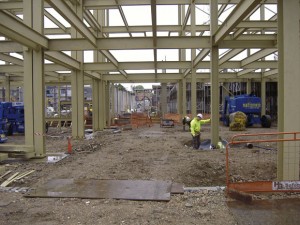 “It’s not a very straightforward structure, because it’s not a particularly regular grid and columns need to be positioned very carefully to coordinate with the cinema layout,” explains Mr Jarvis. “The frame also has very high storey heights to accommodate the auditoria.”

Billington has fabricated and erected the main columns for the frame of the cinema as single pieces that run the full height. What is particularly noticeable about them when they are in situ is how slender they are at just 254 x 254 section size.

“Column sizes were restricted to fit within the stud walls of the auditoria,” says Mr Jarvis. “The acoustic requirements for the cinema are very stringent both from the point of view of sound being transmitted from one auditorium to another and for sound exiting the building. The architect has designed double independent stud walls with acoustic infill, and our columns have to fit inside these walls, so we’ve gone for smaller but weightier sections.”

Inside the frame the auditorium spaces are large and open, but steelwork is also being installed to carry projection rooms and plant rooms on two different levels. Billington must also fabricate the main support structures for the auditorium seating, in the form of raking beams onto which tiered steel “staircase” support brackets are welded.

The main contractor has yet to decide whether to use in situ or precast concrete for the terraced seating, but the staircases can either be used as permanent formwork or as a base for precast units. 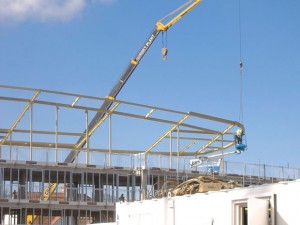 The distinct curved roof of the terraced apartment block.

This is one of the areas that Billington will return to after Christmas, once the roof and cladding have been fixed to make the cinema watertight. The roof has a dramatic curved wave form shape, with the curve achieved through the use of large girders (weighing up to 6t) supporting purlins set at different levels.

“There was not much scope for design changes on the project, but we did have some input at the tender stage,” recalls Mr Worner. “We gave a few options for the roof of the cinema, and this combination of big deep beams with the curve achieved by stooling the purlins at different heights was the one they went for.”

The cinema frame requires 575t of steel, and the atrium roof structure a further 100t, half of which is in tubular sections.

These are being fabricated at Billington’s facility in Yate, near Bristol, as are all the standard sections for the cinema. Steel for blocks A and B came from its other works near Barnsley.

Deliveries come to site every other day, with each load lifted directly into position on the frame. Billington has used one erection gang throughout the job, and has managed to maintain continuity since starting on site.