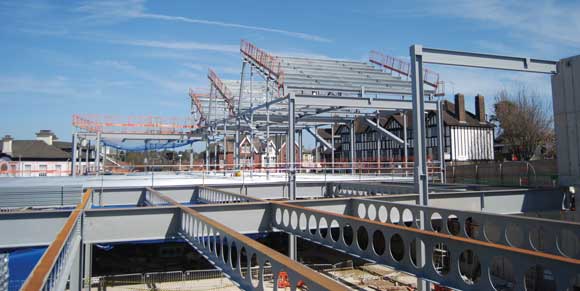 The construction of a Waitrose superstore and accompanying car park represents the largest element of the £35M Haywards Heath station upgrade.

Solum Regeneration, a partnership between Network Rail and Kier, working closely with Southern Rail, and Waitrose, have all combined on this £35M scheme.

Ultimately, the overall Station Quarter development will deliver an integrated transport hub; a four-level multi-storey car park (see box); an enclosed footbridge linking the car park and the station platforms; an enhanced public realm around the station, and a Waitrose superstore with its own dedicated parking.

BAM Construction is the main contractor for the steel-framed Waitrose part of the development and it started on site during April last year. The plot of land adjacent to Haywards Heath station was formerly occupied by a bus transfer station and a large surface car park for rail passengers.

“We had to liaise with the team constructing the multi-storey car park, because until it was open we had to keep a portion of the existing car park open and consequently couldn’t take possession of the entire site,” explains BAM Construction Project Manager Alan Newland.

BAM started by levelling part of the sloping site in preparation for the steel frame of the Waitrose store and car park to be erected. This involved the removal of some 19,000m³ of overburden, which required a total of 2,500 truck movements.

The steel-framed Waitrose store consists of a lower level 2,300m² store and café that is dug into the previous slope and is partially subterranean along one elevation. An upper level accommodates back-of-house and storage facilities, and car parking for 60 vehicles.

Taking in the sloping topography, the upper level car parking area of the steel frame then joins a ground level surface parking lot.

The upper car park deck comprises a 165mm deep composite slab, primarily supported on a series of cellular beams. These beams are up to a maximum depth of 761mm, and are supported by a series of 914mm deep UB sections.

The lower level of the steel structure accommodates the Waitrose sales area and column intrusions had to be kept to a minimum in this area, according to BAM Design structural engineering team member Kangaichelian Sirijeyanantham.

“As well as the required long span qualities a steel frame gave us, the other reasons the design team went with this form of framing solution is that it is more economical and faster.”

Other advantages the project team has gained from the design are that cellular beams throughout the steel frame have allowed building services to be accommodated within the beam depth, while at ground floor, in addition to carrying the vertical loads, the floor system also acts as a diaphragm to transfer lateral forces from the perimeter retaining walls.

Also sitting on the upper level and atop one of the main store elevations is a back-of-house area that includes a loading bay, storage facilities and offices.

The superstructure of this area comprises a two-storey steel frame topped by a saw tooth profile roof formed by a series of high-level trusses.

Also on the upper level the steel frame includes a lobby structure housing a travellator and passenger lifts that connects the car park with the sales floor below.

This small structure is stabilised by a moment frame together with the concrete core walls that form the adjacent lift shafts. Meanwhile the majority of the steel structure gets its stability from vertical and horizontal cross bracings.

According to steelwork contractor Elland Steel Structures, steel erection was a challenge because of the site constraints.

Using a single 70t-capacity mobile crane for its entire steel programme, that also included the installation of metal decking, Elland Steel Structures erected the majority of the frame from outside of the structure’s footprint.

“As we had to erect the sales area first, which is below ground level in parts, it was easier to stand the crane just outside of the footprint,” explains Elland Steel Structures Commercial Director Jeremy Shorrocks.

“The only exception to this was the initial part of the erection process which involved installing the steelwork furthest from our preferred crane position.”

For this part of the work, a temporary ramp was installed to allow the crane access to the sales area.
Elland completed the steel programme in May and the Waitrose store is due to be completed in October. 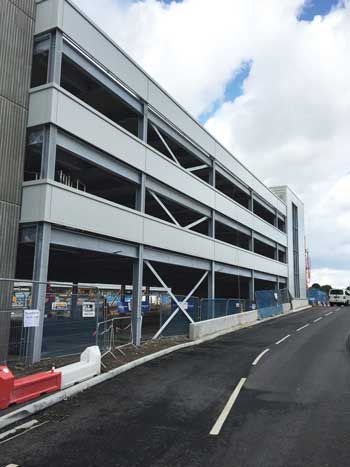 Built by Bourne Parking [part of Bourne Construction Engineering] acting as both main contractor and steelwork contractor, the station’s new multi-storey car park opened earlier this year. It is operated by Indigo Park Solutions on behalf of Southern Railway.

The structure acted as a catalyst for the Waitrose part of the development as once it was open the adjoining surface car park could be closed and the construction of the superstore begin.

Built around a 16m x 7.2m grid, the structure required 960t of steelwork. The braced frame was erected around three concrete cores and it supports pre-cast concrete flooring planks.

“Logistics was the biggest challenge on this project as we had to work adjacent to an existing car park and busy railway lines,” says Bourne Parking Project Manager Kevin Clarke.

“We had to ensure our cranes didn’t overslew the adjacent car park and railway and we had to erect the steel frame in a sequence which ensured, in the event of an accident, it couldn’t fall on to the rail tracks.

This was done by erecting the sections of the car park furthest from the rail lines first, and once we had a stable structure the last bays along the Network Rail boundary were bolted onto this braced frame.”