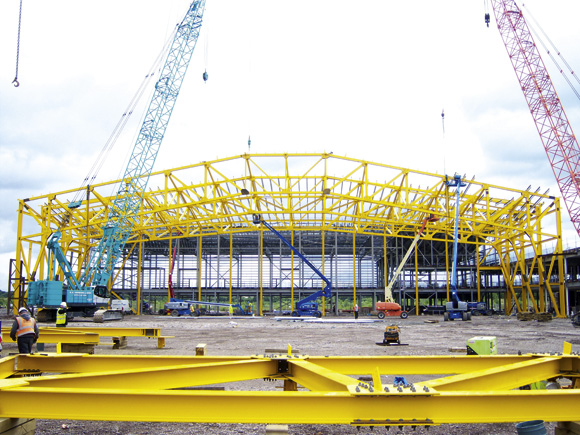 The former home of Scottish steel making is being transformed into the UK’s first new town for more than 40 years. Martin Cooper reports on one of the first projects to get under way, an iconic steel framed sports centre.

On the site where thousands of people once worked on the production steel, today a new town and community is springing up with steel again playing a pivotal role.

Known as Ravenscraig, this was previously home to Western Europe’s largest hot strip steel mill and the closure of the steelworks in 1993 signalled the end of large scale steel production in Scotland.

Located on the outskirts of Motherwell, North Lanarkshire, the site covers an area of 4.5km² and has been described as one of the largest regeneration projects in Europe. A new town and community is planned which will include more than 3,000 homes, a new town centre with 84,000m² of retail and leisure space, up to 216,000m² of business and industrial space and a new transport network.

So far one major project, a new home for Motherwell College, has been completed, while a second, the Ravenscraig Regional Sports Facility, is rapidly taking shape. Bearing in mind the history of the locality, it is fitting that both of these projects have been built using structural steelwork. 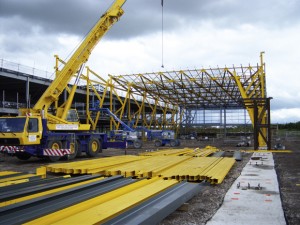 Using the spine building for temporary stability, trusses are erected to form the athletics hall

Construction Work on the indoor sports centre began in early 2009 and it is progressing towards a 2010 completion date. One of the primary aims for the facility is that it will be a key training ground for Scottish sportsmen bidding to take part in the London 2012 Olympics and Glasgow’s Commonwealth Games two years later.

The Ravenscraig Regional Sports Facility will be one of the largest in the UK and will include an indoor artificial football pitch, a sports hall, gymnasium, an athletics hall, as well as outdoor football pitches.

Housing all of these disparate indoor sports and pursuits required a unique and bold structure. Project architect Populous came up with a design which consists of three separate structures all interlinked around a fourth central spine building which houses changing rooms, offices, a cafe and the centre’s main entrance.

The design uses sloping profiled cladding, which wraps around the roof in segments defined by a stepped roof profile. “Achieving the desired profile and cladding aesthetics presented challenges for the structural design,” says Jeremy Morris, Structural Engineer for Buro Happold. “We worked closely with the architect, cladding subcontractor and steelwork contractor to develop the most economic solution. The cladding sheets are fixed on the skew to give the sloping appearance, the primary steelwork is located and sized for maximum efficiency, and the secondary steelwork is built out to form the cladding profiles.” 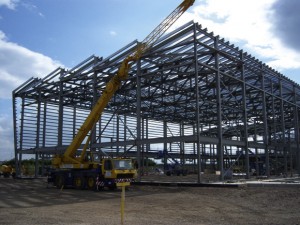 The frame for the sports hall and gymnasium takes shape

The other three buildings are all portal frame structures with longitudinal bracing which abut the central ‘spine’.

“We then began erecting the athletics hall,” explains Jaime Greenock, Project Manager for Bone Steel. “This involved a series of 24m-long trusses which were brought to site in two pieces, bolted together and then lifted into place as one 3t section.”

The form of the athletics hall was dictated by the events which it will house. The length of the building had to accommodate six 135m-long straight sprint tracks, while accommodating the pole vault meant one end of the hall’s roof had to slope upwards to give extra clearance within the building.

The sequence of steel erection next progressed to the sports hall and gymnasium building which abuts the ‘spine’ along its southern elevation. This building will house nine badminton courts, pull-out seating for 450 people as well as the facility’s plant room which is accommodated along one elevation on a raised mezzanine floor.

This structure is a braced framed building with a clear span roof formed with a series of 28m-long trusses. These were fabricated in two sections which were bolted together on site and then lifted into position as one piece by mobile crane.

The steel erection sequence left the largest structure and the pièce de résistance of the entire project – the hall containing the full size artificial football pitch – to last. Measuring 105m long x 72m wide and 18m high at its centre, the roof is formed with steel trusses made from rolled column and angle sections. “This gives the structure an economical roof with bolted connections for easy on site assembly,” says Mr Morris.

Erecting such a large structure with clear spans of 72m presented the project team with a number of logistical challenges, all associated with the erection and assembly. 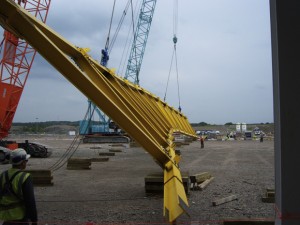 The roof of the football hall incorporates a striking serrated design which will allow natural light to enter the facility all year round – which is unusual for a building with such a large enclosed area. To form this roof design which arches up in the middle and then slopes down to either end, meant all of the roof trusses are unique varying in profile from flat to arched.

“All of the trusses are different,” says Mr Greenock. “This made fabrication challenging as not even the two trusses at either end of the building are the same, because of the roof’s haunch and slopes.”

The football hall was temporarily braced to the adjacent sports hall and then erected in a sequential programme away from that building in a northerly direction. The trusses are supported on D-shaped columns which were designed to give the hall the required internal headroom. The columns were erected two at a time and then supported by temporary works while a truss was lifted into place and bolted to them.

More temporary works were needed during the lifting of the trusses as they are so long. Two 18m-long ‘strongbacks’, produced by Bone Steel from beam sections, had to clamped to each truss during the erection process in order to guarantee rigidity.

“Erecting as well as fabricating the football hall was a real challenge,” sums up Mr Greenock. “Each truss has a different profile and the middle sections, which form the haunch, are steep making the lift a little more difficult.”

As for the building’s outside appearance, all the main halls have profiled metal cladding on purlins, with clear polycarbonate used for the northlights and the north elevations. The metallic exterior of the sports centre reflects the steelwork inside and will also serve as a lasting legacy on a site where steel is still playing a significant role. 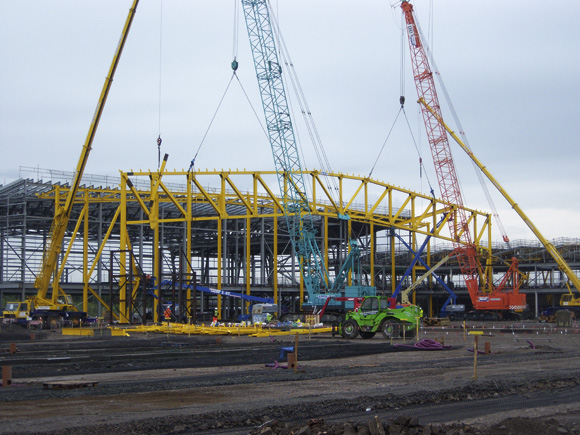 “Each truss and its two supporting columns for the football hall were erected in a three day sequence,” explains Mr Greenock. “Once the initial columns were up we lifted the truss into place and braced back using hot rolled ties during the first day, then on day two we in-filled the balance of all the hot rolled steelwork, and on the third day we did all the cold rolled and erected the next two columns ready for the sequence to start again.”

The sets of columns were generally released from the temporary works as the erection programme advanced and the bracing had been added. “We continually re-used about 30t of temporary steelwork on this part of the project,” explains Mr Greenock.

Each of the bespoke trusses were delivered to site piecemeal and then assembled on site. Once assembled the 72m-long x 5m deep trusses weighed close to 45t each.