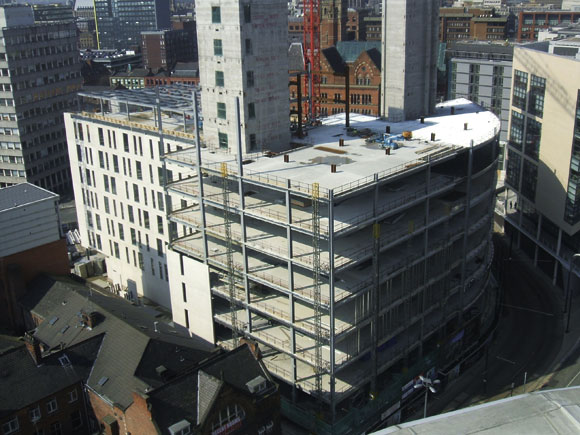 One of Manchester’s largest ever city centre developments is benefiting from a steelwork contractor’s rationalised supply and forward planning.

Once complete, the eye-catching Piccadilly Place development will be a landmark scheme as well as the first view many visitors to Manchester will get when leaving the main railway station.

Situated directly opposite Piccadilly Station and linked to the terminus by a new footbridge, the overall project has two phases. The first, consisting of a hotel and office block has now been completed, with phase two under way and scheduled for completion in 2009.

This latter phase will see three towers – known as 3, 4 and 5 Piccadilly Place – constructed on top of a three level concrete car park. Work on number 5, which is a 10-storey residential tower has just started and number 4, an eight storey commercial tower will start shortly.

However, 3 Piccadilly Place, a steel-framed 12-storey office development will be the first part of this sector to be completed. It is currently being erected by Rowen Structures and steelwork is scheduled for completion in June.

The structure is stepped, with one area rising to 12 levels and the other segment having seven floors. Overall the building will offer 20,000m² of floorspace.

This is the tallest of the three buildings and its height is one of the reasons why it is being built with steel.

Robert Harmston, Project Director for Tier Consult, explains: “The concrete car park has been designed to accept three structures, but in order to keep the loads down and therefore the basement columns manageable it was decided that the highest building would be steel-framed.”

During construction of the car park holding down bolts were cast into the tops of the concrete columns to accept the structural steelwork and aid the erection programme. 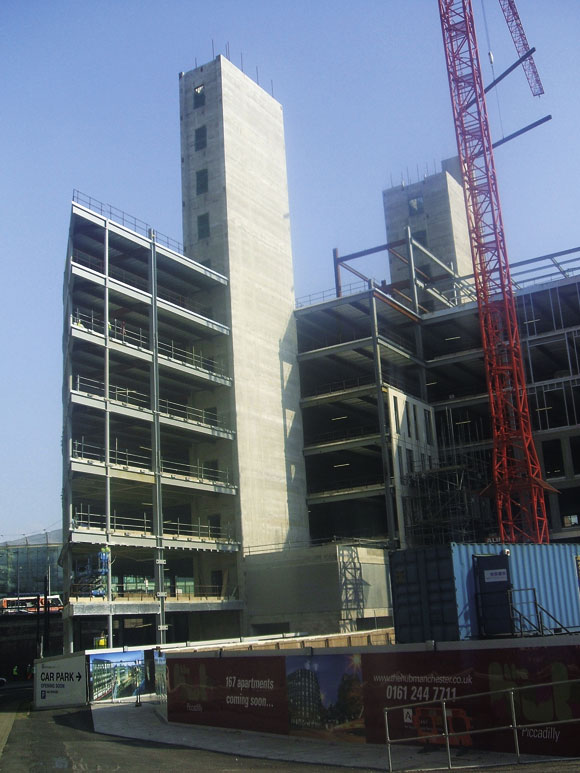 One complete floor is erected every four weeks 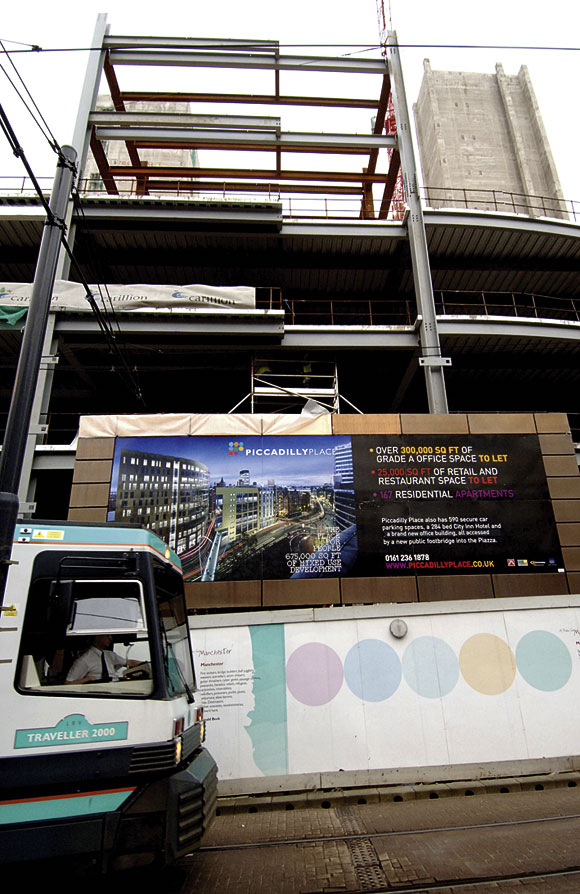 Carillion Project Manager Eugene McQuaid, says steel was also chosen because of the need for long spans and its speed of construction.

For the steel-framed building’s overall stability three concrete cores are of utmost importance. “They provide the structure’s permanent stability, consequently there is very little horizontal bracing, except for a little in the roof top plant areas,” adds Mr McQuaid.

The car park and concrete cores were complete by the time Rowen began steel erection in November 2006.

“The car park underneath dictates the grid pattern for the upper levels,” says Andrew Henstock, Contract Manager for Rowen Structures. “And it’s quite an irregular pattern.”

In order to maximise their time on-site and make the programme as cost effective as possible, Rowen’s involvement in the project also began well before steel erection started.

As well as designing the steel frame, the company also specified a series of plates to be embedded into the concrete cores. Once the cores were cast the plates had fins welded onto them and these connected to the structural beams.

There are a lot of steel connections to concrete, and once the cores were finished a survey was conducted to make sure all the embedded plates were in their correct positions and able to accept floor beams.

David Shipley, Rowen’s Project Designer, says: “This forward planning saved us a lot of time and work. The alternative would have been to drill bolts into the concrete which is very time consuming.

“We’ve used this method frequently over the past few years and it’s very effective, especially on multi-storey buildings as it gives an immediate fixing for the steelwork.”

A number of other considerations were taken on board at an early stage as Mr Henstock explains: “We wanted to use cherry pickers, so the design was developed to accommodate that and a fairly common loading has allowed us to rationalise the steel sizes.”

By rationalising the steel, deliveries to site have been simplified, as there is little room for setting down. The site is surrounded by roads and tram lines on two sides and steel has to be erected as it is delivered. Close cooperation with the concreting team didn’t end with the core structures. The whole erection programme involves a sequence of cooperation.

Mr McQuiad says each floor is completely erected, decked and has its concrete poured in a four week cycle.

“We’ve split the site into four sections, with the concreting following on behind the steel erection. When two phases have had their steelwork completed, the concrete slab is poured and when it has cured it is then ready for the cherrypickers to work on top of it to start the erection process all over again,” says Mr McQuiad.

In this sequence steel erection has progressed almost unhindered, except for some time lost during stoppages due to strong winds.

“Steel is a quick material to build with and we’ve got most of that time back now,” adds Mr McQuiad.

“Although the grid pattern changes it is constant right up through the structure,” says Henstock. “This helped with rationalising the steel.”

Structural beams are typically 305mm deep sections, although this changes to 500mm deep members on the second and fifth levels. “Stiffer support was needed to support the cladding,” explains Mr Henstock.

One area, however, did require two larger column sections than elsewhere on the project. Close to one of the cores and adjacent to a number of service voids two 356mm x 406mm columns were installed to take the extra loading.

The initial erection programme saw all columns installed in 13m lengths, taking in the first three levels and thereafter all sections were spliced at every other floor, which required 8m-long sections.

“There are also a lot of narrow service zones between the floors and to accommodate this we had to use some heavy but shallow columns as beams,” says Mr Harmston.

When steelwork is completed in June, fit-out will continue until the year’s end and the structure is expected to be finished in early 2008.