Project of the Year: The Leadenhall Building, London 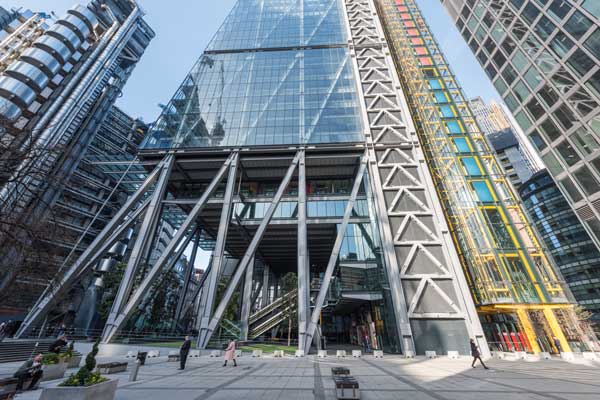 Reaching a height of 224m, the City of London’s landmark Leadenhall Building was designed as a wedge-shaped structure to minimise its impact on views of St Paul’s Cathedral.

Part of its unique design are the panoramic lifts which have been placed on the vertical north elevation, so they can serve all the office levels. As a result, there is no central core, and stability is provided by a perimeter braced steel mega-frame, placed outside of the building envelope.

“The use of steel is fundamental to the value of this building. It is visibly integrated into the architecture to an extent that is highly unusual for a skyscraper, creating a powerful tectonic quality which enables people to appreciate and take delight in the way that the building is constructed,” says Arup Director Nigel Annereau.

“Steel was chosen because of its high strength-to-weight ratio and tension capacity, making it the obvious choice for a tall braced structure. A concrete alternative would have been much bulkier, more complicated and slower to construct.

“Steel also offered the ability to create large column-free spaces both in the typical floors and at ground level. Transparency was maximised by integrating the steelwork with the cladding.” 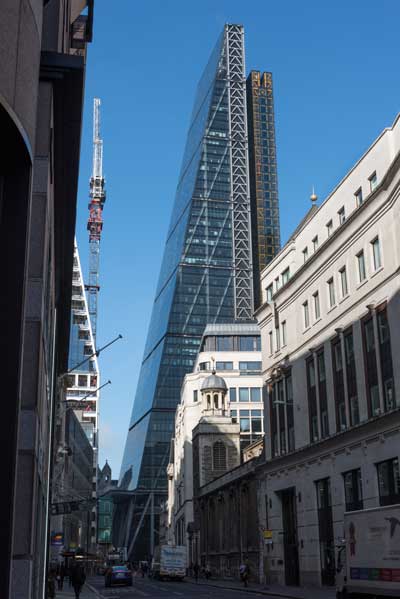 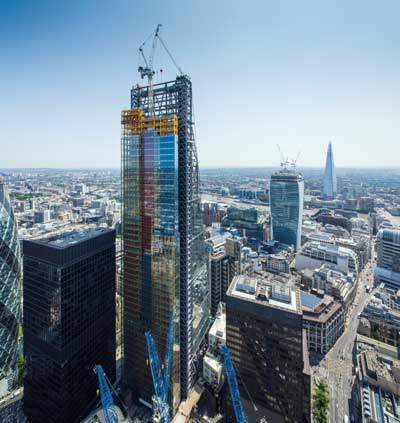 The steel design is said to allow the floors to be exceptionally open, with views in every direction and spans of up to 16m. There are no more than six internal columns within floor plates of up to 43m × 48m.

The architectural vision for the building was for it to express its engineering systems wherever possible. According to Arup, this significant challenge demanded a holistic and creative approach, with the engineers and architects working closely together from the outset.

The most striking example of this is in the mega-frame bracing system. It is formed with vertical columns, positioned where they are most needed, on the east, west and north faces, and a diagrid structure on the more lightly-loaded south face.

Connections are made through a family of separate fabricated node pieces. This ensures that the complex geometrical relationships between members are always resolved within welded joints and the site connections remain simple and standardised.

The shapes of the members are tailored to the requirements of the connections. A small number of large diameter pre-loaded studs are employed for strength and speed of construction.

At the bottom of the building, floors are cut away and hang from the levels above, forming a large open space known as the galleria.

Within this space, floor beams are exposed, enhancing the structure’s character.  At level five these beams project beyond the mega-frame to form a canopy over Leadenhall Street. The levels below are suspended via hangers whose bespoke end connections provide a seamless transition between the rods and the supporting steel beams.

The mega-frame columns and braces around the galleria are unrestrained over a height of 28m. Standard mega-frame sections have been subtly adapted, with tapering webs and additional stiffening plates, to significantly increase their buckling resistance without undermining the node connection principles or aesthetic proportions.

Steelwork is corrosion protected and fire protected where required. In wet external areas, epoxy intumescent coatings are employed for durability, and great care was taken to ensure a neat finish. Cast intumescent caps were placed over the ends of the mega-frame fasteners to preserve the ‘nuts and bolts’ aesthetic.

Main contractor Laing O’Rourke pushed for as much of the structure to be prefabricated as possible. Consequently, 80% of the building was constructed offsite, reducing waste and improving quality, safety and programme.

Explaining the project’s prefabrication ethos, Severfield Operations Director Alex Harper says: “The nodes were delivered to site as complete pieces and then bolted into place, this was made complex by the massive scale of the components and the bolts together with the difficult access. However, using large prefabricated pieces with bolted splices was a quick and efficient method.”

The primary steel system within the north core was built as a series of storey-high tables, with the services and concrete floor slabs pre-attached to them, minimising the number of crane lifts required.

The building was predicted to move sideways to the north during construction. An innovative approach was deployed to counter this, known as ‘active alignment’. The structure was initially erected straight, and movements regularly monitored. At a later point, adjustments were made to the mega-frame diagonals which pulled the building back sideways, reversing the gravity sway. This allowed the mega-frame nodes to be fabricated with a simple orthogonal geometry and improved the overall accuracy of construction.

Arup says that architecturally exposed steelwork is featured to a degree that is very rarely seen in office buildings. Systems are presented honestly and legibly, contributing to a public delight in the construction process. Through a collaborative spirit and an open-minded approach, the design team overcame significant technical challenges and met demanding aesthetic standards.

Summing up, the judges say this project had a committed client, architectural and engineering excellence, fabrication precision and construction ingenuity and innovation.  They all combined to make a project whose achievements are even greater than the sum of the parts.

Structural steel is rigorously controlled to generate an architecture that is clear and legible throughout the building. Like most ground-breaking projects there were lessons to be learned, but the client and the team persevered to achieve final success.

This world-class project is an exemplar for large commercial buildings.