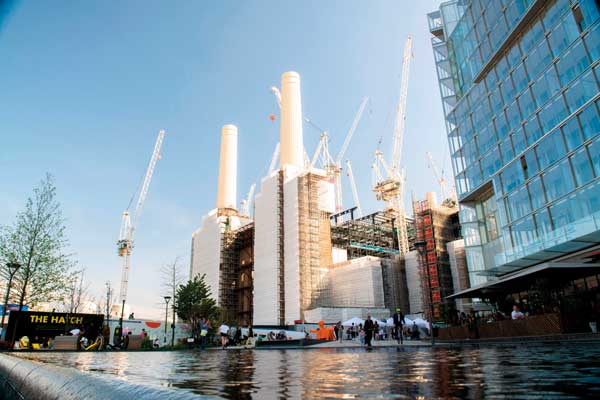 New steelwork construction and an extensive restoration programme are transforming Battersea Power Station into a huge multi-use destination, which will be the centrepiece of a much larger eight-phase development. Martin Cooper reports.

Completed in two phases either side of the Second World War, the massive Grade II listed power station once supplied around one fifth of London’s electricity needs, which required it to consume more than one million tonnes of coal annually.

With its output falling due to age, the power station was decommissioned in 1983 and unfortunately stood derelict for many years.

After a number of failed attempts to redevelop the site, the power station is now being transformed into a huge mixed-use scheme, which will sit in the middle of a seven-phase project that will convert the entire 42-acre plot into a new community.

Work on the former power station is known as phase two, and not only consists of the redevelopment of this iconic building, but also includes the construction of an energy centre – which will supply power to the entire scheme – and the creation of a six-acre public riverside park.

BPSDC Project Director of Phase 2 Jason Cowell says: “Battersea Power Station and the surrounding area is undergoing a major transformation that will see the creation of a new neighbourhood, which is set to become one of the most exciting places to live, work and visit in London. 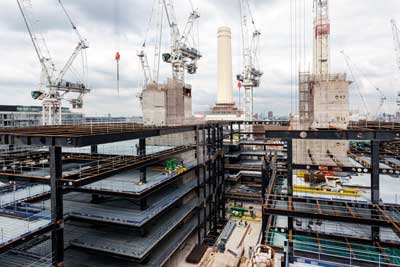 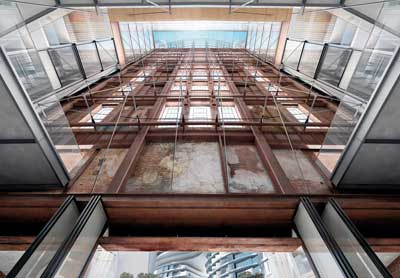 Retained steelwork will be visible within the retail atrium 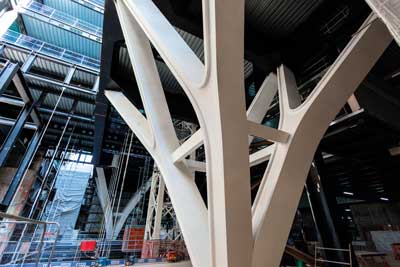 “The trees are working incredibly hard as they each pick-up six column lines from the commercial zone above and transfer them into a single column, allowing the main entrance below to be column-free” 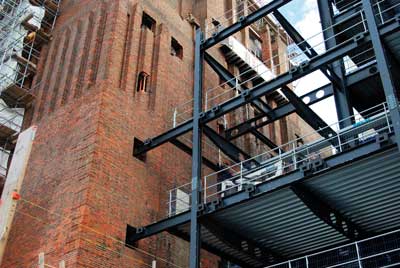 “Regenerating a Grade II listed building is not without its challenges. However, we are working closely with Historic England and Wandsworth Council, as well as construction, engineering and architectural experts including Mace, BuroHappold Engineering, WilkinsonEyre and William Hare to ensure the building is treated sensitively and with the respect it deserves.”

Phase one of the overall scheme was completed in 2017 and includes residential buildings that sit to the west of the power station. Phases three to seven are in various stages at present, but they will all add further residential, commercial and retail elements to the development.

Having initially had its four original chimneys rebuilt, the reconfigured power station building will include more than 100 shops, restaurants and cafes; a 2,000-person capacity events venue; a multi-screen cinema; six floors (46,000m²) of new office space, which will be home to Apple’s new London campus; and 253 apartments arranged around the uppermost levels.

Early works also included the excavation of a two-level basement that extends beyond the footprint of the existing structure. This subterranean area includes the underground box for the energy centre, which will sit beneath the area that will become the riverside park.

“This was a challenging engineering feat,” says BuroHappold Project Engineer Franck Robert. “We effectively dug a two to three storey basement around the entire perimeter of the Power Station, as well as deep basements under each Turbine Hall, which generated significant movements for the existing fabric and dictated when the new frame could be connected back to the existing.”

Above the basement, much of the building’s fabric has been retained, including the majority of its original steel frame and brickwork façades.

The building is divided up into a number of elements, consisting of a central boiler house, with a turbine hall, a switch room and annexes on both sides – east and west. Each of these elements are separated from the adjoining areas by internal walls, which have also been largely retained.

Within these retained elements, new steelwork forms the shops, restaurants, offices and apartments. Most of the floors are formed with steelwork supporting metal decking, with the only exception being a few areas on the eastern side where precast elements have been utilised for programme reasons.

Erecting these new steel elements was not a straightforward procedure as the entire programme had to be coordinated around a vast array of temporary works and bracings that had been installed to support the existing structure after a partial demolition programme had been completed.

The temporary works could only be removed once the new steel frames had been installed and connected to the retained walls, thereby providing the required support.

“One of the biggest challenges has been the integration of new steelwork elements and then connecting these to the original retained steel frames,” says Mace Project Manager Andrew Barrow.

“Unsurprisingly, a lot of the old steelwork, which dates from the 1930s and 40s was in a poor condition as a lot of water ingress had occurred since the building had been decommissioned. This meant a lot of work was needed to treat the corrosion and rust.”

The brickwork façades that the steelwork supports have also been restored, with some areas needing new bricks. This work required the project team to track down the original brick manufacturers.

“The bricks used to build the power station were imperial rather than the smaller metric sized ones which are more commonly used today. We have worked closely with the producer of the new bricks to ensure they complement the existing ones. Individual blends of brick have also been created to match the colour and texture of the original bricks used in the different phases of construction,” says Mr Cowell.

Time-consuming restoration work has also been carried out on the interior of the structure. Tiles that cover many of the inside walls have been cleaned and in some places replaced with new identical pieces.

The outer zones of the building, such as the turbine halls and switch rooms predominantly accommodate retail and residential floors. Within the retained walls of the two switch rooms for example there are three levels of retail outlets (ground, upper ground and first floor) and up to seven floors of residential. Three of these residential levels are new floors, protruding above the structure’s original brickwork façades.

Steelwork for the retail and residential parts has different column grid patterns, as the former requires larger column-free areas. This means there are a number of transfer structures located at level two, to support the increased number of columns in the residential levels.

The two turbine halls, which are approximately 150m-long x 25m-wide and 25m-high, will house three-level retail zones, topped and spanned by a series of trusses, which will support either glazing or roof gardens. The western turbine hall’s trusses date back to the 1930s-original build and have been retained, albeit with some strengthening works.

The eastern turbine hall was a later addition, built during the second stage of the power station’s construction in the 1950s. These trusses have been replaced with a new set to accommodate the increased roof garden loads.

All of the new steel frames are independent structures getting their stability from new concrete cores, which have also been installed within the original structure. However, many of the steel frames are inter-connected to their adjacent frames, via floors and bridges.

Some of the most interesting work and the project’s largest quantity of steelwork is in the centrally-positioned boiler house.

WilkinsonEyre’s Lead Architect Sebastien Ricard explains. “Sandwiched between the retail and commercial elements we have a large column-free events space and entrance foyer, while the building’s uppermost floors will accommodate apartments.”

The events space is positioned at second floor level, above the retail levels. Creating this large column-free space, which is a triple height space in some areas and double-height in others, are a series of transfer structures.

At the northern end of the boiler house, framing the entrance to the main retail zone and events space is a large 27m-long x 2.6m-deep plated girder weighing a massive 62t, which is positioned at the underside of the fifth floor. As well as helping to create the large open space below, it also transfers a load in excess of 2,000t down the building, while supporting eight floors above.

The beam, which is one of the largest single pieces of steel to be manufactured in the UK in recent times was brought to site in one section.

“The operation to transport the beam, lift and install it required detailed planning and close cooperation with our supply chain, local authorities and police. We also had to install one of Europe’s largest tower cranes for the job,” says Mr Barrow.

Working in conjunction with the large beam, and also helping to create the events space’s column-free interior are two feature 12m-high steel trees, that each support a 30m x 30m floor area.

Steelwork contractor William Hare delivered each of the two trees in three main elements, with a fully-welded base node weighing 48t being the first part. Four Y-shaped arms, each weighing 43t were then bolted to the node to form the main tree element, along with a further four infill arms, connecting up the main elements. Each tree has an overall steel tonnage of approximately 300t.

“The trees are working incredibly hard as they each pick-up six column lines from the commercial zone above and transfer them into a single column, allowing the main entrance below to be column-free,” adds Mr Ricard.

Above the events space and occupying the fifth to tenth floors of the boiler house are six floors of commercial space (Apple’s Campus) on top of which are two uppermost levels of residential apartments.

A further series of transfer structures are required at the underside of level 11, as the number of columns increase for the residential floors.

The phase two works are scheduled to open in 2021, coinciding with the opening of the new Northern Line underground extension, which will connect Battersea into the London tube network for the first time. 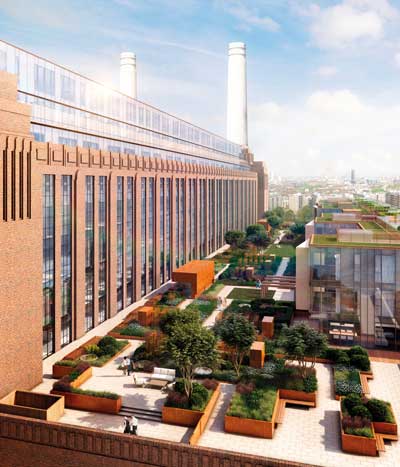 Richard Henderson of the SCI discusses some of the issues encountered at Battersea Power Station.

The external walls of Battersea Power Station are brickwork supported by structural steel framing and have been retained in the new structure. Dividing walls also separate the internal spaces and have been retained. External or internal temporary structures provide support for these retained walls and in some places have done so for many years. Permanent restraint must be provided by the new structures in the final state of the refurbished building. New concrete cores provide lateral support to new internal steelwork by which the retained walls are to be restrained.

In designing the connection of the new steelwork to the existing structure to provide the restraint, reliable geometric information is clearly fundamental. Also when making the connections, construction tolerances must be allowed for. The order of magnitude of these is indicated by the overall plumb tolerance of +/− 34 mm given in the NSSS1 for a six-storey structure 25 m high.

Relative movements must also be considered, such as:

Prediction and monitoring of the ground movements and of their effect on the retained structures are necessary. Provision for future relative movements must also be made to ensure that connections can be appropriately detailed. The movements can be accommodated by use of sliding or articulated connections to provide lateral support without attracting vertical load. Total axial shortening of columns can be expected to be 2 to 3 mm per storey, about two thirds of which is due to added dead load during fit-out and live load. Deflection of beams in the new structure relative to the retained external and dividing walls is clearly much greater².

Where the new floors do not directly abut the external wall, new structures in the form of horizontal cable trusses have been provided to restrain it. These elements provide support while maintaining the sense of openness.