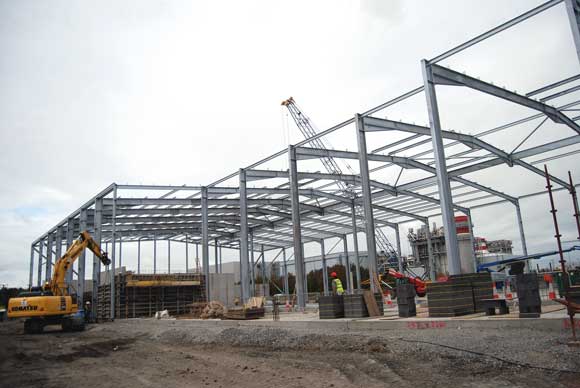 A steel-framed solution is a proven method for AD facilities

Ireland’s investment in green energy and waste solutions continues with the construction of a renewable bio-energy plant near Dublin.

The traditional reliance on fossil fuels is lessening, as green energy sources are now being increasingly harnessed. However, many experts state that the world still has a long way to go in order to meet targets set out at the Paris Climate Agreement.

The problem of waste is equally as challenging, because even with increased recycling, civilisation will always create some sort of waste that will need to be disposed of.

One solution to both of these challenges is anaerobic digestion (AD), which is recognised by the UK and Irish governments, Defra, the Welsh Assembly, the Scottish Parliament, Friends of the Earth and the National Farmers Union as one of the best methods for food waste recycling and dealing with farm waste and sewage sludge.

The biogas can then be used as a fuel in a CHP (combined heat and power) unit to generate renewable energy, such as electricity.

Interestingly the use of biogas is not new. It has been used in the UK since 1895, when gas from sewage was used in street lamps across the city of Exeter. 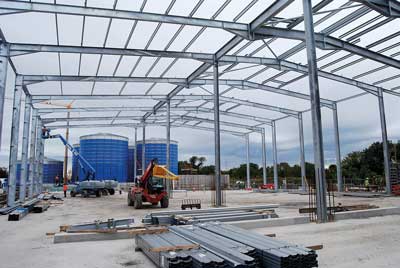 The structure is a propped portal frame 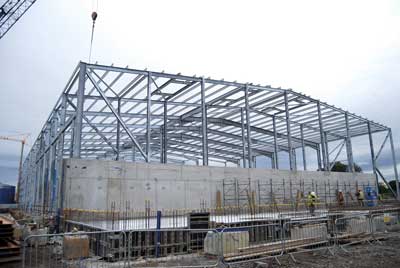 Various forms of stability are used including the structural walls

Another benefit of AD is that whatever is left over from the process is a nutrient rich bio-fertiliser which can be pasteurised to kill any pathogens and then stored in large covered tanks ready to be applied twice a year on farmland in place of fossil fuel derived fertilisers.

It has been estimated that every tonne of food waste recycled by anaerobic digestion as an alternative to landfill prevents between 0.5t and 1t of CO2 entering the atmosphere.

There are currently more than 100 AD plants in the UK at present and more than 14 in the Republic of Ireland. The number is expected to grow in the coming years and one that is due to come into operation next year is at Huntstown on the outskirts of Dublin.

This plant is located adjacent to the Huntstown Power Station and, once operational, it will generate up to 3.8MW of electricity to supply 7,500 homes from 90,000t of food waste per annum.

The main processing area for any AD facility is usually housed within one large structure and at Huntstown this structure measures 90m-long × 43m-wide.

This steel-framed building will house the waste disposal/reception area and pre-treatment zones, where the product is sorted prior to being pumped into the facility’s six primary digestion tanks where the bio-fuel is created.

“We’ve been involved in a number of AD plants and they’ve all had a steel-framed pre-processing treatment building,” says DBFL Director Colm Doyle.

“Steel is the ideal material to form these structures as they are always long span structures.”

DBFL are the project’s structural engineer and worked on the initial design for the main building. County Wexford-based steelwork contractor Fox Bros. Engineering were then subsequently contracted to the scheme on a design and build basis.

“This is the third AD plant we have done and they are all similar open-plan structures,” explains Fox Bros. Director John O’Hara. “Once we were brought on board we value engineered the steel frame to make it as cost-efficient as possible.”

Supported on pad foundations, the Huntstown facility’s building is an asymmetric propped portal frame, with its centre line of columns located slightly off centre, in order to accommodate the internal equipment layout.

As well as having portalised bays for stability, the frame also makes use of bracing located in the gable ends. In these areas, the steel frame is founded on concrete walls, and uses their rigidity to add further stability to the overall frame.

The majority of the central spine columns are arranged in a hit and miss configuration, whereby only every other bay features a column. Consequently, some roof rafters span the entire 43m width unsupported, while others span 18m and 25m, either side of the off centre spine column.

Fox Bros. had to bring the roof rafters to site in three pieces, which were then assembled on site before being lifted into place in one piece.

All of the project’s steelwork has been galvanized to protect it against the highly-corrosive atmosphere that arises inside an AD facility. No steel member on this project is longer than 16m, because the beams and columns all needed to fit into the galvanizing contractor’s tank.

The structure also incorporates an internal two-storey office which is situated along one main elevation. Measuring approximately 50m-long × 18m-wide, its internal partition, separating it from the reception part, is formed by the off centre spine columns.

The Huntstown AD facility is due to be operational by late 2019.