Plans revealed for joint rugby and football stadium in Workington 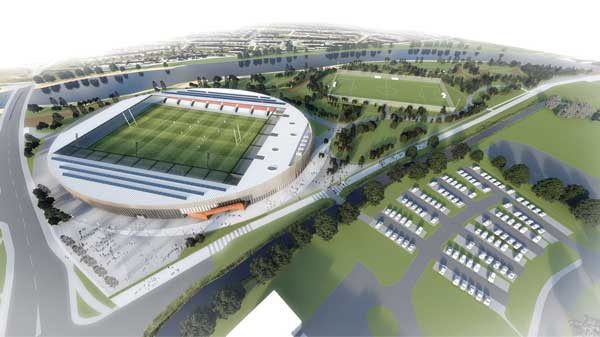 Ambitious plans for a new community stadium and sports development in Workington have been released by Allerdale Borough Council.

The planned 8,000-capacity stadium would be a new home for both Workington Town rugby league club and Workington football club. The development would also include a full-size synthetic pitch for community use.

According to the council, both the rugby and football club have been working with the local authority and jointly approached it to see if they could develop first-rate shared facilities, which would benefit the clubs, players, and supporters.

With shared costs and new, modern and more efficient facilities, the new steel-framed stadium would make the clubs more sustainable and encourage a bigger fanbase.

To meet the playing demands of both clubs, the pitch will exploit the latest hybrid technology using both plastic and real grass. Pitches like this are successfully in use in shared facilities elsewhere. Many of the premiership clubs use this pitch technology and it appeared at the recent World Cup in Russia.

The plans have been drawn up by architects Holmes Miller and the council is currently putting together a funding package which could include grants, sponsorship and money from partner organisations so that the impact on the council taxpayer can be kept to a minimum.

It is hoped that the stadium will be completed by Spring 2021, in time to host three games for that year’s Rugby League World Cup.