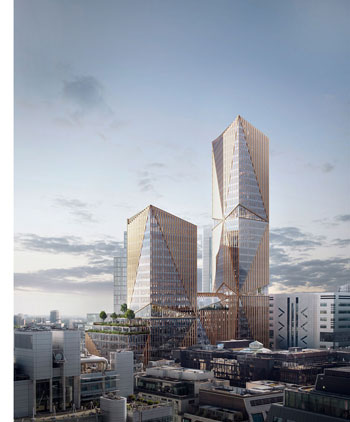 British Land has revealed new plans for 2 Finsbury Avenue at Broadgate in the City of London, said to be the largest pedestrianised neighbourhood in the centre of the capital, ahead of a planning submission in the Autumn.

The building is being designed by Danish-based 3XN in partnership with the innovation unit, GXN. The project consists of a 12-storey podium with a 35-storey East Tower and 20-storey West Tower.

In line with British Land’s sustainability strategy, the building will target net zero carbon in construction and operation as well as a BREEAM ‘Outstanding’ rating. The company said, to achieve this ambitious goal, a series of forward-thinking environmental initiatives will be incorporated.

To ensure flexibility for current and future needs, the offices have been designed with behavioural scientists from GXN and are interspersed with healthy, green areas and terraces to inspire creative collaboration and social interaction.

Connecting to the existing neighbourhood is a central element of the design and a public route under the building will extend Finsbury Avenue to create a new route from Eldon Street to Sun Street via Finsbury Avenue Square.

Public access to the building will be delivered through the inclusion of a new learning hub fronting on to Sun Street and Wilson Street.