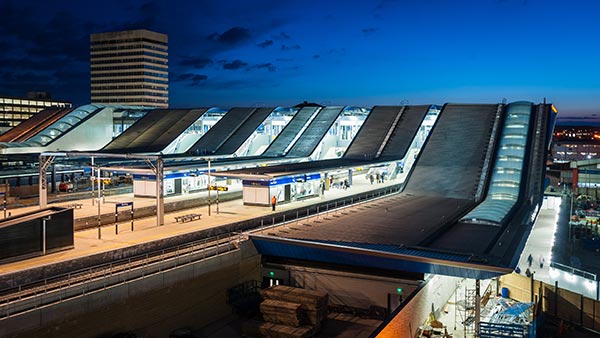 An important element of the work is a new steel footbridge, also known as the Transfer Deck, that has been built over the central portion of the station providing access to all of the platforms.

Because the structure is 100m-long and spans a functioning and busy railway station, it was constructed in three separate stages, adjacent to the northern entrance building.

The first section of the bridge to be erected measured 50m x 30m and consisted of 550t of steelwork. It was site assembled on piers and then pulled by strand jacks towards its final position adjacent to the Western Gateline building. This then made room for the second section to be assembled in the same location.

Slightly smaller at 24m long, the second section was connected to the first and the combined structure was then launched a further 18m to connect the Transfer Deck to the western gateline building.

This major reconstruction of a key hub on the rail network represented a considerable step for the client and its team. The deck structure itself presented challenges for construction above the operating rail lines, and steelwork was the appropriate material for the varied structural forms used.

The overall works at the station present a fairly dramatic environment for the travelling public.