Posted on October 7, 2020 by NSC in Commendation, Projects and Features 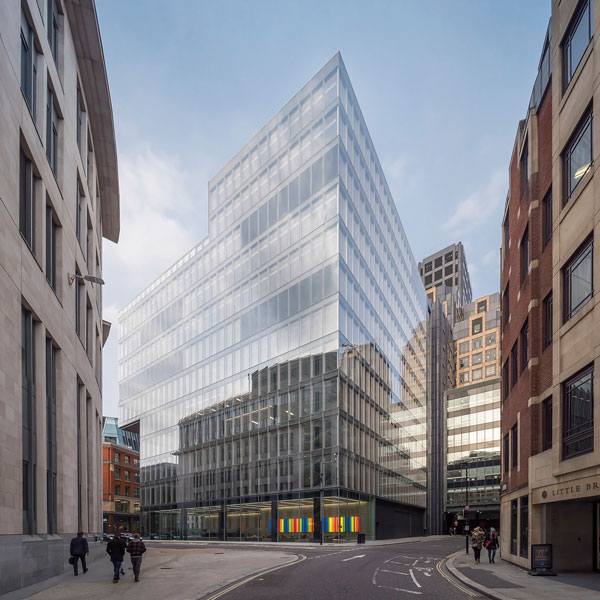 A modern steel-framed and flexible commercial building acts as an anchor-point for a wider central London mixed-use development.

According to architect Sheppard Robson, the building is a simple but finely detailed form that marks the step change between the edge of the Smithfield conversation area and the larger developments of the City.

It is distinctly modern in both form and materiality, with metal screens, and floor-to-ceiling glazing to reflect and embrace the scale of the capital’s modern environment. The design has allowed the building to integrate into the extensive public area improvements, which turn Bartholomew Close into a pedestrian-friendly zone, enlivened by a café and restaurant on the ground floor.

Flexibility is at the heart of the building’s steel-framed design as the structure is highly adaptable to the anticipated changing requirements of its users with generous floor-to-ceiling heights, alongside an efficient and adaptable floorplate.
William Hare erected 2,350t of steel for the scheme. The steel frame gains its stability from a reinforced concrete core and the diaphragm action of the floor slabs.

The structure was built with full traceability across every steel member and to a Eurocode design, which ensured that the European Standards for resistance, durability and fire resistance were met.

William Hare and structural engineer Waterman, together with the fire engineer, derived a value engineered fire and corrosion protection solution. This resulted in the building having a mix of fire protected members using intumescent paint, concrete encasement and fire boarding, meeting the financial constraints and end user requirements.

Typically, the floors are a composite design, with Holorib slabs supported by plate girders that span up to a maximum length of 17m.

Some of the project’s largest steelwork elements are at ground floor, where a series of deep cantilever transfer beams extends the façade to the boundary and above the basement perimeter piles.

These deep beams required extensive work to ensure they could be lifted into position, while the design had to make sure the splice connections did not interfere with the large service holes.

In summary, the judges say the project showcases how steel can deliver a highly flexible long-span commercial building within an urban context. The 9m corner cantilever of the upper floors over the entrance enhances the presence of the building in the public realm. The progressive procurement approach meant that the fabricators were appointed early, supporting the design team to maximise efficiency of design and fabrication.