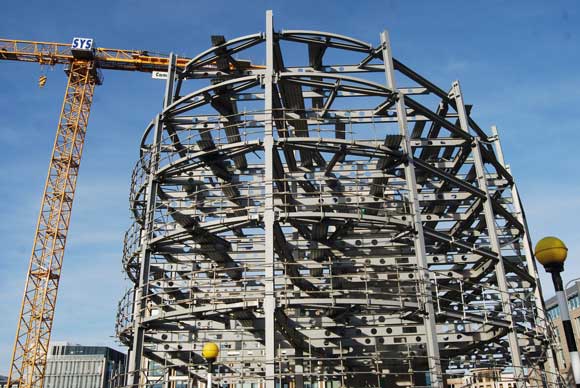 The bullnose feature elevation of IFC5

It has also been estimated that the finance industry spends in excess of £300M on goods and services each year, much of which will have been payments to local non-financial businesses, generating further economic activity – and ultimately tax revenue – on the island.

Consequently, it is not surprising that Jersey intends to remain at the forefront of the industry and to maintain the position it needs to redress a shortage of Grade A office accommodation.

The local finance industry has made it clear that new premises are needed for them to grow, while new prospective finance firms and employers considering the island have done likewise.

One of the solutions is the construction of the International Finance Centre (IFC) Jersey, a cluster of six stand-alone office blocks situated close to St Helier Esplanade.

This scheme will deliver 43,665m² of modern Grade A office space with private car and bicycle parking beneath the buildings, and a 520-space public car park on three levels below a new public park. High quality civic open space will be created on 50% of the IFC Jersey site that will also include a public park and a public square.

Wholly-owned by the States of Jersey government, Jersey Development Company (JDC) was set up in 2011 to oversee the scheme. Its Director Lee Henry says: “The office buildings will have a London specification and will set a new benchmark in terms of quality and design for the island.

“They feature excellent levels of natural light, column-free floorplates, high quality and highly glazed unitised façades.”
Construction of the IFC Jersey has been split into phases and the scheme will be delivered on a building-by-building basis in response to demand.

IFC 1 (see box) was completed in March and construction is now progressing on the second office block, IFC 5, which is due to complete by the end of July 2018. 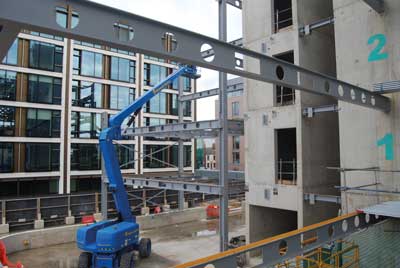 Bespoke cellular beams have been used for IFC5’s services integration

The third office building, the four-storey IFC 6, received detailed planning consent earlier this year and JDC is currently working up the technical design and seeking a pre-let to enable the construction of the building to commence in 2018.

“All of the offices will be steel-framed as the material provides the best solution for the long clear spans the development requires, as well as the built-in flexibility to divide the floorplates between tenants if required,” says MJP Architects Associate Tomasz Fiszer.

“Steel construction hasn’t been the norm on Jersey in the past, with many offices previously being built with concrete, adds Waterman Structures Director Richard Whitehead.

“However, by choosing a steel solution we are creating the high-quality open-plan offices the client wants.”

Speed of construction is also an important attribute of structural steelwork. Having started the steel erection in late August, Elland Steel Structures completed the frame and the installation of metal decking by early October.

Logistics play a big part when working on one of the Channel Islands, as all materials have to be shipped over from Portsmouth by freight ferry. However, Elland Steel has expertise gained from previous jobs on the island, including IFC 1, which put it in good stead.

In order to maintain a good workflow by always having sufficient steelwork on site for a day’s work, the company had to arrange for the initial steel shipments to arrive prior to the work commencing. In this way, and with subsequent shipments of steel arriving every other day thereafter, the company guaranteed it had steelwork on the island for the duration of the works.

Prior to the steel programme starting, main contractor Camerons had completed the building’s piled foundations, and the concrete works for the basement, ground floor slab and the structure’s stability-giving central core.

With a similar design to its completed neighbour, this office block’s steel frame is based around a regular grid with perimeter columns spaced at 7.5m centres and creating internal clear spans of up to 12m-long. The building will provide 6,400m² of space over six floors, have floor-to-ceiling windows on all four sides, and achieve a BREEAM “Excellent’ rating.

All of the services are accommodated within the depth of the floor beams, via a series of bespoke holes. These were fabricated and cut by Elland Steel Structures after some close coordination with the structural engineer and M&E consultant to ensure the right sized holes were in the right locations.

“As well as maximising the floor-to-ceiling heights within the building, putting the services through the beams helped keep the structure to its permitted 18m height,” says Mr Whitehead.

Moving away from the standard rectangular-shaped office, IFC 5 has a standout bullnose, rounded southern elevation, which mimics the site’s curved boundary alongside an adjacent roundabout. This architectural feature is formed with a series of faceted beams for the main frame, with curved secondary members on the outside supporting the cladding.

The remaining IFC 2, 3 and 4 will follow in the coming years, with an overall completion date for IFC Jersey set for some time between 2025 and 2030. 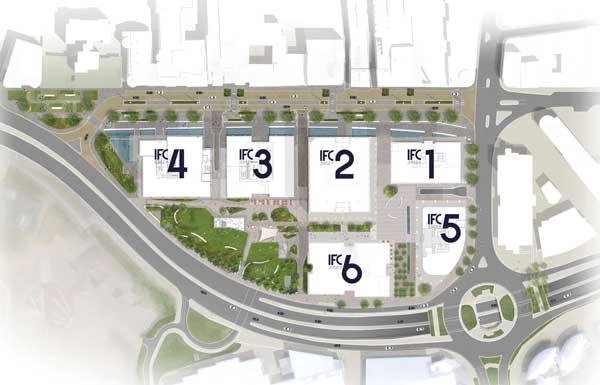 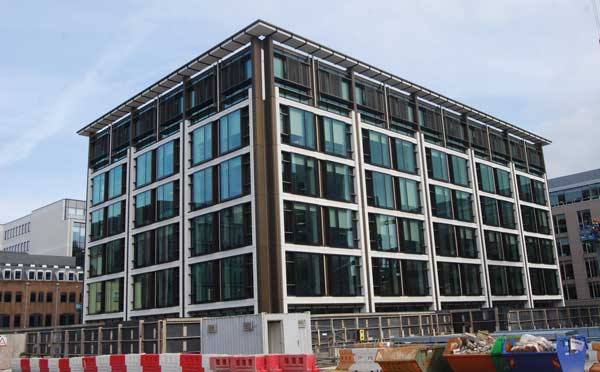 Known as IFC 1, the development’s first building has been described as a world-class business hub providing 6,300m² of high-quality Grade A office space, over six floors, in the heart of St Helier.

Elland Steel Structures fabricated, supplied and erected 600t of structural steelwork for this office block, which has the distinction of being one of the first structures in the Channel Islands to achieve a BREEAM ‘Excellent’ rating.

“Using steelwork allowed us to design a building with the required column-free spaces, as well as providing an integrated solution for all of the services within the steelwork’s depth,” explains Richard Whitehead, Director of Waterman Structures.