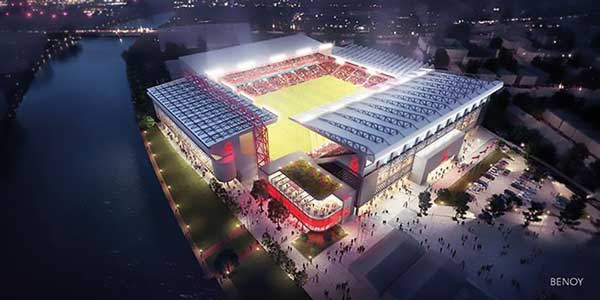 Championship football club Nottingham Forest has confirmed that, after extensive negotiations with the City Council, its stadium will undergo a wholesale redevelopment

The City Ground’s redevelopment will see the creation of a new world-class Peter Taylor Stand and improvements to the Brian Clough and Bridgford Stands.

The new, modern, state-of-the-art structure will see The City Ground’s capacity become the highest in the East Midlands, reaching 38,000 after completion.

The new Peter Taylor Stand will see the introduction of world-class facilities including a museum, a new club shop, range of hospitality lounge options and restaurants, and executive boxes.

In addition, there will be new spacious concourses for general-admission supporters as well as improved facilities for supporters with disabilities and a substantial increase in wheelchair spaces.

The club will now enter a period of consultation and engagement with the relevant supporter groups before making the necessary planning application.

Subject to the relevant consents, the club is hopeful that building work will commence at the end of the 2019-20 season.