A field near Milton Keynes is being transformed into a centre for sport, retail and leisure, with the MK Dons football team the star attraction. Virtually non stop value engineering has ensured an economical design, Margo Cole reports.

In the 1989 film “Field of Dreams”, ghostly voices advised Kevin Costner: “If you build it they will come”. It is not known if Pete Winkelman, chairman of Milton Keynes Football Club, has been hearing voices, but he is certainly following their advice.

The charismatic entrepreneur, who defied critics by relocating Wimbledon Football Club from South London to Milton Keynes, has put together an ambitious development plan that includes a 30,000-seat stadium for the club, despite its current position at the bottom of League One and average attendances of just under 5,000. Construction of the stadium has been under way for just over a year, and it could be complete in time for the start of the 2006/7 season.

Also included in the plans are an 80-bed hotel, a 5,000-seat arena that is set to be the home of the MK Lions basketball team and – looking further ahead – a Chelsea Village-style ring of duplex apartments around the stadium.

The first phase has been funded by deals that developer Inter MK (chief executive Mr Winkleman) secured with the local authority, development agencies and large retailers. After getting the land from Milton Keynes Council, Inter MK sold parcels off to ASDA and IKEA to pay the £42M cost of the new stadium. 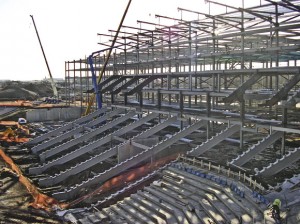 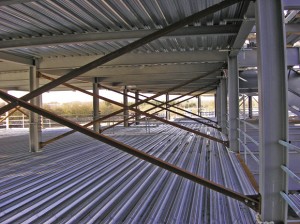 Every bay has been temporarily braced 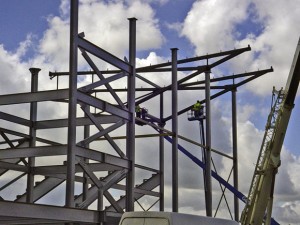 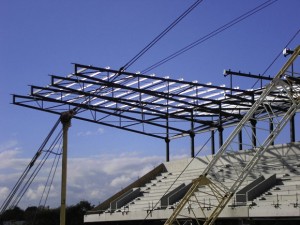 3D model of the stadium

With that money in the bank the challenge was to build the best stadium possible for the budget. MK Dons might not be riding high in the football league, but Mr Winkelman believes fervently the team will ultimately grace the highest division, and residents will turn out in large numbers to watch matches.

Music mogul Mr Winkelman is very much a “hands on” client, according to Mark Vinnicombe, Project Manager for Rowecord Engineering, which is building the main steel frame and roof of the stadium. He says: “He’s a nice guy, and he definitely likes to get involved in everything. He comes to all the design team meetings.”

Rowecord finds itself almost in the role of main contractor for the superstructure. Although subcontracted to Buckingham Group Contracting, which has a fixed price contract to build the stadium, Rowecord’s responsibilities include fixing precast concrete units on top tier and both supplying and fixing the metal decking for floors in the building that rings the bowl.

Main contractor Buckingham impressed Mr Winkleman when it converted the National Hockey Stadium into a temporary home for the Football Club. He brought the company in on the stadium project – by far its largest to date – when larger contractors could not agree to meet the budget. Buckingham managed to shave some of the costs off, and the design team made changes to make it affordable.

Rowecord’s first involvement was at the start of 2005, by which time the design had been finalised. However this does not mean there haven’t been changes. “When we first got involved the scheme was just the stadium, with plans later for an arena,” says Mr Vinnicombe. “Since then an 80-bed, four-star hotel has been added, and also provision for the duplex apartments.”

The hotel – which makes use of the frame on the West Stand – adds an extra 1,200t of steel to Rowecord’s original estimate, and a great deal more cost to the project as a whole. As a result, savings have had to be made elsewhere, which meant Rowecord was involved in value engineering from the word go.

The decision to add the hotel also has programme implications. “We’ve had to wait for information on the West Stand, as it has been redesigned to accommodate the hotel,” explains Mr Vinnicombe. “The steel has been beefed up in that area.”

So, despite the West stand being on the critical path, Rowecord had to start with the North and East Stands then move onto the more complex West and South.

The stadium, designed by HOK Sport, has two tiers of seating all the way round, with a concourse running the full circumference between the two. Unusually, the concourse is at ground level, with the pitch sunk in a 4m deep bowl and much of the lower tier of seating sitting directly on the banked sides of the bowl.

As a result, the steel structure supporting the roof is much lower than in traditional two tier stadia, and both tiers can be accessed directly from the concourse without the need for either stair towers or special access for the disabled.

The entire North and East Stands and half of the South have the lower tier of seating constructed from in situ concrete placed on the banked sides of the bowl, and in all stands the upper tier consists of precast concrete units supported by 1,020mm deep steel raking beams fixed to the main structural frame. For the West and half of the South Stands, however, the lower tier of seating is also supported by raking beams rather than on the earth bank to accommodate the future arena and the hotel.

Rowecord’s basic frame consists of two columns with the floor steel spanning the 7.2m between them, a 9m long triangular backspan section at roof level, and the first section of the cantilever roof and a raking beam. In all, there are 50 of these frames around the outside of the bowl, placed on a 7.2m grid.

For the columns and the floor beams, Rowecord has stuck with standard universal beam and column rolled sections. But – as part of the value engineering that has been a constant element of the project – the fabricator introduced the cheaper alternative of using welded plate girders for the 28m long raking beams.

Plate girders have also been used for the tips of the 31.8m long cantilever roof trusses. These cantilevers are erected in three sections. The first – at the back of the stand – go up as part of the initial frame construction, working from within the floor plate of the building. Then, the 14.2m long mid section and 10.2m tip are erected from the pitch level. The upper and lower chords of the cantilever trusses are made from 250 x 250 square hollow sections, while the infill steel is 114mm diameter circular hollow sections.

There is no tower crane on site, and all the steelwork has been erected using mobile cranes, with the erectors working from cherry pickers. “We haven’t had anyone out on the steelwork yet,” says Mr Vinnicombe. “We’ve planned the whole project not just around the fabrication and delivery to site, but also around the construction. Any big project like this has got to be construction-led.”

Rowecord must ensure the frame is stable throughout the construction process. Structural engineer SKM’s design is based on the roof acting as a diaphragm, so it is not stable until the entire structure is complete. To compensate, Rowecord is installing full height temporary cross-bracing in every bay. On the West Stand, the lower tier of raking beams also provide permanent bracing, so they have to be in place before the front section of the cantilever roof truss can be erected.

Rowecord started work on site in mid-August 2005 and will finish in April 2006, putting the scheme on schedule for completion in time for the start of the 2006/7 football season. It remains to be seen if Mr Winkelman’s dream will be realised, and the fans will then come.