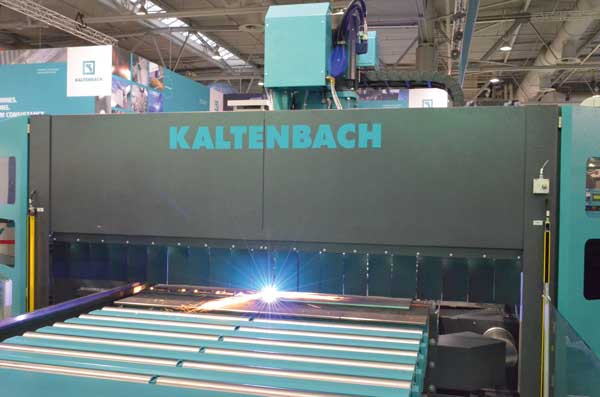 Steel manufacturing equipment producer Kaltenbach has announced the launch of the new KF range of processing centres for steel plate.

The new units have plate width capacities of 1.6m, 2.6m and 3.1m respectively, combined with a 6m-length capacity as standard.

All models in the new KF range are said to be designed for high productivity throughput of cut and machined plate components for industries such as structural fabrication and heavy engineering.

The KF machines work via an infeed gripper system, which clamps and controls the feed of the material through the solid portal frame of the machine itself. The gripper unit controls the plate from both the side and the rear, which is said to maintain a high degree of control and accuracy.

All machines are able to process materials up to 100mm thick and are equipped with a 14 tool, single head as standard. An optional second head can be added with a further 14 tools and working in synchronisation with the first to significantly increase the output capability.

Machine control is via a Windows-based touch-screen system for programme execution and machine operation, supported by the Lantek ‘Expert II Cut Plus’ software package for nesting, design and data import, with ‘Expert III’ for extended functionality and data feedback.