New plant houses have been built ‘inside out’ 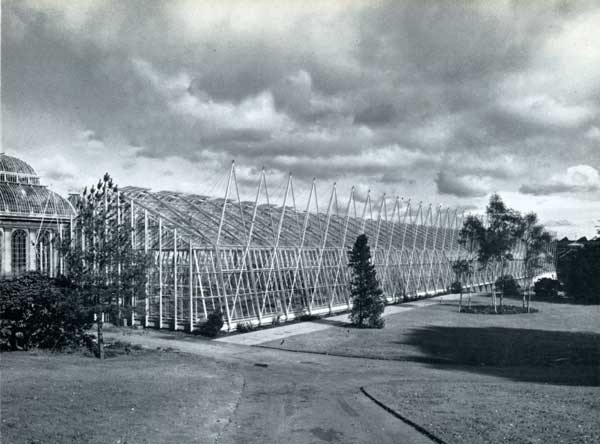 General view from the west of the main exhibition plant house

The new exhibition plant house and orchid house at the Royal Botanic Garden, Edinburgh, are structures of unusual shape and design. The buildings have been erected ‘inside-out’ with the supporting structures outside the glazing to protect them from the corrosive conditions normally existing in plant houses.

Designed by the Ministry of Public Building and Works they are unique buildings which have no internal framework and which depend for support on an intricate external structure of steel tubes and cable from which the glass is suspended.

The design has enabled exotic plants to be displayed in a natural setting on a scale never before achieved in a glasshouse anywhere and it has also minimised the risk of corrosion common to ferrous metals in plant houses.
The new main exhibition house is a single structure encompassing the entire plant area. It is sub-divided into five compartments of differing climatic environments and has an orchid house adjacent to it.

Preliminary design studies showed that a structural solution of this sort would produce minimum shadow and light interference to the plants inside and at the same time produce an architectural result pleasing and well suited to its position in the Royal Botanic Garden. Initially, the structure was conceived as a three-pinned portal of tubular steel members, but as the scheme developed a more subtle shape emerged which may be described as a ‘suspended portal frame’. 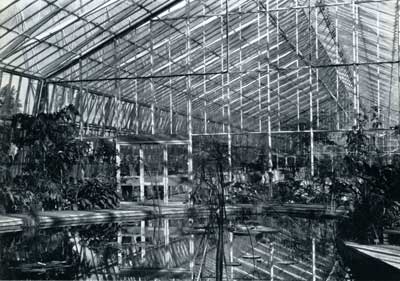 A revealing shot of the interior

This structure, which had to be as light as possible, is a mixture of basic portal frame and a suspension-type structure in which the action of the suspenders relieves the high bending moments in the rafter members, thereby allowing a considerable reduction in their section sizes.

The side framework consists of diamond-shaped lattice tetrahedra made up of light tubular members which project upwards above the rafters to twice the height of the eaves. The main tubular members are 3-in diameter, while the lacing members are solid bars ¾-in diameter. The rafters, which are of rectangular hollow section (RHS) 6 in. by 3 in., are prevented from sagging by the suspenders, which ride over the apex of each of the side frames. Interaction between the suspenders and the framework also provides resistance to side sway from the wind.

Suspension-type structures depend upon achieving the right forces within the suspenders to maintain them in tension under all conditions. They are prone to more movement than conventional frames and the control of this movement was very necessary because of the large glass areas involved. Because of the delicate balance of the load between the suspension action and the bending resistance of the portal frame, it was necessary to carry out a structural test on a full-scale mock-up of two bays of the framework and as a result of this a decision was taken to stiffen the rafter members. A computer was used during the structural design to establish the correct relative stiffness of portal and suspension action.

Transverse movement in the building has been taken care of by additional internal stiffening panels using aluminium members at two points in the 420 ft-length. Internally a 40-ft span prestressed concrete footbridge has been provided linking the east and west environments of the building and at the same time providing a viewing platform about 9 ft above ground level in the large central section.

High yield stress steel to BS 968 was used for the whole of the structural framework, all steel being galvanized by hot dipping. This produced a practical problem with the vertical tetrahedra since they were too large to be dipped in one piece. This was resolved by making each frame in two pieces. The protection at the joint was made good after welding with two coats of zinc-rich paint. The suspenders were all of ¼ in diameter and because of maintenance difficulties were made from stainless steel wire EN 58 to BS 1554. All external steelwork other than the wires is treated with aluminium paint to provide additional protection and for aesthetic reasons.

The Royal Botanic Garden, one of the world’s main centres of knowledge and practice in its sphere, extends to about 74 acres. It is visited annually by more than half a million people.

Its foundation dates back to 1670, which makes it the second oldest botanic garden in Britain. the oldest, founded in 1621, is in Oxford. The primary task of the Edinburgh Garden is botanical research, especially research in that branch of botany known as taxonomy, which comprises the accurate identification of plants and their classifications, affinities and distribution.

More than one and a half million plant specimens are kept in the Herbarium at the garden and its library of 40,000 volumes is one of the richest taxonomic libraries in the world.