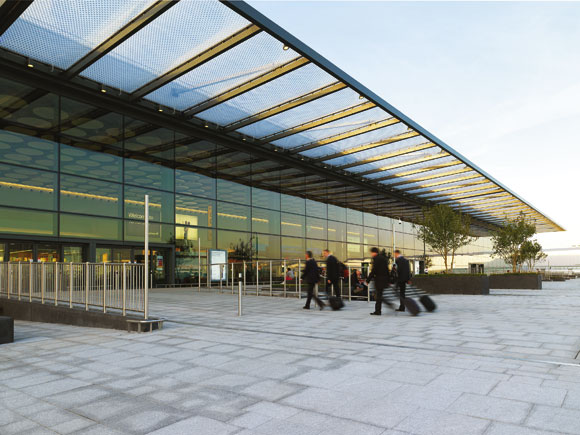 Heathrow Terminal 4 has been transformed into a light and airy airport building with the addition of a new extension featuring a 180m-long glazed façade.

Flying from Heathrow Terminal 4 was not always a particularly pleasant experience as the 1980s built structure had over the years become rather tired and past its sell by date in terms of passenger comfort. The building was congested, under lit and badly needed an overhaul, particularly as BAA had plans to move more airlines into the terminal as space was made available because of British Airways’ transfer of operations to the new Terminal 5.

In order to create space for more check-in desks within the terminal an extension to the front of the original building has been constructed. The redevelopment means the terminal has now changed from a seven airline terminal to one housing 39 airlines, and the expansion also provides self service units, ticket desks, retail areas and mezzanine offices.

The design brief for the extension required a structure which was similar to the existing building, but also one that created a more light and airy space for passengers. But most importantly, the structure also had to be bomb blast resistant in order to withstand a terror attack. This criteria played a key role in the design of the 180m long, 13m tall predominantly glazed steel framed extension.

Structural engineer for the project Buro Happold initially designed the steelwork frame to take the dead, live and wind loads as normal and then analysed the frame to determine its stiffness. This figure was passed on to security consultants TPS which was responsible for dynamically modelling the effects that an explosive device would have on the extension’s façade. Using this stiffness value, they were able to determine the blast loading on the structure and once this was known Buro Happold re-analysed the frame to calculate the deflection under loading.

“Some strengthening was needed to the frame, which was mostly localised and meant some steel sections had to be increased,” says Alex Johnston, Buro Happold Project Engineer. “The extension’s frame would absorb a potential blast and the connections have been designed so that these loads would also be absorbed back into the main (original) structure.” 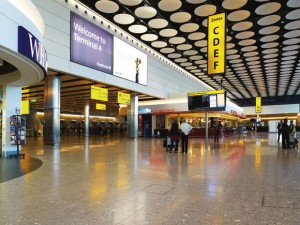 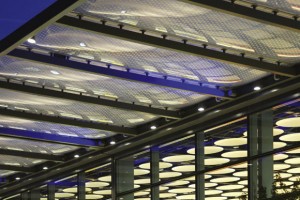 Once all of this information was collated the main façade as well as the extension’s main frame was designed. This comprises of a total of 17 bays, each 10.8m wide and all with a depth of 25m. Each bay is formed by a steel portal frame, while the long column free interior is formed by a series of 2m deep braced trusses. The only internal columns are located at either end of the extension, supporting the mezzanine offices.

Prior to the new extension being erected, the existing terminal’s canopy was removed in preparation for the addition of the new steel frame. However, once the cantilever canopy was dismantled the critical load path in the existing steelwork was altered and so an eight week programme was necessary whereby the old terminal building’s steel was stiffened up.

A steel solution for the new structure was always the preferred way to go, according to Mr Johnston. The existing terminal building has a steel frame, so marrying the two together seamlessly was easier with another steel frame for the new build.

“Steel is more flexible, easier to model with and the material is better for achieving the long spans which were required,” says Mr Johnston.

Another advantage in steel’s favour was offsite fabrication as the trusses were brought to site, by steelwork contractor Watson Steel Structures, fully assembled. This meant less on-site work, as the 25m-long trusses were simply lifted into position and spliced to their supporting columns. These supporting members are large fabricated 650 x 250 box sections, which were specified because of the loads they are transferring, especially during a bomb blast scenario.

“The trusses were site welded to the columns to form an aesthetically pleasing and seamless connection,” says Andy Luter, Watson Steel Structures’ Project Manager. “This was a little time-consuming, but a bolted connection would have spoiled the glazed façade.”

The area where the new extension is located was previously the Terminal 4 forecourt, which is essentially a bridge deck structure, and this threw up a challenge when it came to designing the steel frame. The new columns had to line up with the existing grid below and the original column heads needed to be strengthened to make sure loads of the extension were successfully transferred.

Working on the forecourt also meant the steel erection for the extension was done using one 80t-capacity mobile crane, the largest unit the area could support. “The erection of the structure on the upper deck necessitated that we had to carefully co-ordinate the delivery of steel with position of the crane together with the access platforms to ensure that the permissible deck loading was not exceeded. In addition large 6m x 4m spreader mats were utilised to spread load into the existing deck structure which also needed 10t forklift to set in position” adds Mr Luter.

At the front of the extension above the large glazed façade a new 10m deep steel canopy has also been erected. The cantilever canopy is clad with ETFE which was chosen specifically because it would just disintegrate in a bomb blast, rather than becoming a projectile or a piece of shrapnel.