January 2, 2020 by NSC in Profile, Projects and Features, This month's featured stories 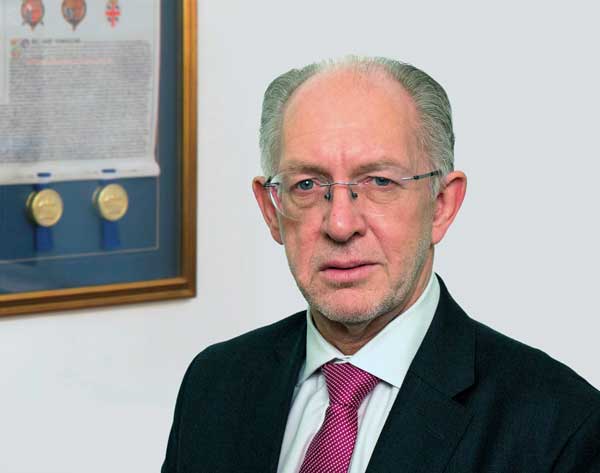 BCSA’s new Chief Executive Officer David Moore is no stranger to the steel construction sector and his background as Director of Engineering will stand him in good stead during some technically challenging years ahead, as he explains to Nick Barrett.

Challenging times are ahead for the construction industry’s technical experts as the European codes and standards are being comprehensively revised over the next few years.

Almost three dozen steel construction design guides will be updated and amended for 2023. Therefore, it is opportunely timed that BCSA’s Director of Engineering David Moore has moved up to the top job as Chief Executive Officer where he can oversee updating the design guides like the Blue Book and provide continuity of the BCSA’s deep involvement in the relevant technical committees.

“There will be challenging times ahead for the steel construction sector on a number of fronts, all of which fall under the remit of the CEO,” says David, who is a member of Structurals as well as having a PhD.

“Revising all the technical design guidance that we provide for architects and engineers is going to be a major project spread over a number of years, which will involve a lot of effort from all BCSA’s staff, but we have been preparing for it. Everything is in place with the appointment of a new Director of Engineering to continue the preparatory work and then execute what will be an essential and challenging project.”

David, has been steeped in steel construction and its technical development for 15 years at BCSA, where he was involved in the development of many of the national and European standards (Eurocodes) for steel design and execution. He is also an expert on CE marking of fabricated steelwork and is the author of over 70 peer reviewed publications and design guides, some of which are used daily by practising engineers.

Before BCSA he spent 23 years at the Building Research Establishment (BRE) where he was part of the Construction Division during its privatisation period, and led a team of 32 scientists, directing its Centre for Structural and Geotechnical Engineering.

During his time at the BRE he came into intimate contact with the steel sector, managing the construction and testing of three full-scale buildings at BRE’s Cardington facility. In the resulting fire tests steel emerged as by far the best performing structural framing material. “Those were really exciting tests, and resulted in a new approach to the design of composite flooring systems subject to fire,” remembers David, “the experiments were carried out on full size structures and I don’t think they will ever be repeated.”

Assuming Brexit now goes ahead following the decisive election result, whether with a deal or without, there will be a period of tough negotiating with former European Union partners as well as any new markets that trade related technical deals have to be struck with; all of which the new CEO is well qualified to oversee on behalf of steel construction.

“I have represented the steel industry on European, national and government committees and regularly lobbied MEPs, government ministers, MPs and civil servants,” says David, “and I will be passing on the knowledge gained to my successor as Director of Engineering.”

As Director of Engineering David organised and established industry committees and groups, including the Process and Technical committee, the Digital Technology Group, the Steel Stockholders Group, the Cold-formed Steel and Decking Group and the National Structural Steelwork Specification Steering Committee, as well as chairing the Fabrication and Welding Group which is one of the BCSA’s biggest committees.

He has also been involved in the development of several BCSA publications including the National Structural Steelwork Specification (NSSS), one of the industry ‘bibles’ whose 7th edition will be released in 2020.

David’s external roles included acting as chairman of the British Standards Institution (BSI) committee responsible for the UK’s input into the development of the steel Eurocodes, the Execution standards for structural steel and the CE marking standard for fabricated structural steel.

He is also the leader of the UK delegation for steel construction and represents the UK steel industry’s views at the Comité European de Normalisation (CEN) committees responsible for the development of the steel design Eurocodes and the Execution and CE Marking standards.

He took up his new role in early December and he hopes to organise a trade visit for the steel construction sector to China. David explains: “We recently hosted a delegation from the Chinese steel industry which produces around 70 million tonnes a year, compared to our 900,000 tonnes in the UK.

We would like to see the market nearer its previous peak of 1.4 million tonnes. The UK steel construction sector is recognised as the world leaders and I think the Chinese learned a few things from us. There might well be things we can learn from them, so a visit could be worthwhile.”

The day-to-day experience David has acquired over the past 15 years working with BCSA’s Steelwork Contractor and Industry members has provided him with detailed knowledge, insight and understanding of what is required and needed for and from the UK constructional steelwork sector.

David is excited by the opportunity and looks forward to working closely with BCSA members to ensure they get the most out of membership, continue to be represented as a sector on key issues and ensuring ever closer collaboration with consulting engineers.

Under its new leadership BCSA will continue to campaign on the wide range of issues affecting steelwork contractors and companies and colleagues in specialist engineering sectors, such as ensuring ‘level playing fields’ with overseas contractors coming into the UK market. “We have to be sure that health and safety, and product quality standards match the high benchmark set by UK steelwork contractors.”

Another area David has said will have considerable focus under his reign is sustainability. “Steel has an outstanding sustainability case and I intend to spread that message in my new role. This is an imperative time for the construction sector to tackle sustainability especially carbon and I’m keen to build upon the good work the steel sector have and continue to do to tackle this issue.”

The future for steel construction in the UK looks promising, although there are changes in the market to be monitored and new challenges to be met. David said: “I see a rising interest in modular and offsite building, all of which suggest an increasing role for steel.”

His appetite for promoting steel construction and BCSA’s members remains strong however: “I see my new BCSA role as a career pinnacle. I look forward to the years ahead working closely with BCSA members and our stakeholders representing our sector with much excitement”.