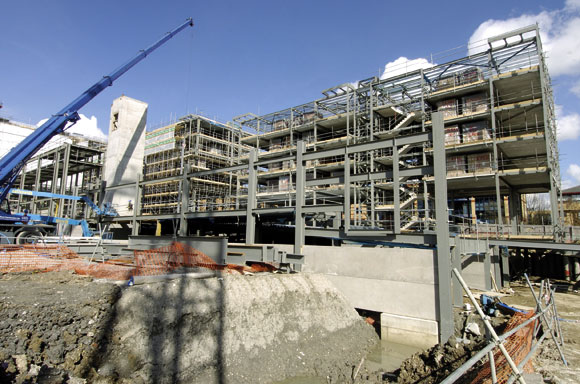 A £100M retail and residential development in Milton Keynes is making substantial and innovative use of steel to integrate a number of different grid plans. Damian Arnold reports.

The Abbeygate development is set to become a landmark in Milton Keynes town centre, consisting of a large Sainsbury’s supermarket with 11 residential blocks set above two basement levels of car parking. The project is making extensive use of steel in order to achieve a number of different grid plans.

Essentially the two basement levels of car parking and the retail level all have the same column grid. However, above this the residential blocks have a much denser column grid and this has required steelwork contractor Rowecord Engineering to erect a large transfer deck above the Sainsbury’s supermarket.

Under this solution, the loads from the 11 residential blocks that surround a roof garden above the ground floor retail building are transferred into the steel deck that forms part of the Sainsbury’s roof structure.

“It’s impossible to achieve continuity of columns because of the different demands of those spaces so we needed a transfer structure to resolve the different grids,” he says. 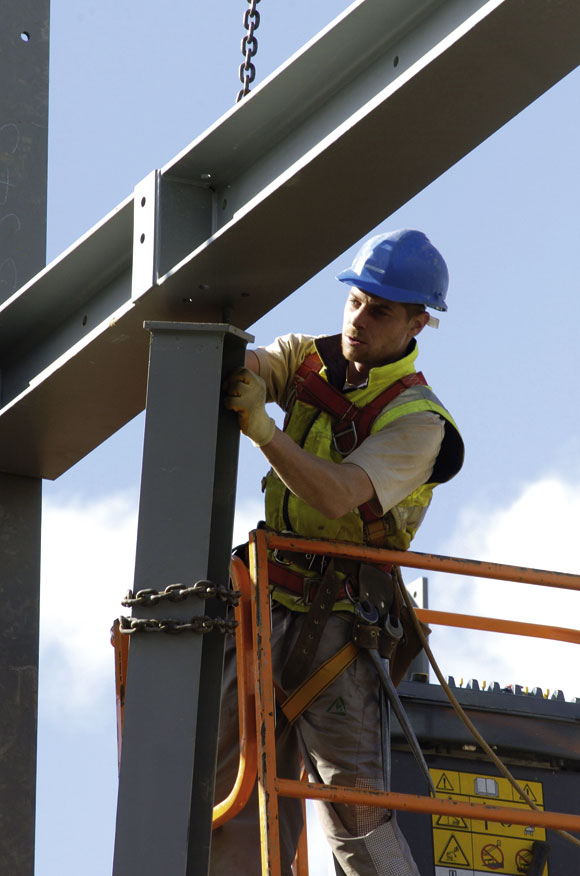 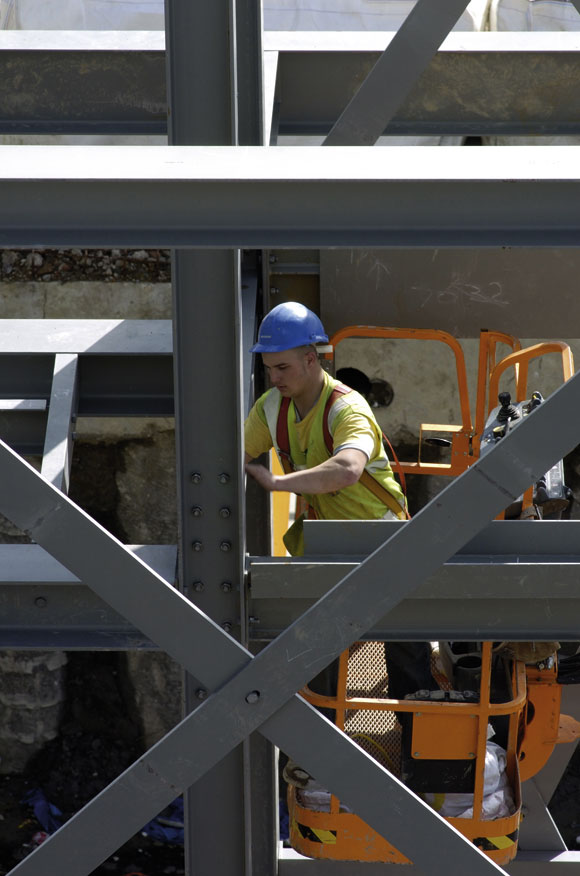 Temporary cross bracing has been used throughout the project

The transfer deck is needed because many of the elements in the development have vastly different column configurations that could not be lined up, says Project Engineer of structural engineer Capita Symonds Peter Dawson.

Once clear that this was the way forward, a steel solution was the only answer because of the long spans in the transfer deck, adds Dawson.

“The biggest advantage steel has over reinforced concrete in projects such as this is that it can deal with long spans. For example, the deliveries service yard for the supermarket on the ground floor requires a 27m column free area. The retail floor above thus had to be hung from transfer beams above that which span the full width of the service yard. These beams are 2m deep plate girders each weighing approximately 30t. When you require structural members to work that hard over such a long span, steel is superior to concrete because of its tensile properties.”

“If you were to work up a solution in reinforced concrete the structural elements would have to be very, very deep and heavily reinforced and the loads would be enormous,” says Edwards.

The challenge for Edwards and his team is that construction of the residential units needs to begin before the steel transfer deck can be completed.

This is because under the terms of the contract the client requires a certain amount of residential units to be ready by certain dates. Meeting those deadlines by building up the project layer by layer would have been tough, says Edwards.

“The critical path of the project is the residential buildings and keeping the momentum going right through to fit out,” he says. “Therefore we have gone straight into the erection of the residential units.”

And already, work is continuing apace on the residential structures with  fit out and cladding under way on four blocks.

Value engineering found that they could build up “slices” of the basement floors, retail building and steel transfer deck on which the residential blocks will sit.

But this solution has created a big challenge for the project team to maintain structural stability of the residential blocks going up before the steel transfer deck is fully complete, says Edwards.

“When complete this will be a very stable structure but the problem we have is that we don’t want to build the structure up layer by layer because we need to finish the residential units earlier and this has given us a challenge to maintain the stability of the structure as we build it.”

Temporary cross and vertical bracing has been used in the basement levels and the residential blocks. And by the time the temporary bracing is removed when the residential buildings are fitted out, greater structural stiffness will have been added to the whole structure by lifting in pre-cast concrete shear walls at certain points on the lower levels. The pre-cast wall panels which are craned in and then grouted up were much quicker to install then casting the walls in-situ.

Early completion of the shear walls helps to keep the structure stable during construction when there are uneven loads on the structure.

“We need those walls operational because they provide vital structural stiffness to the overall scheme,” says Edwards. 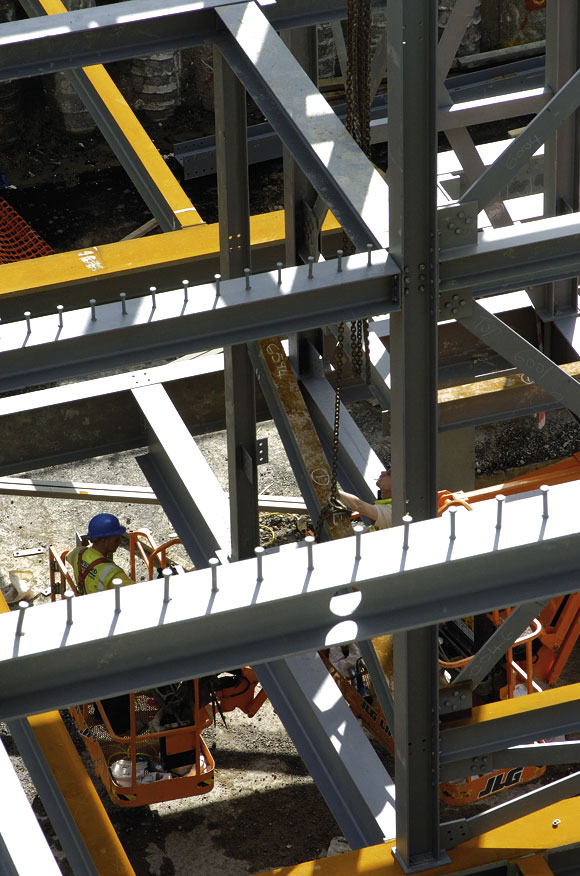 Abbeygate is a large mixed-use scheme that comprises 441 residential units, a Sainsbury’s supermarket as well as 10 other retail units and two basement levels with underground parking for 600 cars.

The residential units come in 11 blocks, vary from four to 10 storeys and surround a roof garden, complete with water feature, that tops the ground floor retail building. There are also two other residential blocks outside  the perimeter of the main site and a nursery building.

Altogether there are 30,000m² of steel decking used on the job and 5,000t of structural steel. The steel is fabricated at Rowecord’s facility in Newport, south Wales.

HBG started on site with a 142 week design and build construction contract in March 2006 with the driving of 500 mainly 750mm, but some 600mm, steel reinforced concrete piles and the contiguous piled wall to retain the car parking basement structure. At the time of writing the basement is dug, the contiguous wall retaining it is complete and the residential structures surrounding the site are going up.

Once the frame of the building is completed, the steelwork will be entwined with mechanical and engineering services integrated into the structural steel design rather than exposed or part of the cladding system, says Mr Dawson.

“There is a very high degree of M&E service integration within the steelwork which is quite unusual,” he says. “The services run through the webs of beams and in some places we’ve had to allow for holes in the steelwork of up to 1m². It’s been a very extensive coordination exercise between the structural engineer and the services engineer.”