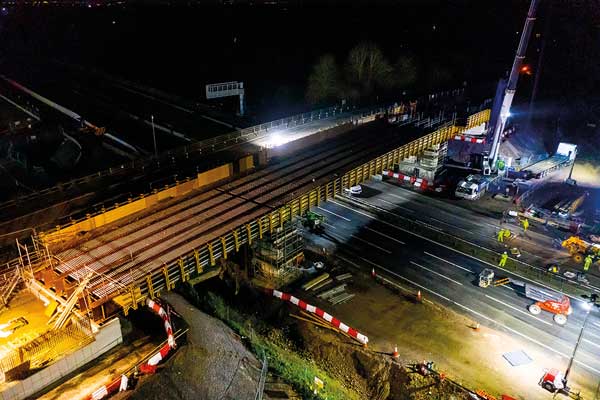 Cleveland Bridge has installed an 82.4m-long, 400t steel bridge at Monkey Island as part of a major upgrade of the M4 motorway between junctions 3 and 12.

Working on behalf of Highways England, the job was carried out by main contractor, Balfour Beatty/Vinci Joint Venture (BBVJV).

The bridge forms part of a scheme that will eventually see a total of 11 bridges replaced along the M4 in Berkshire, as the highway is upgraded to a smart motorway.

Designed by Arcadis/Jacobs and fabricated by Cleveland Bridge, the bridge was delivered to site from Darlington in nine braced pairs, before being assembled and installed during a 54-hour road closure.

The name Monkey Island derives from Monks Eyot, meaning Monks’ Island, after a monastery that existed nearby from 1197 until the dissolution of the monasteries in the 1530s.