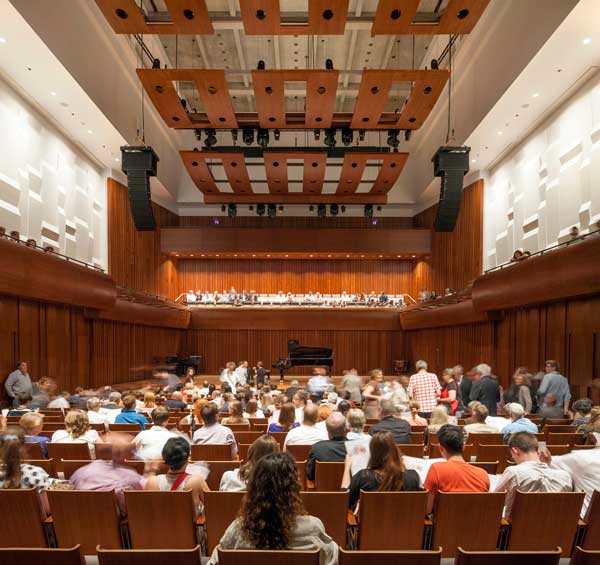 Designed to meet the highest acoustic performance requirements, Milton Court is a £89M facility built for the Guildhall School of Music & Drama.

The concert hall and studio theatre were designed to meet high acoustic performance requirements utilising a steel ‘box-in-box’ principle, which gave the benefit of acoustically isolating each internal part of the building.

Acoustic isolation was also achieved by adopting an internal steel frame encased in concrete with walls constructed out of dense blockwork.

“When WSP became involved midway through the project scheme design stage one of the main items we reviewed was changing the studio construction to steelwork with blockwork infill cavity walls,” says WSP Technical Director Matthew Coleman.

“The steel frame was quick to erect allowing the infill blockwork walls to be constructed afterwards to suit other works onsite and off the critical path.”

The studio also had a composite slab roof and an internal acoustically separated suspended floor slab. Every element of the structure was seated on isolation bearings. 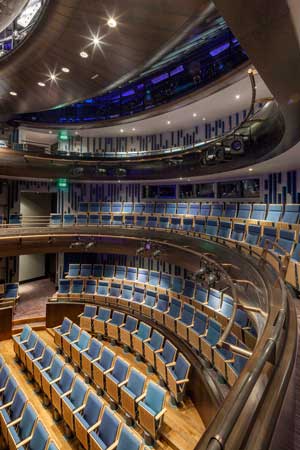 The acoustically isolated suspended floor slab was constructed utilising Omnia units spanning between upturned steel ‘T’ sections, which in turn were seated on pre-levelled and grouted acoustic bearings. Once all of the units were in place, the whole area had to be completely sealed prior to concreting to prevent any grout leak and consequently a breach of the acoustic isolation.

Due to all columns being seated on bearings this necessitated considerable temporary works to stabilise each structure during construction. To compound the problem the steelwork contractor was not permitted to connect to the adjacent walls due to the high quality finish.

“Any temporary bolting, tying and wedging – due to the structure not being stable until sufficient bays were erected – had to be carefully accounted for,” says Sir Robert McAlpine Project Manager Martin Sheward.

“All wedges used in the voids had to be uniquely identified and be put on my desk when removed so I knew they had been removed and accounted for.”

Checking no temporary member was left in place was key, as left behind they would have compromised the building’s acoustics.

Another challenge involved the construction of the main tower structure. This work was well in advance of level six before the commencement of the steel erection and this meant that the internal steelwork to the studio theatre had to be erected within a closed concrete box.

As a consequence early coordination was required to ensure timely supply of lifting beams and lifting lugs to be cast into the theatre roof slab to facilitate erection of the structural steel.

Steelwork is key to this world-class music and drama facility, say the judges.