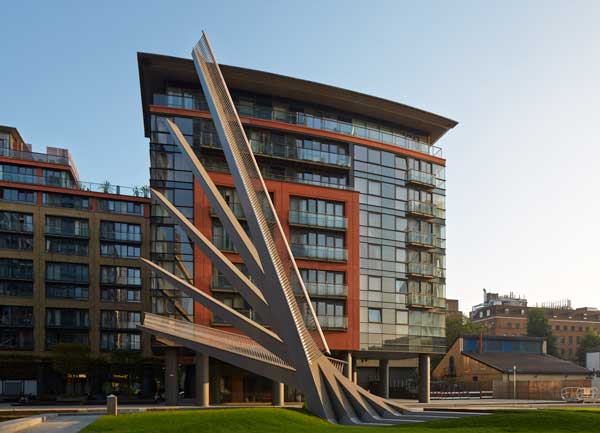 A moving footbridge with a deck that unfurls like a Japanese fan has become a landmark structure at Merchant Square in Paddington.

Connecting buildings either side of the canal and replacing an existing crossing at a new mixed-use development, the new bridge is 3m wide and spans 20m. It is divided into five slender fingers which are raised using hydraulic jacks with an action similar to that of a traditional Japanese hand fan

Inspiration for the fan-like design came from the desire to have an easy to maintain structure, and would become a landmark.

The client also wanted a bridge that would reflect the quality of the surrounding offices as well as improving the connectivity across the basin. 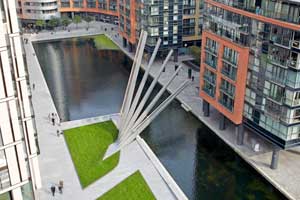 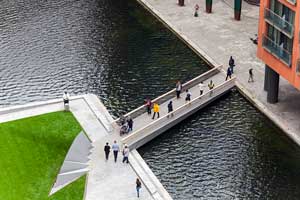 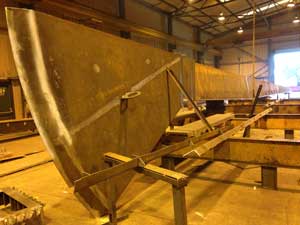 Knight Architects Associate Bart Halaczek, says: “Our competition-winning design concept is both simple and spectacular. A lifting bridge was the only realistic option for this tight footprint as there is no room for pedestrian ramps.”

Choosing the correct material for the bridge was an important consideration and the design team says it looked at a number of materials and steel was finally chosen, as it is relatively lightweight and easy to fabricate.

Alternative materials including aluminium and stainless steel were considered for the primary structural members, however these were not found to provide either the necessary structural performance or a cost-effective alternative to conventional steel.

“The advantages of steel were a high strength-to-weight ratio, cost and precision. Tolerances of less than 3mm were achieved in the final installed beams,” explains AKT II Project Engineer Daniel Bosia.

The fabricated steel beams forming the deck open in sequence, with the first rising to an angle of 70 degrees and the last achieving the required clearance over the canal of 2.5m tall by 5.5m wide at mid-channel.

Shaped counterweights assist the hydraulic mechanism and reduce the energy required to move the structure. The bridge balustrades are formed from twin rows of inclined stainless steel rods, overlapping to form a robust yet highly transparent structure. The handrail houses a continuous low energy LED downlight which provides excellent and uniform functional illumination of the walking surface and the edge, as well as offering an attractive lighting feature.

The fine, hard-wearing natural stone aggregate was selected to match the high quality palette of finishes used elsewhere in the Merchant Square landscape proposals.  The counterweights are formed from fabricated flat steel plates and the finish on the sculpted counterweights is a painted version to match that of the beams.

The fabricated steel beams received a high-quality painted finish to provide a highly durable protective coating. The top surface of the beams are finished in a similarly durable epoxy and aggregate non-slip finish which has been proven in aggressive environments and on lifting bridges.

Access to the site for deliveries and conventional crane operation was not possible which meant that the fabricated elements had to be loaded onto a barge further up the canal and then towed to site for installation.

Lifting operations were restricted to the use of a barge-mounted crane that only had limited capacity, so the installation was challenging but in the end went very well.

European Land CEO Richard Banks says: “Bridges are a crucial element of the built environment at Merchant Square and, therefore, it was important for the new footbridge crossing the Grand Union Canal to enhance the public realm, not only practically but visually. Knight Architects have achieved this by introducing vertical movement to the design to create a bridge that is highly visible and dramatic.”

The erection of this novel structure was solved imaginatively by the contractor, as were the extreme requirements for accuracy. This is in the tradition of exciting sculptural bridges in steelwork at this development say the judges.