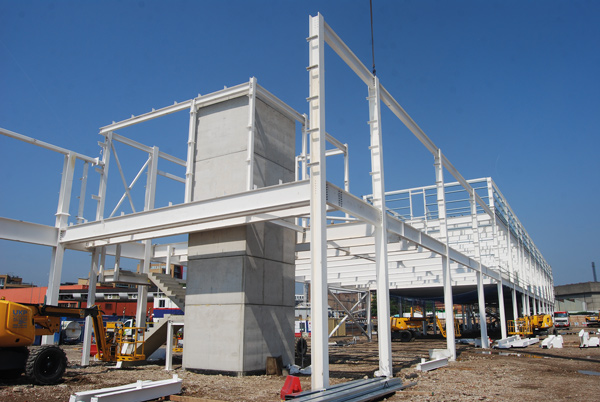 Steel for the interim market goes up

The area is being transformed and will become a much sought after place to live and work. As well as the creation of a new park to run parallel with the river, the redevelopment of the iconic Battersea Power Station, new embassies for the USA and the Netherlands, the area will also benefit from the extension of the Northern Line and the opening of two new underground stations.

Also taking place in the regeneration area is the redevelopment of the New Covent Garden Market site. The world-famous fruit, vegetable and flower market currently occupies a vast 57-acre site, which it moved into in the early 1970s after relocating from Covent Garden in central London.

The seven-year scheme will deliver over 46,500m² of new market facilities across 37-acres of the existing site, which will house the 200 market businesses currently employing around 2,500 people.

The remaining 20-acres within the New Covent Garden site area will be redeveloped to accommodate 3,000 new homes, 12,500m² of office space and 9,200m² of retail, leisure and community facilities, including shops, cafes and restaurants.

The latter structure will temporarily house the wholesale flowers sector of the New Covent Garden business for approximately six years while the old premises are demolished and new buildings erected on that plot. This phased approach will keep the market operational throughout the construction programme, which is vital.

St. Modwen Construction Manager Neal Haywood says the design and delivery of the development made steel frames critical for the project. 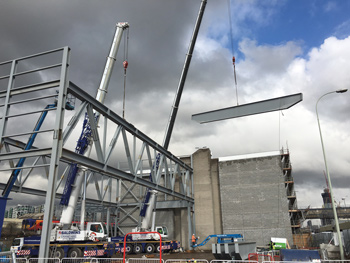 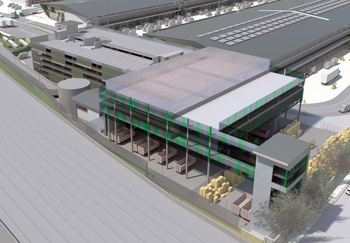 Visualisation of how the interim flower market will look

“Although ’temporary’ the interim flower market will be state-of-the-art in design terms and using steel in the construction means we can create the large, clear spans needed for modern market buildings.

“Steel also has the added advantage of being able to be re-cycled and re-used when the building is dismantled in six years’ time. It also means that we can use light foundations, which in turn will benefit the re-use of the site itself in 2022.”

Hambleton Steel has been contracted to fabricate, supply and erect the steelwork for both of these structures.

For the interim flower market the company will erect close to 1,000t of steelwork. The structure is being built on the site of the former entrance to the market.

Although temporary in name only, it will provide modern facilities for its brief lifespan, before the flower market relocates again to its new permanent home.

The market building measures approximately 200m-long × 70m-wide and consists of the large ground floor market zone with a central two-storey zone running along the spine of the building.

The western elevation of the market building will incorporate a ramp leading to a first floor parking area for delivery vans that will be able to unload and load direct from the upper storey.

Founded on pad foundations, the structure is a braced frame with the steelwork based around a grid with perimeter columns spaced at 9m centres, and with internal spans of up to 15m.

Hambleton Steel Contracts Director Andy Fixter says the company erected the central two-storey element initially as this then provided the stability for the two outer single-storey parts of the market.

The steel programme for Hambleton began earlier this year with the recycling centre, which is being constructed directly to the south of the interim market.

Central to this structure are a pair of parallel 40m-long × 6m-deep trusses that create the open plan ground floor space for the recycling centre, while also providing the support for the rooftop football pitches.

Positioned 9m above ground level the trusses form the central spine of the structure. Consequently the trusses and their supporting columns were the first parts of the steelwork to be erected.

The six pitches are arranged in a double-deck formation, with three positioned within the trusses’ depth – one between the trusses and two on either side – and the other three located on the rooftop.

A series of plate girders, positioned at 6m centres and supporting composite metal decking, span between the trusses and the outer perimeter columns to form the two decks for the pitches.

“A lot of dynamic loading analysis was required for the design of the two decks of sports pitches,” says Aecom Project Director Alex Goulds. “Plate girders were then chosen as the most cost-efficient solution for the required 20m spans.”

To erect the trusses Hambleton first had to install the columns at either end and temporarily prop them to provide stability.

All of the structure’s perimeter columns are spliced 18.5m-high sections that extend beyond the height of the trusses to form a high-level parapet.

The company brought each truss to site in six pieces, three upper and three lower sections. These were then bolted together on site to form one large 75t truss, which was then tandem lifted into place using two 130t-capacity mobile cranes.

The interim market is due to be completed at the end of the year, by which time a number of other buildings, many of them steel-framed, within the New Covent Garden redevelopment will have begun.