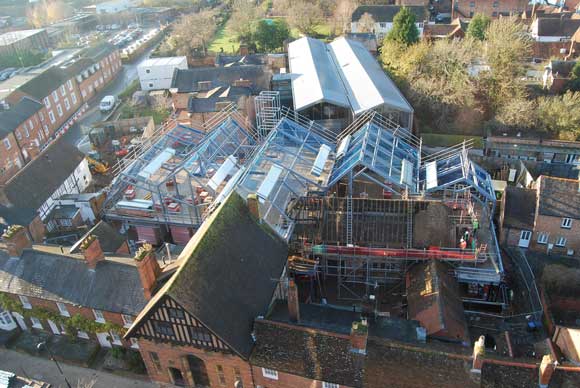 A 30-strong workforce of skilled costume makers have been temporarily relocated, while the Royal Shakespeare Company redevelops its workshops with the aid of steel construction. Martin Cooper reports from Stratford-upon-Avon.

“We have the largest in-house costume-making department of any British theatre, but unfortunately the premises were no longer fit-for-purpose as they consisted of a collection of run-down buildings that have been added to and altered over the years,” explains RSC Technical Director Stephen Rebbeck.

The project, which has been funded by public contributions and a National Lottery grant, includes demolishing most of the old costume department, with the exception of two listed buildings and constructing a new three-storey steel-framed building that will connect into the retained structures to provide new costume workshops, a maintenance workshop and an exhibition space.

All of this work is being carried out in an extremely confined site, sandwiched between a row of RSC-owned cottages, usually rented out to actors, a Grade II-listed 1887 former scene dock which was built for the original Shakespeare Memorial Theatre and the RSC’s Headquarters building.

Interestingly, the old scene dock, which is set in the middle of the row of cottages is being converted into an entrance hub, not just for the new costume department, but also for the HQ. Another important aspect of the project is to ensure the new premises are visitor friendly, with plenty of corridor space to allow tour groups to be shown around without disturbing the workers. 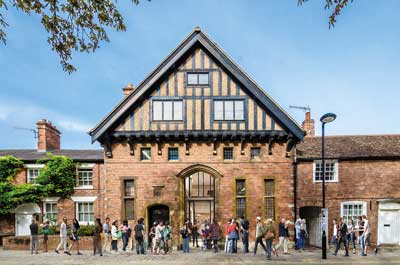 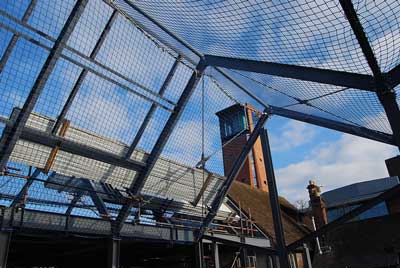 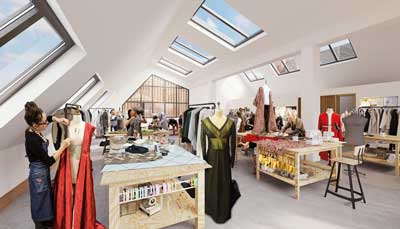 Working on behalf of the RSC, main contractor Stepnell started on site in February 2019. As well as demolishing large parts of the old costume workshop, the company also excavated a new lower ground floor. Originally the site’s footprint was sloped, and the new lowest level matches the front elevation and its new entrance.

The excavation programme meant Stepnell had to underpin the two retained structures and the surrounding cottages, to make sure they remained structurally stable throughout the works.

The new lower level necessitated the installation of a sheet pile retaining wall around two sides of the site’s footprint. This sheet pile wall, in conjunction with traditional concrete pads, forms the foundations of the new steel superstructure.

The steel frame has been designed with braced bays and moment frames to provide lateral stability in two orthogonal directions. The new building has suspended slabs at first and second floor levels, which are constructed with concrete cast onto a total of 750m² of profiled metal decking.

Topping the new build, the roof profile is blended into its traditional surroundings, taking the form of a succession of steeply pitched slate tiled roofs. The steel design has utilised A-shaped trusses, to span the full width of each of the five building portions to give open-plan, column-free spaces at first and second floor levels. The roof trusses are tied at eaves level and use Macalloy tension rod bracing across their double height roof spaces.

Using a steel solution for the project offered the team a number of advantages, including a relatively easy way of forming the 10m-long open spans, according to Stepnell Project Manager Will Smith.

“A steel frame solution is also well suited to the size and confined nature of the site, while being ideal for the repeating pitched roof configuration.

“The challenging project delivery programme also dictated the use of a structural steel frame.”

As the site is surrounded by historic and sensitive buildings, a significant project challenge was accessing and feeding the site, and working within the limited erection working space.

There is only one confined access route onto site, and this meant lay-down areas and craneage space became progressively tighter as steelwork contractor Coventry Construction erected the new structure.

All of these challenges were exacerbated by the fact that there is no machine access to the building perimeter so all of the steel erection had to be carried out from within the building footprint.

“We did think about having a tower crane on site, but there isn’t enough room and so the steel frame for the new structure was erected over a four-week period using a single 30t-capacity mobile crane,” says Mr Smith. “In addition, the new steel structure abuts the retained fragile historic buildings, prompting the need for a delicate and precise erection procedure.”

As well as the scene dock building, which is being converted into an entrance with two new steel-framed floors, the other retained historic structure is a former stables block. This structure originally formed part of the costume workshop cluster and will be amalgamated and connected into the new scheme.

Structural steelwork is being further utilised within these retained historic buildings, to form stability bracing to the existing delicate traditional brick and timber roof structures.

The final steelwork element of the project was the erection of a single storey link building that joins the new build costume workshops to the RSC HQ, creating the new access route from the entrance hub.

The new costume workshops are scheduled to be complete by July, when the RSC’s team of specialist workers will be able to return from their temporary premises. The first tours of the site will then begin in January 2021.