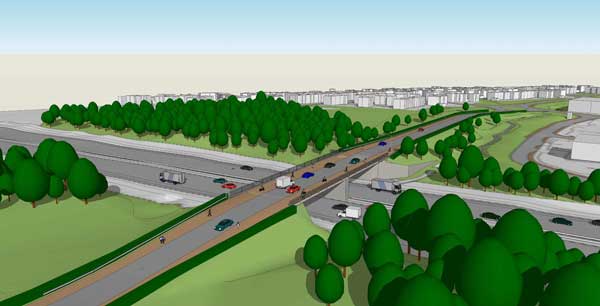 Balfour Beatty has been awarded the £9.3M scheme to build a new steel composite road bridge over the M1 for Leicestershire County Council through the Midlands Highways Alliance Framework (MHAF).

The 52m-long steel bridge will be supported by a pier located in the M1 central reserve. The project also includes the construction of approximately 350m of two lane single-carriageway roads, foot and cycle ways.

The project will connect the New Lubbesthorpe Sustainable Urban Extension (NLSUE) development to the road network in the east, and provide better access to local facilities and employment for thousands of people set to live there in the coming years.

Balfour Beatty Managing Director for the West Midlands Mike Reade, said: “Through this latest award we will demonstrate Balfour Beatty’s ability to deliver vital transport infrastructure schemes while offering clear benefits to the local community. We have now secured £20m of work through the MHAF since 2014 and we look forward to delivering much more.”

The project will be completed during the summer of 2016.