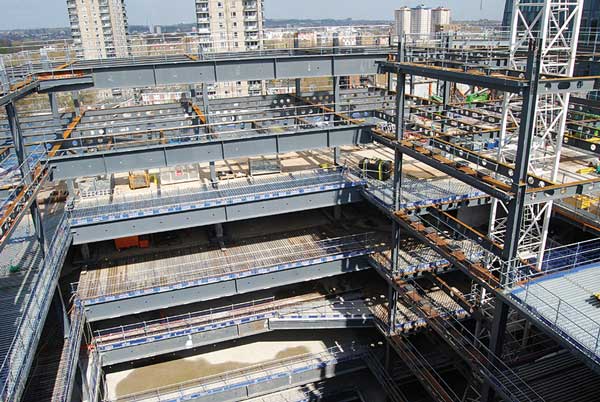 Originally opened in 1997, the concrete-framed 1 Triton Square in central London is being refurbished and enlarged with three new upper levels and additional internal floor space partially infilling an atrium.

According to project structural engineer Arup, the decision to use a steel-framed solution for the project’s new additions was because the design needed to employ a lightweight solution.

A range of innovative strengthening techniques for the existing structure have also been employed, which has resulted in almost doubling the internal area of the building.

Unusually for a concrete-framed structure, 1 Triton Square’s original design contained four braced steel cores, one in each corner. Each of the cores is being heightened up to the top floor level with new steelwork.

Bracing has been replaced in the cores and where possible the strengthening of existing steel columns has typically been undertaken by welding steel plates to the existing UC sections.

These plates have typically been positioned between the flanges of the UC section, allowing the size of the columns to remain largely unchanged while achieving a significant increase in capacity.

Working on behalf of main contractor Lendlease, William Hare is fabricating, supplying and erecting 1,920t of steelwork for the project, which will complete in late 2020.