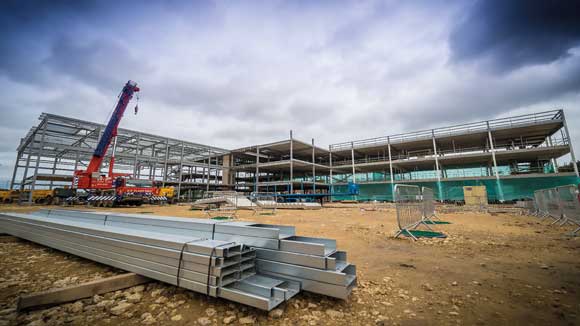 Steel construction was chosen for its speed of erection

A standardised steel-framed design is helping a school project in the North East of England to quickly take shape. Martin Cooper reports from Hartlepool.

The Education and Skills Funding Agency [ESFA] has appointed BAM Construction for this Capital Framework North East Batch A of priority schools.

Four of the projects are steel-framed secondary schools, replacing existing and out-of-date premises. The fifth project, a primary school, has a modular light steel design.

The batch consists of two schools in Hartlepool, and one each in Durham, Houghton Le Spring, and Whickham, Newcastle.

The first of the two Hartlepool projects to get started is the English Martyrs School, located on the western fringes of the town. 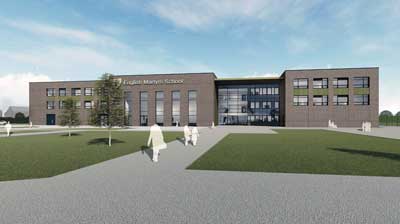 The school is scheduled to complete in May 2020 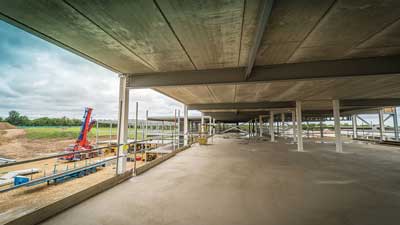 The steelwork supports precast planks to form the floors 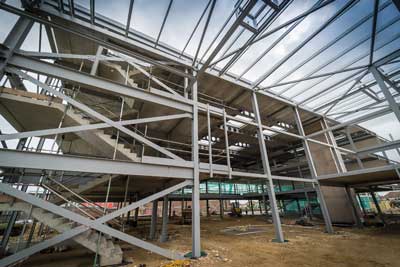 Stability for the frame is derived from cross bracing

BAM Construction started on this site during April this year and is scheduled to complete the project in May 2020.

As well as building the new school, BAM will also demolish most of the existing buildings, once the students and staff have decamped, and convert that plot into new sports fields.

However, two buildings on the site will not be demolished and will remain as part of the new school; the stand-alone sixth form college and a music block. The retention of the latter building has necessitated BAM to enlarge an adjacent toilet block.

The new school building is one large U-shaped steel frame, partially enclosing a landscaped garden. The steelwork gains its stability from cross bracing, either located in stairwells or in partition walls.

Overall the structure and its two outer wings are 81m-long, with the back of the U-shape building having a width of 69m.

“It’s also a tried and tested form of construction for BAM, as we’ve done a number of similar schemes.”

BAM Design Associate Engineer Stuart Hinde agrees and adds: “We have designed a lot of secondary schools over the years and they are predominantly steel-framed.”

“We now have a default design method for these projects, which gives us our starting point, although we do fine tune and constantly review each scheme.”

BAM’s standardised design method allows each project to get an early start and work to a regular kit of components. All of this helps with procurement of materials and the speed of the overall programme.

This design methodology also lends itself to secondary school projects as they are invariably similar, although the layout of certain facilities will always change depending on the location and the architectural intent.

“Our classroom layout of the English Martyrs School is typical of our standardised design, with each wing containing two rows of classes separated by a centrally-positioned corridor,” adds Mr Hinde.

“Our design fine tuning has led to us using a 7.2 × 7.86m grid pattern which we now consider to be the most efficient position for column spacings.”

Each classroom space has enough room for all of its intended components but, if a larger space is needed in the future, the steel design has in-built flexibility as partition walls can be removed without having to remove a column.

The school’s steelwork supports precast planks to form its floors and roof. This method is considered by BAM to offer a quick final product, even though a concrete screed topping must always be added.

The underside of the planks are left exposed within the ceilings of the completed classrooms, and the few services that do run through the rooms are also exposed and hung beneath the steel beams.

Most of the steel frame incorporates two storeys, apart from three large open-plan areas; a sports hall and two multi-functional halls next to the main entrance.

In these areas, precast planks have not been used as a lightweight metal decked roof has been installed, which is considered to be a more efficient method when dealing with longer spans.

In the open-plan areas, which rise uninterruptedly to the building’s full height and are mostly grouped towards the back of the U-shape, Westok cellular beams have been used to form the spans.

The spans in the sports hall are 18.5m long, while the other two halls feature even longer spans of 21m.

The project is on schedule and has escaped any major hiccups, although working next to a functioning school can throw up a few challenges.

“When we began our works the school was just starting its exam process and the sports hall where most are held is right next to our site,” says Mr Kelly.

“We had to be mindful of their exam times and, consequently, when we could operate plant equipment such as the piling rigs.”

The new school building is founded on a series of CFA piles which have been installed to a depth of 17m.

Once the site, which was previously occupied by sports fields, had been piled, the steelwork erection programme was able to begin in June, with the majority of this work completed during the school summer holidays.

Steelwork contractor for the English Martyrs School project was Harry Marsh [Engineers] and it is now working with BAM on the second school in Hartlepool, High Tunstall College of Science.