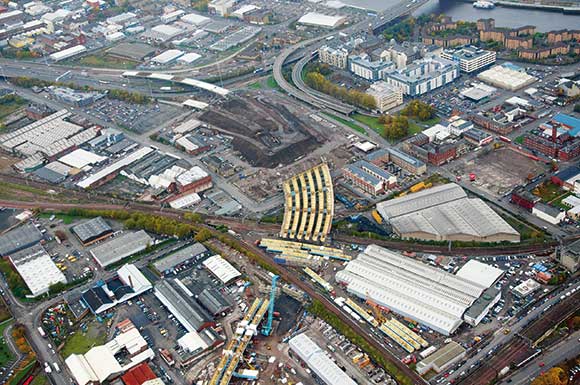 At 750m long the Port Eglinton Viaduct is the longest bridge on Glasgow’s M74 Completion project. Crossing some of the city’s busiest roads and rail lines, the structure’s longest span will require a launching procedure to erect it over the West Coast Main Line.

Requiring approximately 14,500 tonnes of steel, the Port Eglinton Viaduct is a huge structure that will form an integral element of Glasgow’s M74 Completion project. With 12 spans of varying length, the bridge not only crosses Eglinton Street one of the busiest roads into the city centre, but also the West Coast Mainline, the SPT Underground tunnels near West Street Station as well as the Paisley, and City & Union rail lines. It also passes through a very busy trading area where access for businesses has to be maintained and disruption kept to a minimum. 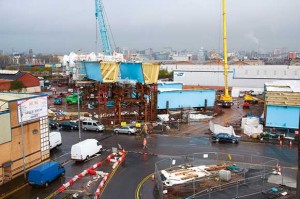 Constructing a bridge over all these vital transport arteries has required a huge amount of coordination between the project team members, the client and importantly Network Rail and Glasgow Councils traffic division.

Stephen Osborne, Project Manager for Cleveland Bridge says: “Our aim is not just to build and erect this bridge but also to cause as little disruption to these vital transport links as possible. By using steel we are able to erect the bridge, along with the necessary formwork and edge protection, overnight and quickly.”

Working on behalf of the Interlink JV, Cleveland Bridge has been contracted to fabricate and erect the four main steel bridges for the project, which consist from west to east, the 232m-long M8 Eastbound Link Bridge, the 750m-long Port Eglinton Viaduct, the 186m-long Rutherglen Station Bridge and the Auchenshuggle Bridge across the River Clyde which will be 90m long.

Structural engineer for the project is a Jacobs/Atkins joint venture and it says steel was chosen for the major bridges because of economics and ease of construction. The structures span busy roads and railway lines and the client wanted to limit the time of possessions and closures. Steel bridge girders assembled off-site can be lifted into place overnight and thereby keep disruption to the general public to a minimum. 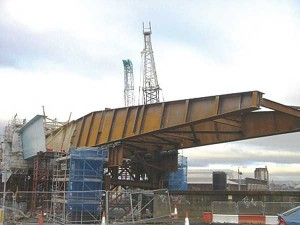 assembled close to the erection points at designated assembly yards. For the five spans already erected towards the end of last year, steel sections were delivered and pre-assembled into 30 girders each ranging from 50m to 70m long and weighing up to 200t.

Once the girders had been pre-assembled they were transported to the erection cranes – a distance of some 100m – by multi-axle trailers and were each individually lifted into position during a series of night time rail and road possessions.

Lifting these huge steel girders into place required months of planning and the use of the UK’s largest mobile crane, a 1,200t capacity Gottwald AK-680, which needed over 30 trucks to deliver it to site. 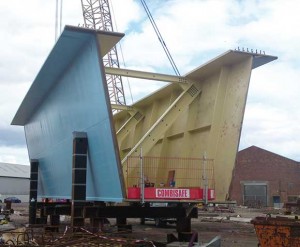 Box girder being assembled in one of the project’s yards

The westbound section of bridge was pre-assembled over the last five months from 22 individual box girders. Each box girder is 4.5m deep, nearly 6m wide with an average length of 20m and weighing around 100t. These large girders had to be delivered to site in halves due to transport restrictions in the area. Once on site they were welded together to form a full open top box girder and then lifted onto 10m high temporary trestles, where further welding took place to join them all together to form a 200m long bridge section.

This section that spans the West Coast Main Line has its concrete deck constructed prior to launching so that work over the railway is kept to a minimum.  The assembly of the launch was a logistical challenge due to the size of the girders, volume of materials and plant required to work in a very small area within a busy trading estate.

The weight of steel plus the concrete deck produces a launch weight of approximately 4,500t. Nearly 1,000t of temporary steel support trestles and ancillary temporary works were designed and fabricated specifically for the assembly and launching operation.

The 4,500t structure will be slid into position by two 418t capacity strand jacks while supported on a series of temporary trestles. For control purposes, one strand jack pulls and one restrains the structure. Slide friction is overcome by using a series of 400t capacity rollers which are located on the top of the support trestles. Due to the geometry and stiffness of the structure, the rollers are supported on hydraulically linked flat jacks in order to equalise and balance the loads in the support system which ensures the equipment is not overloaded.

“This method of launch control offers a very smooth, safe, sliding operation which can be controlled to within millimeters,” explains Mr Osborne. “But what makes this launch different is that the structure is on a plan curve. We will have a series of rollers to guide the structure around the curve as it launches forward.”

The structure will launch forward at a rate of approximately 10m per hour. With only two hour possessions permitted on the West Coast Main Line, the launch will take around 10 nights to complete.

“With a span of this length, size, weight and the access restrictions around the railway there was no real alternative than to pre-assemble the deck away from the railway and launch it,” explains Mr Osborne. “This way the disruption to the railway has been significantly reduced to only a handful of night time possessions.”