June 14, 2018 by NSC2 in Projects and Features, This month's featured stories 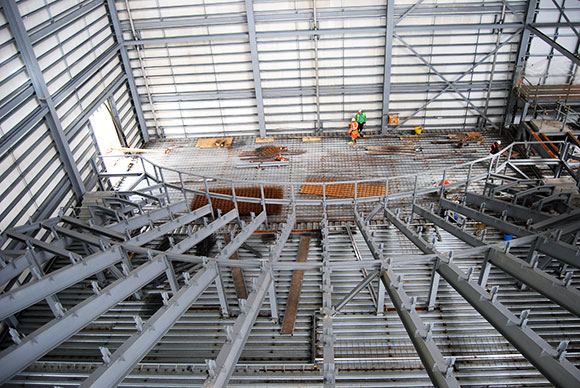 Phase 2 of the Rushden Lakes development is under way as steelwork erection nears completion on a 14-screen cinema block, and further restaurant and retail units.

Set within a Site of Special Scientific Interest (SSSI), the Rushden Lakes development is centred around a series of man-made and natural lakes in the Nene Valley, Northamptonshire, and includes 30 retail outlets, a visitor centre as well as lakeside restaurants and a boathouse providing aquatic craft for hire.

Adjoining phase one of the scheme (see NSC November 2016) which opened last year, a second phase of construction is under way and consists of a 14-screen cinema block with ground floor leisure outlets, an attached 120m-long two-storey western restaurant and leisure terrace that overlooks a lake, and a fourth retail block (Block D).

Steel construction was successfully employed for the first phase retail zones. This has led the project team to use steel once again for its second phase.

The steel-framed 28m-high cinema block contains an IMAX screen and 13 other smaller screens, all housed at first floor level. Ground floor has the main entrance lobby and a number of leisure outlets, including an indoor climbing zone.

Structurally the cinema block is a large braced box, stabilised with cross bracing located in cores, stairwells, walls and in the roof steelwork. 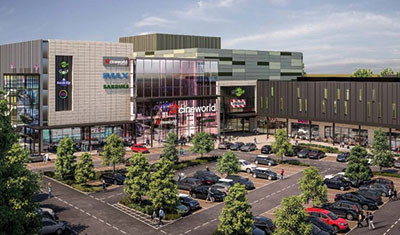 Having 14 screens all sat within one large building and on top of leisure facilities has meant a lot of design work was necessary to stop noise permeating between the various zones. To mitigate against this the cinema screen’s steelwork includes acoustic isolation pads.

“There are between 30 and 40 connections per screen within the main cinema frame that needed acoustic isolation packs,” explains Caunton Engineering Project Engineer Chris Duff.

These connections are either located where beams connect to perimeter walls or in partitions between individual cinema screens.

“The pads also completely isolate the ground floor steelwork from the first floor, which is why some of the columns are spliced at this level with pads inserted between the two members,” adds Mr Duff.

All of the cinema screens are open-plan column-free spaces with the IMAX being the largest and measuring 24m × 27m. A series of spliced rafters form the roof as well as a plant deck over this screen.

Using up to four mobile cranes – with capacities of between 50t and 80t – at any one time, Caunton Engineering started the erection programme with retail Block D, which is located on the opposite eastern end of the development.

Steel erection then moved on to the IMAX screen. This part of the cinema building reaches the maximum 28m height, while the remainder of the block is 22m-high.

“We then erected the rest of the cinema block working in a north to south direction before turning our attention to the long restaurant block,” explains Caunton Engineering Contracts Manager Adrian Downing.

The two-storey restaurant and leisure block is separated from the cinema by a movement joint, and halfway along its length it has a slight kink, mimicking the adjacent lake’s shoreline. 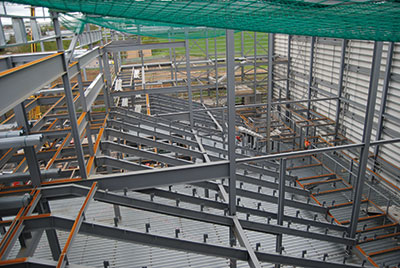 The cinema screens all vary in size 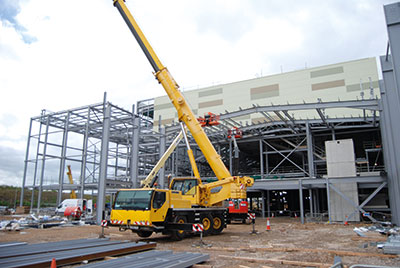 Steel erection begins on the 120m-long restaurant and leisure block

This 14m-high building is a portal frame formed with a series of 26m-long rafters spliced at midpoint. The building features a mezzanine level that accommodates further leisure facilities within an open-plan column-free zone.

Below, at the ground floor restaurant level, there are two internal column lines supporting the mezzanine floor.

“The reason the first floor has been designed as a mezzanine is because it allowed us to have a very shallow floor depth, giving us the maximum possible headroom for the leisure floor,” says Mr Duff.

Floor-to-ceiling height is important as the upper floor will house an indoor trampoline facility. Vibrations exerted by this activity have been taken into account and the steel mezzanine has been designed to 8Hz instead of the more usual 4Hz.

Caunton Engineering completed the main steelwork programme in May, but will return later this month (June) to complete cold rolled steel stairs in the cinema.

It will also erect 5m-high canopies alongside the restaurants, once the cladding has been installed, and erect plant decks to the roofs of this two-storey block.

Winvic Construction Director Danny Nelson says: “When steelwork is going up and buildings become more than drawings, it is an exciting stage for any project.

“Rushden Lakes is a landmark development in the UK, for its size and modern take on how people will interact in a retail and leisure space. Therefore, we were thrilled to have been contracted by LXB and The Crown Estate to drive this second phase for them, following the success of the first.

“Many challenges that come with such a significant project have to come to the fore, and these include the creation of piled retaining walls by the lake, extensive work to accommodate new traffic flow and moving 25,000m³ of earth for flood alleviation measures.”

Summing up, LXB Retail Principal, Jon McCarthy adds: “Winvic’s delivery of Phase 1 went extremely smoothly and the company’s experience and commitment to managing a project of this scale, with the challenges it brings, was evident from the start. LXB is therefore thrilled that the partnership with Winvic is continuing on Rushden Lakes Phase 2 and the units are already evolving at pace.”