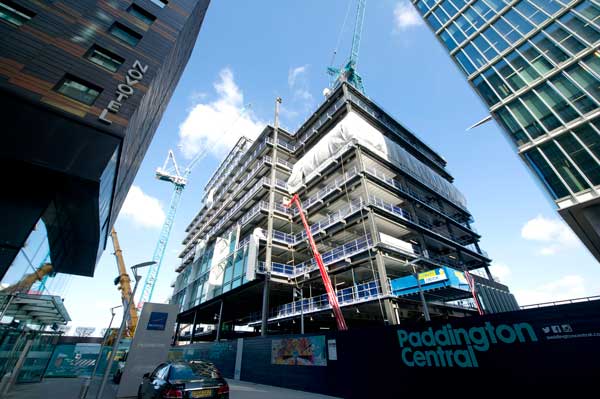 One of the final structures within the 11-acre Paddington Central mixed-use campus is currently under construction with steelwork playing a crucial role. Martin Cooper reports.

4 Kingdom Street is a 13,500m² nine-storey steel-framed office building being built on the second to last vacant plot within the campus.

Following its acquisition of the Paddington Central campus in July 2013, British Land appointed architects Allies and Morrison to review and update the design of 4 Kingdom Street, which had originally been granted planning consent in 2010.

In 2014, Westminster City Council approved changes to the scheme, which retained the consented bulk and massing, while providing increased flexibility to the office floorplates along with improved amenities for occupiers.

The re-designed building now has typical floorplates of 1,405m².

The core of the building has been relocated to maximise space and efficiency, creating more flexible floorplates and greater optionality for occupiers. The building also includes a communal roof terrace, which provides outside space for breakout, entertaining and sporting facilities. 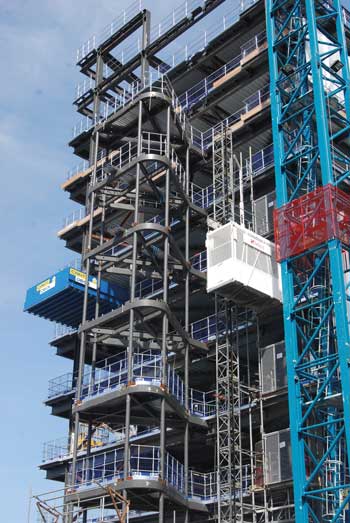 Meeting room pods are attached to each floor 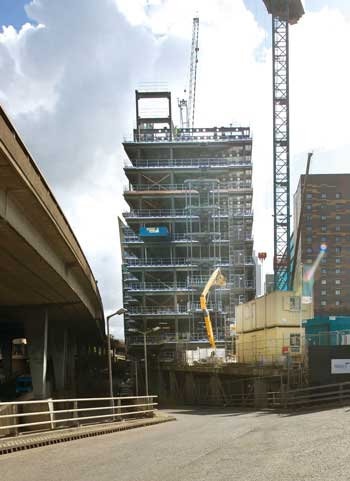 A service road separates the building from the busy Westway 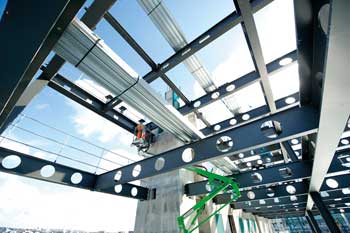 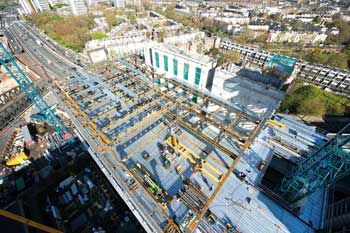 With the redesign taken on board, main contractor Wates Construction started on site in June last year.

The building sits atop a steel-framed podium deck that dates back to 2004 [see box]. Utilising this existing structure meant preliminary works were minimal and the superstructure began to be erected early in the construction programme.

Using the same 12m × 12m grid pattern as the podium has created clear column-free internal spans. Fabsec cellular beams, up to 600mm deep, have been used throughout the building to accommodate services.

Structural stability for the building’s steel frame is provided by the large slip-formed core, along with the diaphragm action of the composite flooring, which consists of metal decking and a concrete topping.

“The building features quite a lot of exposed steelwork in the offices and public spaces, which is an architectural nod towards the nearby historical Brunel structures,” says Allies & Morrison Associate Director Hayden French.

Each floor has a large corner terrace and a glass pod designed as a creative meeting space. Both of these standout features incorporate exposed steel and detailing, with the corner terraces also presenting the team with an installation challenge.

As they sit outside of the building’s cladding the corner terraces, which measure 12m × 4.5m, will be installed after the main frame is completed. They will be brought to site in two completed sections that will be welded together on the ground before being lifted into place.

The steel-framed pods are a separate nine-storey structure that is bolted to the western elevation. Initially designed as a fire escape, it was redesigned as a flexible space, offering each floor a meeting room or separate breakout office space.

“Their flexibility is further enhanced by the fact that a connecting staircase can be added between pods if a client takes two floors, thereby gaining a private internal stair,” adds Mr French.

The pod structure is formed by a series of ring beams connecting to circular columns creating the complex steel space.

Working on behalf of main contractor Wates Construction, steelwork contractor William Hare completed its entire steel erection package, that also included the installation of metal decking, at the end of May.

“We erected the majority of the steelwork using the on site tower crane,” says William Hare Senior Site Supervisor Kris Garnett. “However there are a couple of large trusses on the podium deck level that required us to bring a large 360t-capacity mobile crane to site,”

“The area around the site is very constrained by the nearby railway lines and the elevated section of the A4. We had to position the mobile crane in the service road as it was the only place,” adds Mr Garnett.

The trusses in question measure 15m long × 4m deep and both weigh 30t. They support a 4.5m-deep cantilever along the building’s northern elevation that partially spans a service road. As columns in this area do not align, the trusses bring the loads back into the main steel frame.

Summing up the project, Wates Construction Project Manager Duane McCreadie says: “Logistics are the main challenge on this job, especially with the proximity of the ongoing Crossrail works and the busy Paddington Station adjacent to our site.”

“Having a steel designed building has enabled us to minimise deliveries and the amount of on site craneage,”
4 Kingdom Street is scheduled for completion by Spring 2017.

Designed in 2003 when the Paddington Central campus was established, the Kingdom Street podium deck was constructed through 2004 and completed the following year.

Supporting four buildings, including 4 Kingdom Street, the podium was designed to allow the Crossrail project to proceed under the podium while construction of the campus could continue simultaneously above.

The steel-framed podium is formed with steel columns spaced around a 12m grid pattern. This supports a 400mm deep slab, which has encased steel beams within its depth for extra strength.

“The grid pattern would allow train lines and sidings to pass within its spans,” explains Ramboll Project Engineer Mark Drew. “Crossrail had originally planned to take muck away from their Paddington tunneling works via trains located beneath the podium. However, this work was then relocated and they’ve subsequently used the space beneath the podium for storage and temporary offices.”

Because of its anticipated use, the podium has a sturdy design with plenty of impact resistance, such as concrete encased steel columns.

“It was designed to accommodate a building at 4 Kingdom Street’s location with a notional height of nine storeys,” sums up Mr Drew.