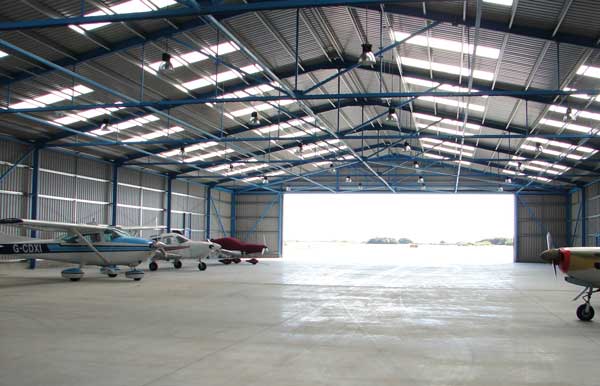 The hangar is already in use

As part of a much wider development plan, a new steel-framed hangar has been completed at London Ashford Airport.

Now plans are afoot for further developments, primarily driven by a rise in demand for more business and general aviation facilities. This has led the Airport to start preparations for a runway extension and construct a new hangar.

A team led by Civils Contracting with REIDsteel designing, fabricating and erecting the steelwork has recently completed the 2,100m² steel-framed hangar, which measures 29m by 73m. These two companies have worked together on a number of airport hangar projects, including Bournemouth [see NSC May/June 2014].

“This £700,000 investment underlines our determination to ensure that the airport is able to meet the needs and expectations of the growing number of aviation businesses and customers who use Lydd,” said an LAA spokesperson. 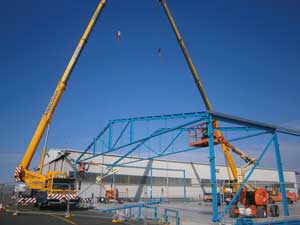 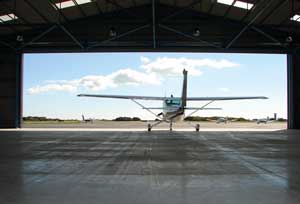 Getting ready for takeoff

Built alongside the airport’s existing hangars, the new structure was completed on schedule after a 19 week programme.

The preliminary works paved the way for REIDsteel to begin its steel erection programme, which was completed by one gang of erectors using mobile cranes.

“The hangar has a slightly unusual design because it has sliding doors at either end; the majority of modern hangars only have doors at one end,” says REIDsteel Project Engineer Richard Hanson.

“So with little or no room for gable end bracing, the best and most economic design solution was for a REIDsteel patented Archspan frame.”

As the doors are 20m-wide, there is room for a 4.5m braced bay located at both ends of the hangar either side of the door openings.

With an Archspan frame there is less thrust to deal with, the frame needs less steel, saving the client money, and the lightweight frame requires shallower foundations.

The upper elements of the Archspan frame, or rafters, are simple UB members, the horizontal ties are structural Tees cut from 178 UBs, while the bracings are square hollow box sections.

The triangular Archspan frames reach a maximum depth of 3m to form the hangar’s central ridge. Because of their length, they were brought to site as individual steel members and then assembled on the ground before being lifted into position.

Using temporary bracing to stabilise the initial columns and frames, the hangar was erected sequentially, with the structure stabilising itself once the first bay was erected. Two mobile cranes were needed for the first bay’s steelwork, while thereafter the erection process was completed by a solitary mobile crane.

The hangar doors are steel frames measuring 5m wide by 5.7m high and once delivered to site their tracks and guides were added before being lifted into place.

“Each door leaf opens into cantilever outriggers that allows both sets of sliding doors to open to the maximum 20m width,” explains Mr Hanson.

REIDsteel completed its programme in 10 weeks. In addition to the main steel frame, the company also clad the roof and walls in Euroclad’s trapezoidal profile cladding and installed the manually-operated hangar doors.

“Due to REIDsteel’s unique capability to design and make the hangar doors as well as the steel frame and building envelope, the whole process is seamless. There is no hiatus in the construction process and no divided responsibilities between different trades, which gives clients and contractors the peace of mind that their project will run to schedule,” says Mr Hanson.

After the successful completion of the project, the hangar was handed over by Civils Contracting to LAA on 16 September. 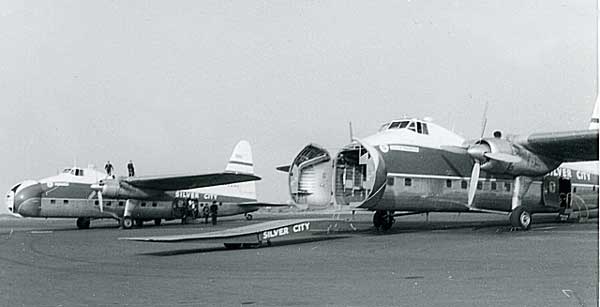 Originally known as Lydd Ferryfield Airport, the facility opened in 1954 and was the first airport to be built in the UK following the end of the Second World War.

It was built for Silver City Airways and used initially for car carrying air ferry services using Bristol Freighters, operating principally to Le Touquet in France. Within five years of opening, it was handling over 250,000 passengers annually, making it one of the busiest airports in the UK.

During the 1980s the airport was bought by Hards Travel from Solihull, who used the airport (along with Coventry Airport) as its base for its holiday operations to Spain, Italy and Austria, using Dart Herald and Viscount aircraft flying to Beauvais in France, where customers were transferred to coaches for the remainder of the journey.

Expansion of the airport was approved in 2014, following a legal challenge by Royal Society for the Protection of Birds (RSPB) and the Lydd Airport Action (LAAG) Group. The expansion includes a runway extension of almost 300m and a new terminal building.