Kelpies give the nod to steel

November 25, 2013 by NSC in Projects and Features, This month's featured stories 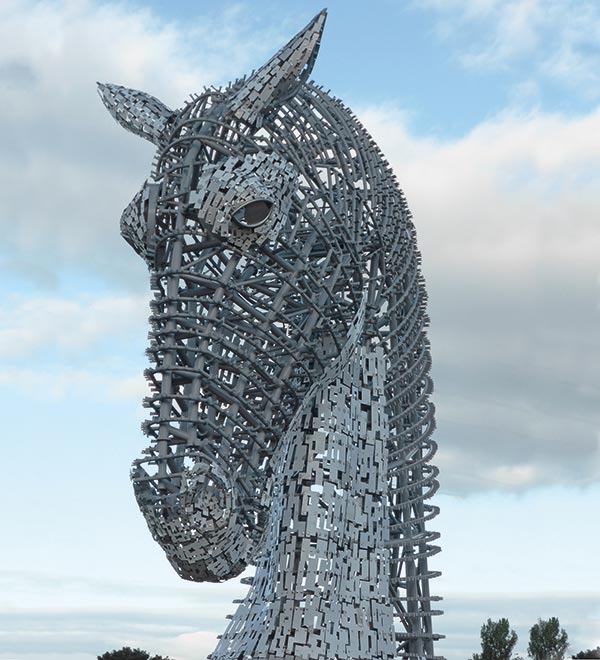 Regular road users of the M9 motorway will have noticed that two 30m high steel horse head sculptures have been taking shape over the last few months, close to junction 6 at Falkirk.

Not a regular occurrence by any stretch of the imagination, but these sculptures – called The Kelpies – are signposting one of Scotland’s newest visitor attractions.

Known as the Helix project, a swathe of land between Falkirk and Grangemouth is being transformed into a vibrant park with its own lagoon, outdoor events space, and a new turning pool and lock for canal boats.

The Forth & Clyde canal joins the River Carron within the parkland but navigation is problematical due to a low bridge carrying the M9 motorway. A new lock and canal link, flanked and signposted by The Kelpies, will provide boats with an alternative route. 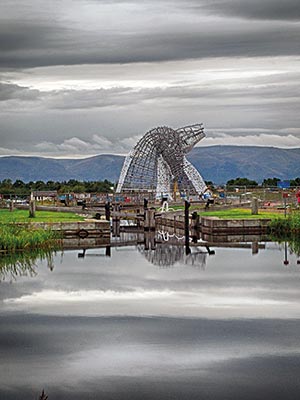 Located within a parkland setting, the Kelpies are set to become a major tourist attraction 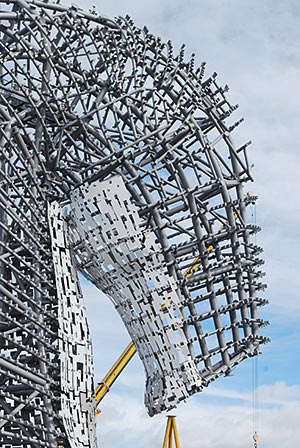 Each head is formed from more than 13,000 invididual steel pieces 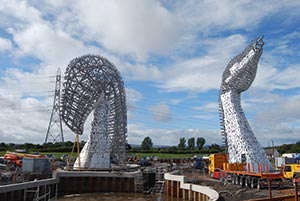 The heads are located either side of a new canal lock

Construction work on Helix Park began in 2011 and much of it is now open to the public. The Kelpies project, which includes canal works and a visitor centre, is one of the final elements of the scheme.

All of the steel fabrication and assembly was carried out at S H Structures’ facility in North Yorkshire. Having sourced the necessary tubular steel from Tata Steel mills at Hartlepool and Corby, the sections were bent to the required shapes by Angle Ring before being shotblasted and coated with a four-coat protective coating system by Jack Tighe.

“We fabricated much of the steelwork offsite and brought it to Falkirk in the largest transportable sizes,” explains Tim Burton, S H Structures Sales and Marketing Manager.

The internal structure has two elements, a primary main frame made up of tubular trusses and assembled frames that weigh up to 10t and have maximum measurements of 4.5m wide × 12m long. Outside of this there is a secondary steel structure that follows the profile of the internal surface and supports brackets to take the stainless steel cladding which forms the outer skin of the two heads.

As individual pieces were fabricated they were joined together to form larger sub-assemblies. It was impractical to trial erect both complete heads, but each interfacing frame was matched to ensure a first time fit could be achieved on site.

As the bulk of the fabricated steelwork had been stored close to the site the lifting of the first sections started immediately. Due to the detailed modelling process, accurate shop fabrication and trial assembly, the structure went up quickly.

The various elements were predominantly bolted together with some welding on site required, although the design process ensured this was kept to an absolute minimum. Primary trusses rapidly took shape and very soon the secondary steelwork was being added.

Using computer software, S H Structures was able to locate the optimum lifting points and determine the correct sling lengths for these complex shapes. This was invaluable to the site team as physically locating these points on site would have proven to be near impossible.

Early in the design process Andy Scott, Project Sculptor had produced a pair of tenth scale models to provide the team with something physical to work from. Once the steel frame had been modelled one of the biggest challenges was scaling up the method of creating the skin cladding.

The skins of the models were created by carefully welding together hundreds of individual small plates. Creating something ten times this size needed a different approach. Structural engineer Atkins solution was to clad the heads with much larger 6mm thick panels that were then profiled by laser to appear like a number of smaller plates when viewed from a distance.

The Kelpies along with the associated landscaping and canal works are due to be officially opened in April 2014. As Mike King, Helix Trust Programme Director says: “The project will dramatically transform an area of under used land and will become a superb visitor attraction for the benefit of Scotland.” 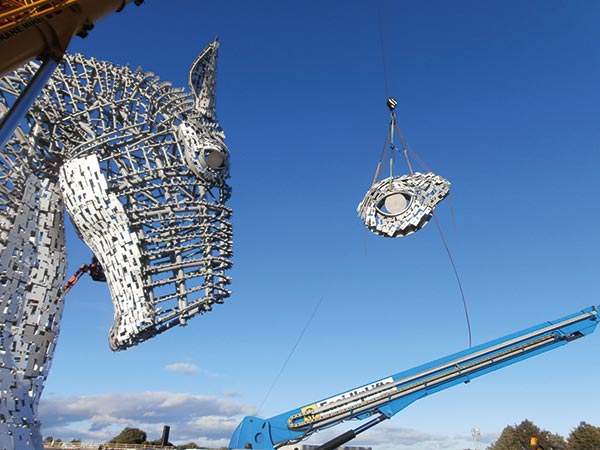 A prefabricated eye is lifted into place

Sculptor Andy Scott was commissioned by the Helix Trust to design an artwork that would reflect the scale and scope of the project. His choice of two steel framed equine heads initially had mythical associations, Kelpies being supernatural water horses of Celtic folklore, but as the project developed his inspiration came from heavy working horses such as Clydesdales.

He has a long standing connection with steel and it is invariably his material of choice for artworks. Normally he undertakes the manufacture of his pieces himself, but producing two 30m high sculptures needed a more collaborative approach with the structural engineer and steelwork contractor.

SKM and S H Structures together value engineered the original design and came up with a revised concept that brought savings of around £750,000. The new design replaced horizontal plate members with tubular steelwork, meaning the entire internal primary frame is fabricated from 323 x10 CHS Celsius® tubes.

The project team produced a Kelpies BIM model that was used to exchange information between the consultants, the checking engineers, the cost consultants and Andy Scott.

Once the primary frame was modelled the secondary steelwork was added, which consists of smaller 139 × 5 CHS Celsius®  tubes and supports the stainless steel skin cladding. After the model was completed nearly 2,000 individual fabrication drawings were produced.