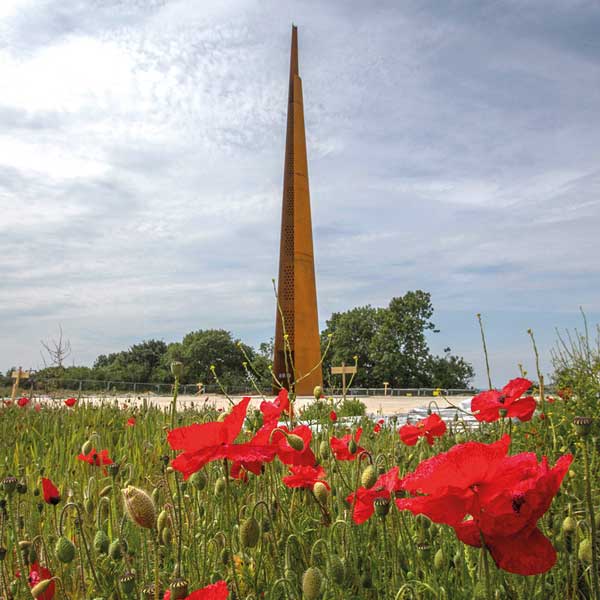 A 31m-high weathering steel spire forms the centrepiece of a memorial to those who served with Bomber Command.

The area’s flat topography has very few obvious landmarks with the exception of church spires and towers. To this end, Lincoln Cathedral provided an important marker for crews both leaving and returning from missions.

With this in mind it is fitting that, in recognition and remembrance of those that served in the Royal Air Force during the War, the International Bomber Command Centre is being constructed on an escarpment overlooking Lincoln.

Because of the hilltop location, the principal element of the Centre – the 31m-high weathering steel Memorial Spire – is visible for miles around and from many sites within Lincoln itself. 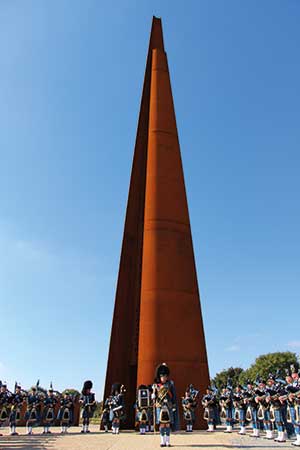 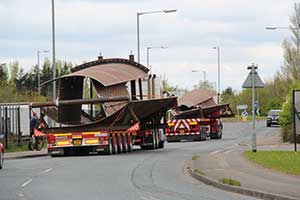 Spire sections take to the road on their way to Lincolnshire

Place Architecture won the design competition for the Spire and Project Architect Stephen Palmer says the brief was for a contemporary memorial.

The steel structure is said to represent wing fragments with its height being the overall wingspan of a Lancaster Bomber with its base, at 5m wide the same width as a Lancaster’s wing.

“By using weathering steel we fulfilled the brief, but we also created a multi-layered sculpture that references flight, aircraft manufacture and is also a nod to nearby Lincoln Cathedral,” says Mr Palmer.

The structure was fabricated and installed by S H Structures from 32 weathering steel plates. Perforated panels, again reflecting the engineering principles used in airframe construction connect the rolled external plates. Built in jigs to maintain the shape during welding the structure was fabricated in two sections – upper and lower parts – with sacrificial lifting frames to aid installation.

The two completed spire assemblies were shotblasted by Jack Tighe of Scunthorpe after manufacture. This ensured all fabrication marks were removed and the process allowed an even patina to form on the steel once it was exposed to the elements.

The spire is surrounded by memorial walls (right) that record the names of the 25,296 aircrew that lost their lives flying with Bomber Command while serving in 1 and 5 Groups that were headquartered in Lincolnshire. These walls or panels, arranged around the Spire in concentric circles, are made from curved 20mm thick weathering steel plate. Welded on to these plates are 4mm thick steel panels with the airmen’s names laser-cut into them. 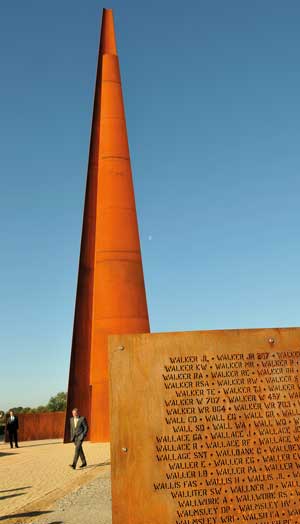 “It is a great privilege to work on projects like this and contribute to what will undoubtedly become a lasting legacy to the memory of those who gave their lives serving in Bomber Command,” says S H Structures Sales and Marketing Manager Tim Burton.

“We were fortunate enough to be visited by one of the surviving veterans during our involvement in the scheme. Ex- Flight Lieutenant RAFVR Roy Hill arrived with his wife and daughter on the morning we were loading out the completed sections of the spire. Roy was kind enough to relate some of his experiences during his visit and it really brought home the significance of the project.”

International Bomber Command Centre Project Director Nicky Barr comments: “The Memorial Spire dominates the skyline as a fitting tribute to the efforts of all in Bomber Command, both who lost their lives and those who survived.”

The Memorial Spire was officially unveiled last October and represents the first phase of the International Bomber Command Centre.

As well as Memorial Gardens, the scheme will also contain a visitor centre (known as the Chadwick Centre) comprising an exhibition hall that will tell the story of Bomber Command through a multi-media experience, an education facility and a comprehensive multi-layered digital archive.

These facilities will be housed in a two-storey 13,000m² steel-framed structure that is due to be constructed later this year.