May 9, 2019 by NSC in Projects and Features, This month's featured stories 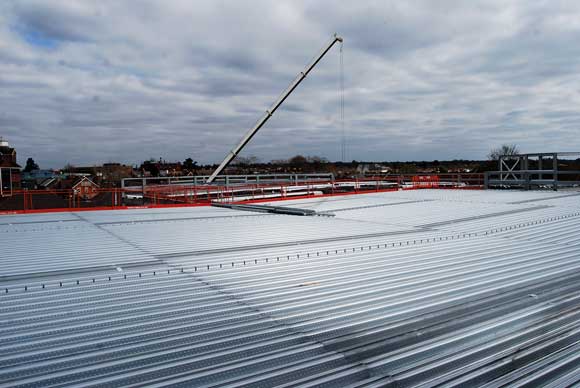 Two steel-framed car parks in Sussex are forming integral elements of large developments that will reshape a town centre and a university campus.

Including a three-screen Everyman cinema, a Premier Inn hotel and a range of new restaurants and retail outlets, the scheme also includes a distinctive five-level multi-storey car park.

Meanwhile, forming one of the initial parts of the University of Brighton’s expansion programme for its Moulescoomb campus, a new multi-storey car park is under construction that will provide 550 spaces for staff and visitors on six-levels (see below).

According to main contractor Kier, the delivery of the car parks has involved some successful partnering with the company’s subcontractors.

“No partnering works effectively without trust and honesty from all parties and it is vital to honour these agreements made in the early stages of a project,” says Kier Construction Design Manager Charley Latimer.

“When Horsham District Council and University of Brighton invited Kier to tender for their respective new car parks, it was evident that the best way forward was a steel-framed and metal deck solution and to bring in Caunton Engineering as part of our bid proposals.” 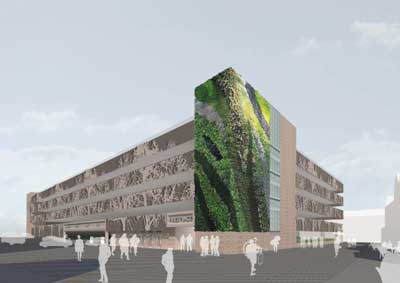 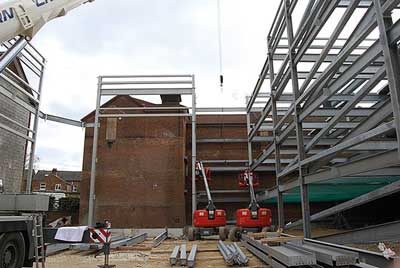 The Horsham car park was erected in a very confined site

As part of the bids, Kier and Caunton put together some options for the clients to review. According to Kier, Caunton’s design team rose to the challenge and turned around a full 3D model with circulation and bays identified in less than 48 hours.

This collaborative early engagement demonstrated to the respective clients that both Kier and Caunton understood their needs and were fully committed to providing a high level of service and collaboration.

HNW Architects Director Steve Duffy adds: “Agreeing a set of design principles for all disciplines, including the main contractor, to develop at the very earliest stage is a great example of design and build, which relies on involving key design partners from the start.”

Initially, a reinforced concrete design was the option for the car park, but this did not provide Horsham with the right solution for the varying bay sizes needed and did not fall within their budget.

“A steel frame provided a lightweight and relatively quicker option in comparison with a concrete frame structure. The reduced weight of the superstructure was also beneficial for the foundation design, especially along two elevations where due to the close proximity of existing foundations, cantilever RC pile caps were designed to support steel columns above,” explains Gyoury Self Project Engineer Monika Koclega.

A steel-framed solution also offered a much greater ability to accommodate the desired long clear spans and minimise column sizes, which resulted in a more aesthetically pleasing and user-friendly car park.

The structure is generally based around a column grid pattern of 8.5m × 15.6m, with a centrally-positioned vehicular ramp.

The floors are formed with steel beams supporting steel decking and a concrete topping.

Steel decking provided a more flexible option to suit the existing site constraints, as the new Piries Place car park was designed to fit around some existing residential buildings.

“A steel decking option with 150mm deep concrete slabs was considered to be a cost and time-effective solution in comparison to precast flooring, as well as providing a cleaner soffit,” says Ms Koclega.

The main floor beams for the longer spans are 610mm × 229mm cambered UB sections, while the shorter 8.5m-long beams are 457 UBs. All of the project’s columns are either 305 or 254 UC sections, which were all brought to site in complete 20m-long sections that required no splice to reach the full height of the car park.

Stability for the structure is provided by vertical bracing in the building’s two lift and stair cores.

Caunton Engineering Contracts Manager, Adrian Downing says: “This is a very tight town centre site and a lot of coordination was needed between trades.” 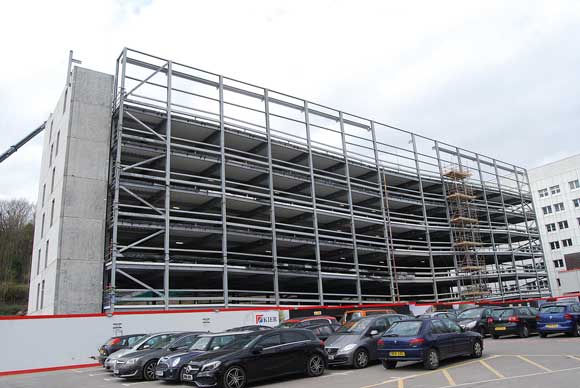 The Brighton car park has a core at either end

It will also be able to accommodate 330 bicycles, while the structure’s ground floor will include showers for cyclists, a parking office and a recycle bin storage area.

Based around a 4.8m x 15.9m column grid pattern, the structure has been designed with cambered 610 x 229 UB sections for the longer spans, and 305 UBs for the shorter spans. Either 305 or 254 columns have been used throughout and these are spliced at the underside of level four.

According Stripe Consulting, the project architect and engineer, speed of construction was one of the main reasons for choosing a steel frame design with metal decked flooring.

There are two lift and stair cores positioned at either end of the structure, but these provide no stability as the car park gains all of its rigidity from braced bays. 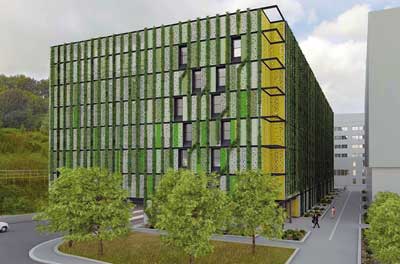 The steel-framed car park has been designed as a Vertical Circulation Module (VCM), which is said to offer a more efficient solution for confined city plots, like the Brighton site. The design contains no external ramps as all of the circulation is via slopes within the floors, which creates more parking spaces.

Caunton has also erected some additional steelwork features to the uppermost level of the car park. This includes a canopy over the central vehicle access route that will prevent rainwater from running down the slope to the covered floors below.

A series of secondary beams has been added to two elevations along the top floor. These members will support planters, which will contain hanging vines that will form architectural living ‘green’ walls.

As well as the car park, the overall University of Brighton scheme, which has been dubbed the ‘Big Build’, will also include five new halls of residence, a new academic building, a new students’ union building and fitness facilities, and a new footbridge over the A270 linking both parts of the campus.