September 1, 2009 by NSC2 in Projects and Features 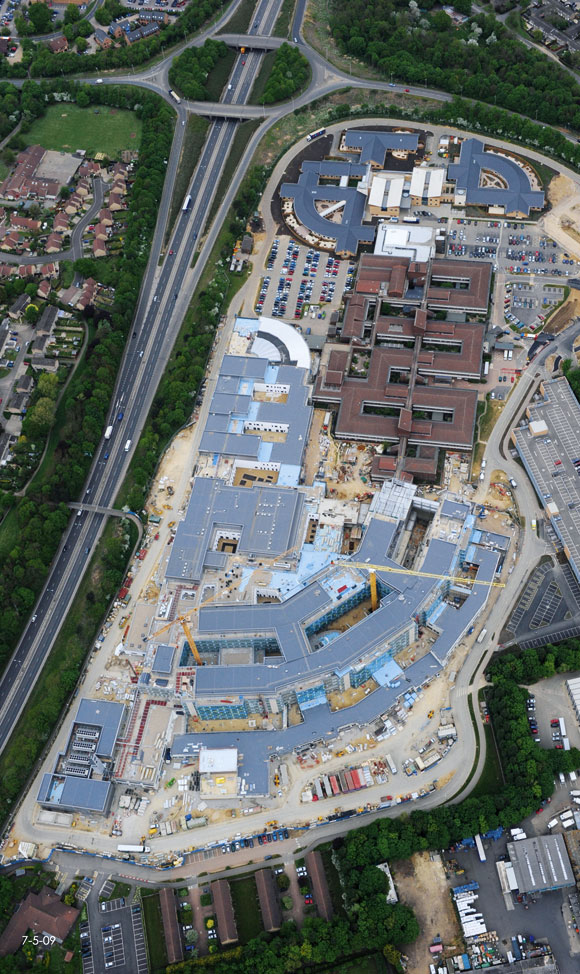 The city of Peterborough will have a new state-of-the-art acute hospital, when the £335M City Hospital project is handed over to the local NHS Trust in late 2010. Construction work on this huge project is currently progressing on schedule with the steel frame now complete and cladding also largely finished. A lengthy and time consuming fit out programme is now under way, although some minor building work is still to be undertaken.The hospital is being built adjacent to the current Edith Cavell Hospital, which will decamp into the new buildings, along with Peterborough District Hospital, once the project is complete. The old hospital will then be demolished and the area landscaped and converted into new car parking as the final phase of the overall scheme.

On the same site is the 102-bed Cavell Centre (see NSC February 2008) which fully opened earlier this year. This includes adult acute, psychiatric intensive care and older people’s units and services for those with learning disabilities, dining areas, staff facilities and garden areas. When both projects are complete the overall site will become known as the Edith Cavell Healthcare Campus.

Construction for the City Hospital began on site in early 2007 with a major groundworks programme being undertaken on the former greenfield site. Steelwork contractor Rowecord Engineering began erecting the main frame in October 2007 and largely completed its work by August 2008.

Last July the project celebrated a momentous milestone when the structure was officially topped-out ahead of schedule. Nigel Hards, NHS Trust Chairman, said: “It has taken a great deal of hard work by the Trust, our PFI partners Progress Health and Brookfield Construction to reach this stage on what is probably Peterborough’s largest building project since the construction of the cathedral some 800 years ago.”

Commenting at the topping out ceremony, Ross Ballingall, Brookfield Construction UK Director responsible for the project, added: “Completion of the frame on such a large project ahead of schedule is a significant achievement. Our trade contractors Rowecord and Buildstone, who did the concrete floor slabs, have worked well with my team and all should be congratulated.”

At its peak Rowecord had 30 trailers of steelwork on site, but as the site is quite confined, surrounded by roads and a functioning hospital, the majority of steelwork was delivered on a just-in-time basis. 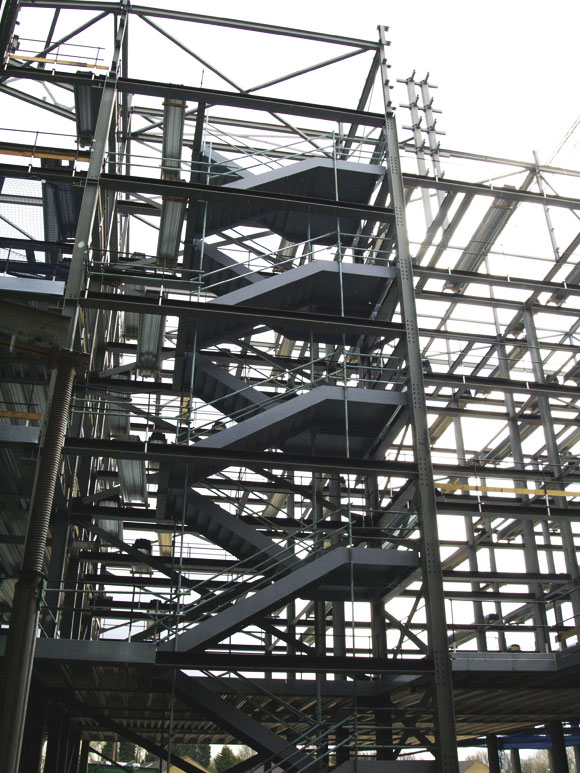 Steelwork going up on the six-level high ward block 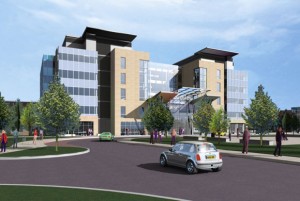 “Although most of the steelwork was finished last year we’ve still had a presence on site over the past 12 months to finish small details and areas where access wasn’t previously available due to other trades working there,” says Colin Davies Contract Manager for Rowecord Engineering. “Some of the last areas to be erected included the main entrance which required a canopy supported on V-shaped tubular columns.”

The build programme was divided into seven zones, which effectively split the one large structure into manageable sized areas. Movement joints have been placed along these zone boundaries with just one line of columns adjacent to the joint.

The steelwork for the entire structure has been based around a constant 7.5m x 7.5m grid with steel braced cores supplying the necessary stability throughout the building.

“Initially the cores were designed in concrete,” explains Mei Xiao Project Manager for Robert Bird & Partners, the structural engineer for the project. “However, the change was made for better sequencing as using steel reduced the amount of formwork on site and allowed the steelwork contractor to erect the cores along with the main frame.”

As the six main braced cores are not centrally located extra stability bracing has also been placed in partition walls.

Changing the design of the cores certainly helped the steelwork erection process as Rowecord’s Technical Director Paul Benwell explains: “Steel braced cores made the design and the erection process easier because there were less interfaces with other materials and consequently the detailing was less tricky.”

Another interesting steel design issue revolved around a building height restriction which in turn impacted on the design of the floor beams. Consequently throughout the project the floor beams are asymmetric members fabricated from plate with unequal top and bottom flanges.

Deep CF225 metal decking was used with shear studs on the top flanges only. Because of this bespoke flooring design a lot of extensive connection design was needed to accommodate the plate girder beams.

“Time consuming detailing work was undertaken for the flooring system which was initially designed by Robert Bird and then checked by Rowecord’s technical department,” explains Ms Xiao.

Vibration can sometimes be an issue on hospital construction, but here again steel played a key role in mitigating any problems. All functional areas of the composite floors were assessed with the methods set out in the Steel Construction Institute (SCI) design guide.

Because of the required fit-out programme and to tie-in with the main contractor’s groundworks scheme, Rowecord began its steelwork erection on the three-storey zone two part of the hospital. The steel erection then advanced onto the main curved ward block which has five levels plus a plant floor which is effectively a sixth floor.

The steelwork sequence required a large amount of temporary works as a two-week cycle was employed. These steel supports had to remain in place until the two floors above had been cast.

The entire hospital structure is broken up by numerous voids which act as atriums allowing natural daylight to penetrate into the central areas of the wards. Some of these atriums are open spaces down to ground floor level, while others will be covered with ETFE roofs.

The design of the ward block follows the rest of the structure’s 7.5m grid pattern, but internally the wards, designed by architect  Nightingale Associates, have been configured to provide a high level of privacy. The patient areas are divided into three separate zones per ward, one seven-bed unit and two 11-bed units. This is said to allow patients with differing needs to be treated in the most appropriate environment.

The ward design also incorporates the new cruciform four-bed bay which the architects say provides better separation between patients and more space for staff to use hoists and other equipment. It also allows the creation of two quiet areas where patients can sit with relatives or have their meals.

Once Rowecord started erecting steel for the main ward building – a 200m-long curved structure with three internal voids – it was able to introduce four erection gangs to the job.

“This area of the job allowed us to work simultaneously in four separate directions,” explains Mr Davies. “Each gang had the use of its own dedicated 55t mobile crane, which had sufficient capacity as none of the beams were heavier than 3t.”

The main ward block is divided into two wings, north and south, with a service tunnel running beneath the later. “The construction of the tunnel meant we had to work in close sequence with the main contractor on this zone,” says Mr Davies. “We obviously couldn’t erect steel while the tunnel was being excavated.”

The final part of the main steel erection, the energy centre, was completed last Spring. This two-storey structure consists of approximately 600t of steelwork and connected to the main part of the hospital at the western sector, although it is separated by a fire protection partition wall.

The first patients will be admitted to the new Peterborough City Hospital in November 2010 with the overall project scheduled for completion in September 2011. 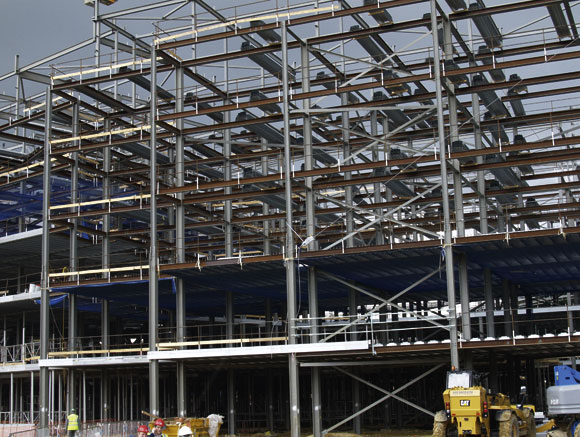 The steel frame was completed ahead of schedule