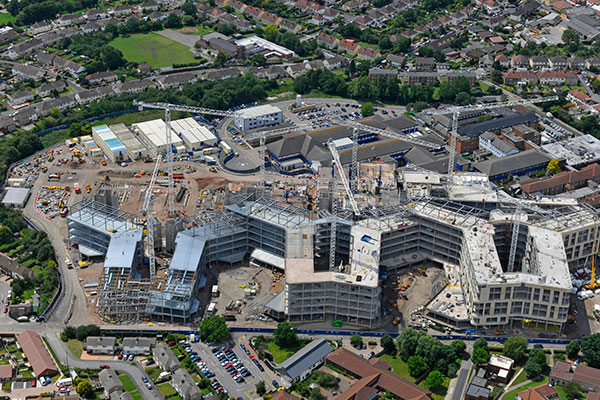 A new 800 bed acute hospital is rapidly taking shape in north Bristol, a project which is making use of more than 6,000t of structural steelwork and aiming to achieve a BREEAM ‘Excellent’ rating.

Southmead Hospital is being constructed in two phases with most works being completed in phase 1.  The main hospital which includes the clinical and ward blocks is programmed to complete at the end of March 2014 after which the new hospital will open.  The second phase picks up the remaining elements including external works and landscape and will be complete towards the end of 2015.

Structurally the new main building is split in two, with a concrete framed clinical block containing operating theatres, medical rooms and the emergency department separated from a steel framed ward block by a large steel framed and glazed atrium / concourse.

Both the clinical and ward block are subdivided into thirds, with two movement joints positioned along the structure’s length. For the steel framed ward building the movement joints connect to the structure’s three concrete cores. Due to space constraints, the usual double column movement joint configuration could not be employed and steelwork contractor Severfield-Reeve Structures has installed a single beam with a sliding joint.

The ward block’s frame is a beam and column structure supporting profiled metal decking with concrete infilled floors designed compositely with the floor beams. Loads are transferred vertically down the columns which are supported on pad foundations or piles.