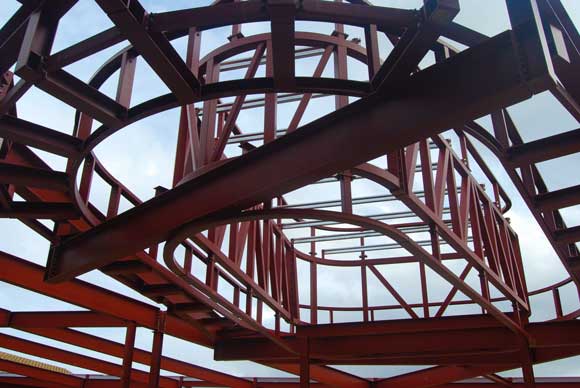 One pod is suspended via cantilevering beams

Constructed primarily with structural steelwork, the new educational facility is not only being built on a site easily accessible from all over the city, but one with a long military history.

During the Second World War a US naval base was set up on the site to accommodate personnel charged with servicing vessels guarding the North Atlantic convoys.

The Americans maintained a presence until 1971 and during that time the base was renowned for having one of Ireland’s first bowling alleys. After the War most of the site was handed over to the British military who remained there until quite recently.

Commenting on the site, Robin Young, from the school’s board of governors says: “We looked at various sites but this one in the heart of Waterside brings everything together on one location.

“Foyle College will be 400 years old in 2017 so that will certainly be a big year for us, and to open the new school in that year is a tremendous thing.” 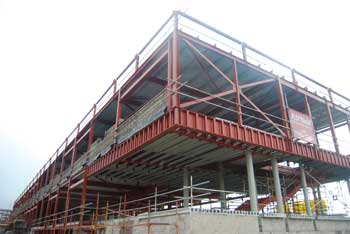 A cantilevering wing points the way to the campus main entrance 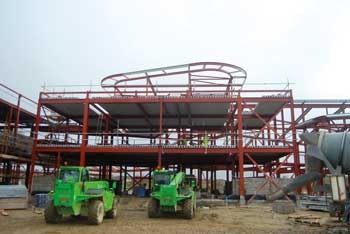 Roof pods are said to add volume to the structure 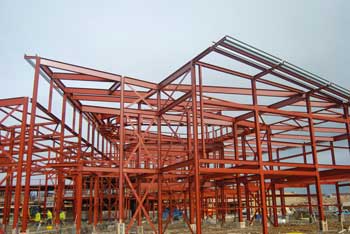 Work on what had been a vacant plot for a number of years began in the summer of 2015 with a large cut and fill operation. This work was needed to level the previously sloping site, prior to groundworks and the steel erection programmes kicking off.

The campus is essentially one large braced structure, with Ebrington Primary School single storey and the secondary part having elements up to three storeys high.

The secondary school (Foyle College) part of the campus is entirely steel-framed and consists of two-storey and three-storey teaching blocks, as well as a sports hall and gym, multi-purpose hall, and kitchen/dining area.

The attached single storey primary school areas of the campus are predominantly of masonry construction with a raking truss roof structure, with the exception of a large steel-framed multi-purpose/dining hall. Adjacent to the primary school there is also a separate stand-alone nursery school building containing two classrooms.

“The bulk of the project was always considered to be built with a steel frame supporting concrete planks because of its ease of construction,” says Mott MacDonald Project Engineer Andrea Johnston. “A steel frame with blockwork walls has also given the college flexibility, as classroom partitions can be removed in the future to create larger teaching spaces.”

Working on behalf of main contractor Heron Bros, Walter Watson is fabricating, supplying and erecting approximately 1,100t of structural steelwork for the project.

Using 50t capacity mobile cranes and a variety of MEWPs, Walter Watson began the steel erection with the structure adjacent to the primary school, which had already been built earlier in the construction programme. This area consists of a shared kitchen with separate dining halls for each school positioned either side.

“Both dining halls are single storey column-free areas with spans of up to 12m, created with roof level trusses,” explains Heron Bros Project Manager Paul McNamee. “To create the desired clear span, the primary school’s dining hall had to have a steel frame.”

Adjacent to the college’s dining area (block D), are a series of interconnected blocks (A, B and C) that contain the sports hall, three levels of classrooms, the main entrance and two levels of classes respectively.

Blocks B and C feature eye-catching conical steel pods that protrude above the top of the building and incorporate halo rooflights. Formed with a ring of columns and curved horizontal members, they are positioned within central communal areas and circulation routes that also double-up as informal teaching and performance spaces. The conical pods begin at ground floor level providing an interesting backdrop as they will be painted in various colours as a way-finding tool for staff, pupils and visitors.

Glazed halo roof lighting encircles the uppermost part of the pods allowing natural light to penetrate the communal parts of the school.

“The pods form a backdrop for an informal teaching wall or small performance space, as well as an information wall,” says Isherwood & Ellis Project Architect Mark Porter. “In this way they remain an interesting visual element of the school, but also functional.”

The pupil snack bar area (block D) also contains a halo rooflight pod, however this one is suspended from the roof via an arrangement of cantilevering steel beams.

In this way a clear space is left for the ground floor dining area, while above the same circular rooflights are provided. Viewed from outside, the three pods look similar and convey a sense of volume.

Visualisation of the completed campus

Entering the school grounds from the adjacent main road, the first part of the college visitors and pupils will see is teaching block E/F, which is a 60m-long finger block that extends out from the rest of the main school.

To create some visual drama the tip of the block features a 2.5m-deep first floor cantilever, highlighting the way towards the school’s main entrance.

The inset of the cantilever accommodates a terrace with a series of planters and steps that cascade down to meet the path that leads up towards the stone-clad entrance block.

The ground floor level of the southern elevation is set back forming a colonnaded walkway along its length. This block contains two floors of classrooms separated by a central corridor set out on a regular grid pattern.

Looking forward, Mr McNamee says the main logistical challenge for the project team will come next year once the primary school has opened.

“We will have to manage deliveries, fit-out and noise more tightly as the project team will be finishing off the college while students will be studying in the adjoining parts of the building.”