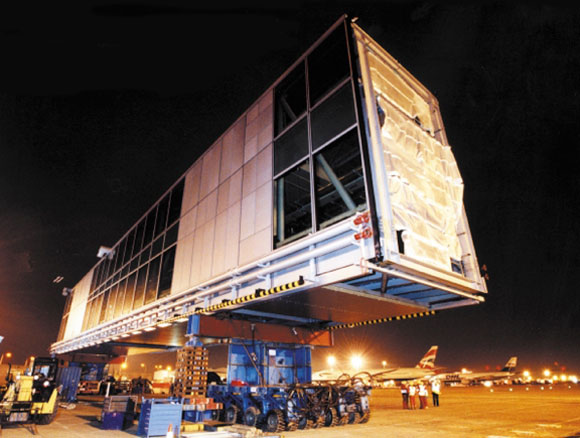 On 28 October 2002, a 320-ton steel bridge was moved across the south runway at Heathrow Airport to complete the link between two gate lounges of the £37m Pier 5 Phase 2 project. Barnaby Swann reports.

The Pier 5 (II) project at Heathrow involved the design and construction of a new departures lounge at Terminal 3, serving the remote aircraft stands located at the end of Pier 5. Passengers will access this new lounge from the end of the existing pier, via a new link bridge structure.

During the design of the link bridge, site constraints were a big factor. The site was located between two adjacent aircraft stands, which had to remain unaffected by any works during the airport’s normal operational hours. Although the gap between these stands was wide enough to accommodate the width of the bridge, there was no additional space for any construction activity.

In addition the bridge was positioned directly above an airside road which was in constant use. Both these constraints meant that the construction of the bridge could not be carried out during Heathrow’s core operating hours. The remaining construction window of five hours meant a significant premium would have had to be paid for night working and the short working windows also had programme implications.

Taking all the constraints into consideration, the design team produced various schemes for consideration by BAA. After much deliberation it was decided that the bridge should be fully assembled off-site approximately 1.5 miles away. It could then be moved into its final location at a convenient time. 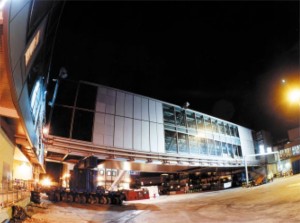 The pre-assembly of the bridge played a big part in its overall appearance. The main body of the bridge is 52m long by 6.5m wide and 10m tall and sits approximately 4.5m off ground level. It is two storeys high in order to segregate the arriving and departing passengers. Both elevations have a substantial amount of glazing to provide passengers with good views over the airfield.

The steel structure of the bridge, fabricated by Rowen Structures, consisted of two deep trusses located in the sides on the bridge with interconnecting beams providing the support for the floors and the roof. A system of horizontal bracing makes the whole structure into a very stiff box, which was crucial to the integrity of the glazing during the moving operation.

In its final location the bridge is hung from two ‘V’ shaped supports which are positioned at one end. Each ‘V’ consists of two tapered circular columns, which are fabricated from curved plates welded into the required shape.

Stainless steel tie rods are located at the top of the ‘V’ supports. This prevents the supports from spreading as the load is applied. At the opposite end, the bridge is supported by simple circular legs, which have pin connections allowing the bridge to move with varying thermal conditions. Stability of the bridge has been achieved through the stiff concrete cores located in the new lounge building and the vertical support columns.

Construction work started on the bridge in April 2002 on a temporary site set up on the airport perimeter near Terminal 4. The bridge was constructed on temporary steel trestles, which were anchored to the concrete apron. These trestles were positioned at the same locations as the final supports so that the bridge would take the same deflected shape throughout the construction stages. Once the steel frame was erected, the panellised roof, high quality curtain walling and a lightweight aluminium floor were added. Finally modularised mechanical and electrical services were added together with a 30m long passenger conveyor.

In mid-October 2002, Brambles, who were responsible for moving the structure, delivered two 48-wheeled, 12.4m long transporters to the temporary site. Lifting beams were attached to the bridge at two locations and climbing jacks were used to raise the bridge from its construction height of 2m to the approximate installation height of 4.5m. The transporters were then positioned under the lifting beams and held together with chains.

At 11:00pm on the night of 28 October Brambles were given the go ahead to start moving the bridge. As the 1.5 mile route involved crossing the south runway the move could not take place until the last planes had taken off and landed. The bridge moved across Heathrow at approximately 1.0 mph and arrived in its permanent location at around 12:30am. With a positional accuracy of 10mm the transporters were able to manoeuvre the bridge around various pieces of airport equipment and locate it into its final position.

The following night the ‘V’ supports were erected and connected to the top of the bridge. The bridge location was then adjusted using the transporters and bolted to the new lounge building. Finally on Friday 1 November the vehicles were lowered and disconnected from the bridge structure while the structure was monitored for deflection.

The successful installation and completion of the bridge was a milestone for BAA as this was the first time this type of construction had been attempted on such a large scale. With the project completed on time the client saved approximately £250,000 against building the bridge in a conventional manner. BAA’s goal is to maximise pre-assembly and the successful installation of the bridge will influence many future projects at their airports.

Barnaby Swann is a senior engineer at Buro Happold.