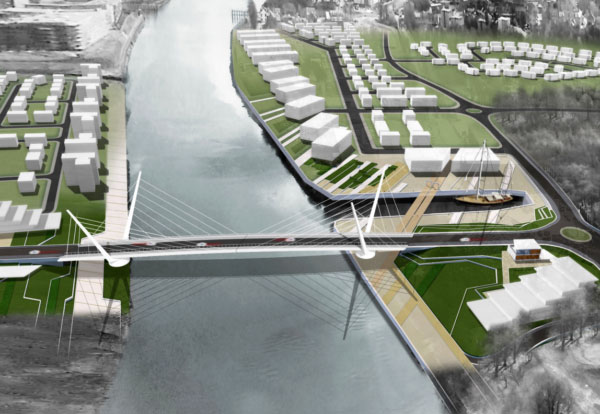 Scottish Government ministers have given the thumbs up to a major project to transform the Clyde waterfront with a new bridge and improved transport infrastructure.

The £90M Clyde Waterfront and Renfrew Riverside project includes a 184m-span road swing bridge, which has been designed by engineering consultant Sweco working with Kettle Collective, the architects behind the Falkirk Wheel.

The bridge will be constructed using a cable suspension system and is said to celebrate the River Clyde’s shipbuilding heritage in its design.

As the bridge opens and closes, the vertical masts rotate in a similar way to the turning motion of the cranes that once adorned the Clyde waterfront.

Spanning the River Clyde, the bridge will link Renfrew and Yoker and will form part of a package of new roads, walkways and cycle routes into a 150-acre site next to Glasgow Airport which is being developed into a manufacturing district.

Renfrewshire Council Leader Iain Nicolson, said: “Communities on both sides of the Clyde will benefit from greatly improved access to their work, to education and to hospitals through the new connections which will also help reduce congestion and improve journey times.

“It builds on the development of the new manufacturing district which will bring thousands of new high skilled jobs and training opportunities to Renfrewshire and the wider region and help secure the future of Scotland’s vital manufacturing industry.”