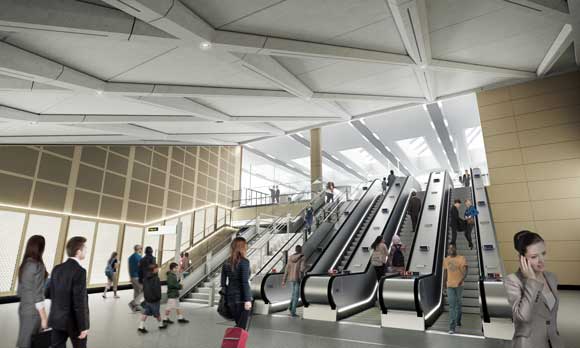 Over-site commercial developments will be constructed on top of Farringdon Station’s two new Crossrail ticket halls. Martin Cooper reports on how steel is helping to maximise the railway’s useable space.

Ticket halls for most of the 10 new stations on the UK’s latest railway line have been built with a steel frame, providing a quick construction programme and, importantly, a flexible future-proofed design.

Many of the ticket halls are located on prime central London plots and, in order to maximise the space and help Crossrail recoup some of its investment, the steel frames have been designed so that over-site developments can be accommodated at a later stage.

These future developments will also be steel-framed structures that can be bolted to and erected on top of the ticket halls.

An example of this work is Farringdon Station where two separate steel-framed ticket halls are under construction.

“The Farringdon ticket halls have been designed with a 120-year lifespan, so we envisage a few commercial schemes being built and then replaced during that time. The steelwork has been designed to not only accept the loadings from the over-site developments, but also the loadings that would be generated from the construction work,” explains AECOM Technical Director, Advanced Structures, David Sharples.

Farringdon is at the heart of the Crossrail Elizabeth line route and will be a key link in bringing passengers directly from within Greater London and beyond to the business hubs in the City and Canary Wharf. When complete, over 140 trains per hour will flow through the Farringdon interchange.

The western ticket hall will have an entrance on Cowcross Street directly opposite Farringdon Tube station. This hall will share its entrance with the existing Thameslink ticket hall (erected by Bourne Steel in 2011, see NSC June 2011).

The eastern ticket hall will have entrances at the Long Lane end of the station, on Lindsey Street and Hayne Street. It will also provide an interchange with the London Underground platforms at Barbican station.

The design of the east ticket hall has used a series of raking columns to avoid loads being transferred to the shallow London Underground tunnel, which passes under its northern façade close to Barbican Station.

Diagram illustrating the positions of the western (left) and eastern ticket halls. The Crossrail line is in yellow, the existing Thameslink line is in pink and the Underground lines are in grey

“To ensure flexibility and allow over-site office developments to be erected on top of the tickets halls, the steel frames are far more substantial than they would ordinarily be for buildings of this size,” explains Bourne Steel Project Manager Richard Cherrington.

To this end, the columns used in each hall are a mixture of heavy sections such as UC356 × 406 × 634 and bespoke fabricated columns weighing up to 25t each. There are also a number of columns which are box girders made out of 100mm thick plate, and these members required four 100mm-thick butt welds running 17m in length.

Because of the provision for the commercial blocks, the ticket halls will initially only have a protected water-proofed concrete slab on metal decking as a rooftop finish. This will allow the over-site developments to be built without causing any interference to rail services or passengers.

Within the steelwork package, the largest elements that Bourne Steel has erected are two 21m-long × 4m-deep trusses, installed parallel to each other and inter-connected. 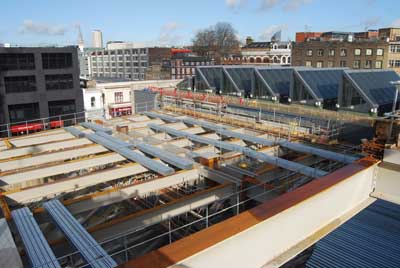 The trusses, at the western ticket hall, provide column-free space within the apse, diverting the over-site development’s loadings down to the foundations as well as acting as a support to the Crossrail ticket hall’s apse ceiling.

The apse feature sloping ceiling is hung from the trusses and spans the escalators that connect the ground floor entrance lobby to the -1 level circulation area, from where a further set of escalators will connect to the underground platforms.

A lot of discussions were held between the project team members about the best way of installing the precast apse roof and the trusses, and in particular which order it should be done in.

Bourne Steel suggested the apse ceiling should be installed first and then its steel, including the trusses, erected afterwards. Following an investigation by the main contractor, Bourne Steel and the concrete sub-contractor, this was agreed as the practicality of lifting the large apse precast units into place with the steelwork already erected would have been extremely challenging.

“The trusses were erected over the precast apse ceiling in sections. The first section, which weighed 24t, was connected to the main supporting column and a jack that was being supported off the apse ceiling, which was itself supported on temporary falsework.

“The trusses also had to be tied into the surrounding steel. Each section was then connected while landing on jacks. Once all sections had been installed and splice connections bolted up – some connections had 120 TCB bolts – the truss was de-jacked in a controlled manner, until it was just being supported by the two columns.”

The western ticket hall has dimensions of approximately 75m long × 62m wide. The steel commences at Level -1 and extends to Level 3 which is formed by a series of 18.7m-high columns. The upper levels accommodate the large tunnel ventilation fans and other Crossrail plant rooms, administrative space and staff areas.

The smaller eastern ticket hall is approximately 69m long × 33m wide. The steel commences at Level 0 and extends to Level 3 which covers 15m in total, which equates to just one column length.

Both steel-framed ticket halls will open when the Crossrail Elizabeth line services begin in December 2018. By then both over-site developments may have begun. 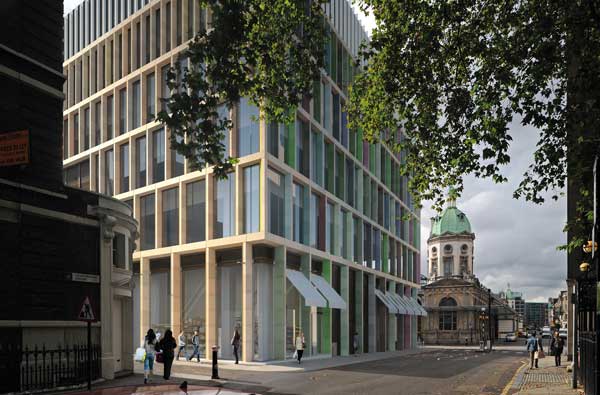 The over-site development above the western entrance of Farringdon Crossrail station will comprise a 17,400m² six-storey high-quality office space, with retail units at street level.

The building is said to have been carefully designed to integrate with Crossrail’s operating station and will also improve local views of St Paul’s Cathedral.

Ian Lindsay, Crossrail Land and Property Director said: “By 2018 Farringdon will be one of Britain’s busiest rail stations, connecting Crossrail, Thameslink and London Underground services. The developments will accelerate the area’s regeneration, helping Farringdon re-emerge as a destination in its own right.”

Above the eastern ticket hall (pictured), planning has been approved for a 11,100m² six-storey column-free office space with a ground floor reception area and retail units.