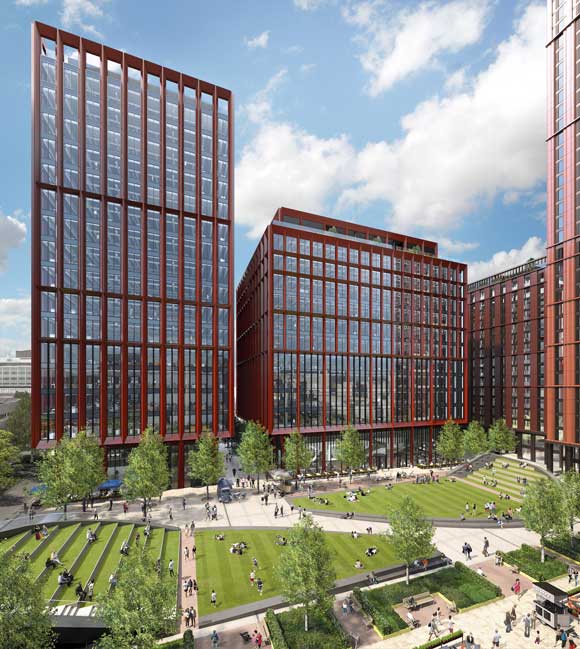 Structural steelwork has been chosen as the framing solution for two commercial blocks on a multi-million-pound mixed-use scheme in central Manchester.

FACT FILE
Circle Square Buildings No. 2 & 4, Manchester
Main client: Bruntwood and Select Property Group
Architect: Feilden Clegg Bradley Studios
Main contractor: John Sisk & Son
Structural engineer: Curtins
Steelwork contractor: Billington Structures
Steel tonnage: 3,760tA large plot that was once the home of BBC North West and the facility which hosted the filming of many TV favourites, such as A Question of Sport and Mastermind, is now being transformed into a new neighbourhood known as Circle Square.

The £750M mixed-use development will offer office space, retail outlets, serviced apartments and private residential accommodation as well as communal spaces that will be open to the public.

Being built over three phases, to be completed by 2023, the first phase is now well underway. This initial phase, being constructed by John Sisk & Son, includes two residential blocks and two adjacent commercial buildings that are designated buildings two and four, which will top out at 17-storeys and 13-storeys respectively.

Both commercial buildings are steel-framed structures, compositely designed with steel beams supporting metal deck flooring and a concrete topping. The beams are all bespoke plate girders containing holes to accommodate the services within their depth. 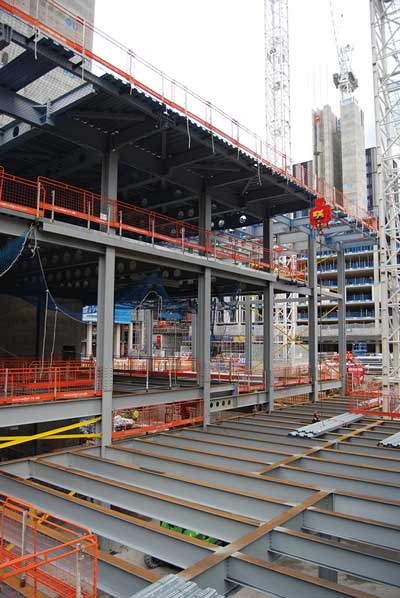 Both buildings have compositely-formed floors 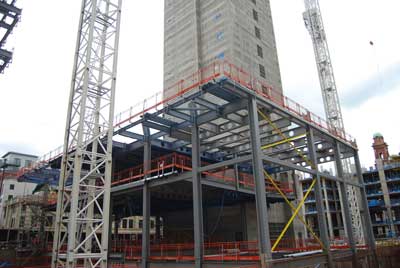 Steelwork wraps around a centrally-positioned core in Building No. 4

“Using steelwork for these two buildings was all about getting clear open internal spans, which is always important for modern commercial schemes,” explains Curtins Structural Project Coordinator Paul Milne.

Emphasising the need to create the maximum amount of floor space, building No.2 has a smaller footprint than its neighbour and consequently features an offset core, located along its northern elevation.

“This allows all of the office floorplates to have clear uninterrupted spans up to 12m-long,” adds Mr Milne.
Meanwhile, No.4 has a much larger footprint and so its design has a more traditional centrally-positioned stability-giving core. With beams radiating out from the core, the building features internal spans of up to 14m on all four sides.

The buildings are founded on 705 bored piles and share a large basement. All internal columns go down to the basement slab, while the perimeter members are supported on the concrete retaining walls of the subterranean level and begin at ground floor.

Aside from the cores, they have similar designs, with each commercial floorplate – from level one upwards – having the same grid pattern. The ground floors are slightly different, as they will accommodate entrance foyers and retail outlets within a mostly double-height space.

The most visual difference between the structures, apart from their heights, is the fact that No.2 has a 3m cantilever from the second floor upwards along its main Oxford Road and Brancaster Road elevations.

No.4’s design features raking columns that splay outwards from level two to the underside of level five along the Oxford Road elevation. This increases the footprint on the upper levels, although the raking columns will not be visible from the outside in the completed scheme as they will be behind the cladding line.

According to Billington, this raking architectural feature means the second and fifth floors are heavily braced in plan in order to transfer the extra loadings to the concrete core.

Both commercial buildings, along with the two residential blocks being constructed by John Sisk & Son, will be complete by early 2021.

Watch a time lapse video of the Circle Square development at https://www.youtube.com/watch?v=bZY8oEcF_GQ 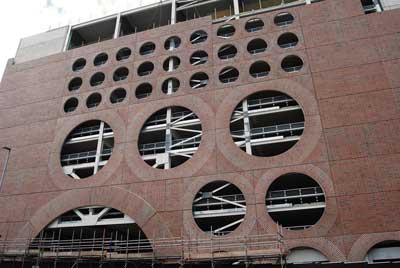 The cladding has holes allowing the steel frame to be visible

As well as fabricating the project’s steelwork, James Killelea has also been employed on a design and build basis for this unusual car park.

The structure has 10 parking levels, more than the average facility, but what marks it out as unusual is the fact that it will support a six-storey 158-bed hotel on top of its upper level.

Supporting a hotel would be challenging enough, however the design has also had to incorporate large bridging elements as there are two subterranean 600mm-diameter water pipes crossing the site.

“It’s a very unusual design and one that was originally designed as a concrete-framed structure,” says James Killelea Senior Structural Engineer Charlie Twist.

“However, the bridging parts would have proven to be too difficult to build and consequently a steel-framed solution was chosen for the car park, which in turn supports a precast concrete hotel.”

A series of four × two-storey-deep lattice girders and a single one-storey girder, all measuring up to 27m-long, span over the zone where the underground pipes are located. In these parts, the car park has no first floor level as the local water board needed a 5m ground-to-ceiling clearance in case they had to undertake any maintenance works.

Consequently, the first floor is only a partial level and is set within the depth of the larger lattice girders, as is the second floor, while the third level is supported on top of these members.

Elsewhere in the car park, which has an overall footprint of 64m × 60m, the majority of the structure features a regular column grid pattern of 3m × 15m. 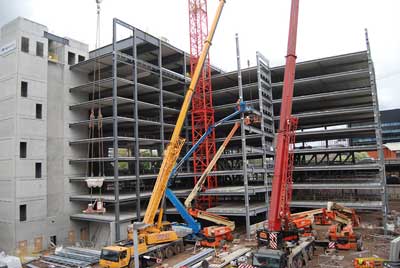 The steelwork’s stability is derived from four cores

Taking into account the loadings the hotel will impose on the car park’s steelwork; some large members have been used in the design. Most of the beams are 1.7m-deep plate girders, while some of the columns, especially those supporting the lattice girders are 356 × 406 × 634 sections with 200mm-thick base plates.

The design also incorporates four concrete cores, one in each corner, that provide the structural stability along with strategically-positioned cross bracings.

Precast planks form the floors and these are being installed by James Killelea as the steel erection progresses.
The car park has been designed as a Vertical Circulation Module (VCM), which is said to offer a more efficient solution for confined city plots. This design contains no external ramps as all of the circulation is via slopes within the floors, which creates more parking spaces.

Concept architect for the car park and hotel, Feilden Clegg Bradley Studios, have produced a design that reflects the city’s industrial past. Inspired by the nearby 19th century warehouses, the building’s façade is being constructed from a pre-cast concrete panel system, utilising inset bricks which draw on Manchester’s rich links to the grand infrastructure of the Victorian era.

A series of round openings in the façade allow the steel frame to be visible from outside, making it part of the overall architectural industrial vision.

Bruntwood Chief Development Officer Chris Roberts says: “When complete, Circle Square will be home to a wide selection of innovative workspaces, shops, homes and bars and it will attract visitors from far and wide. The car park and hotel will play a key role in supporting the high level of interest that we anticipate.”